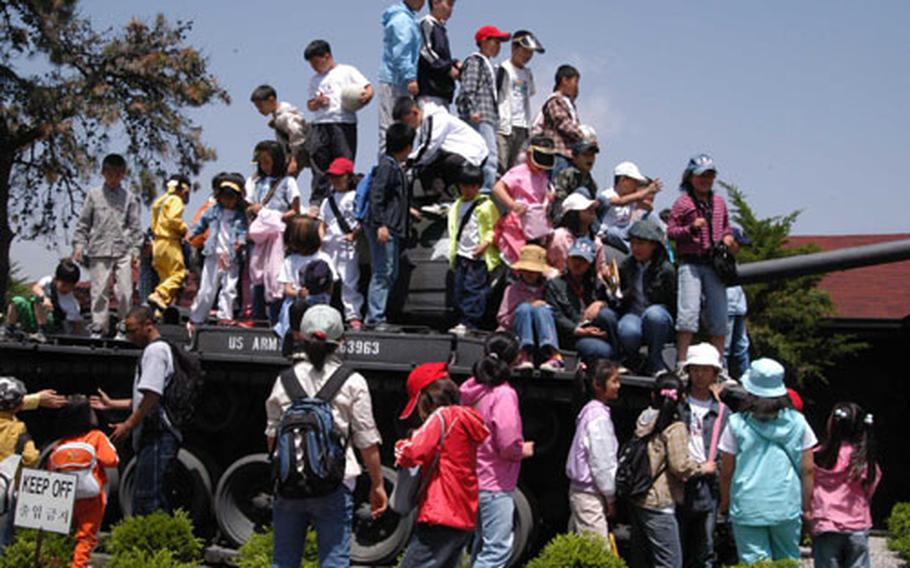 Children from Bojang school, near Rodriguez Range in Area One, enjoyed climbing on this tank during a visit to Camp Red Cloud on Tuesday. (Seth Robson / S&S)

Children from Bojang school, near Rodriguez Range in Area One, enjoyed climbing on this tank during a visit to Camp Red Cloud on Tuesday. (Seth Robson / S&S) 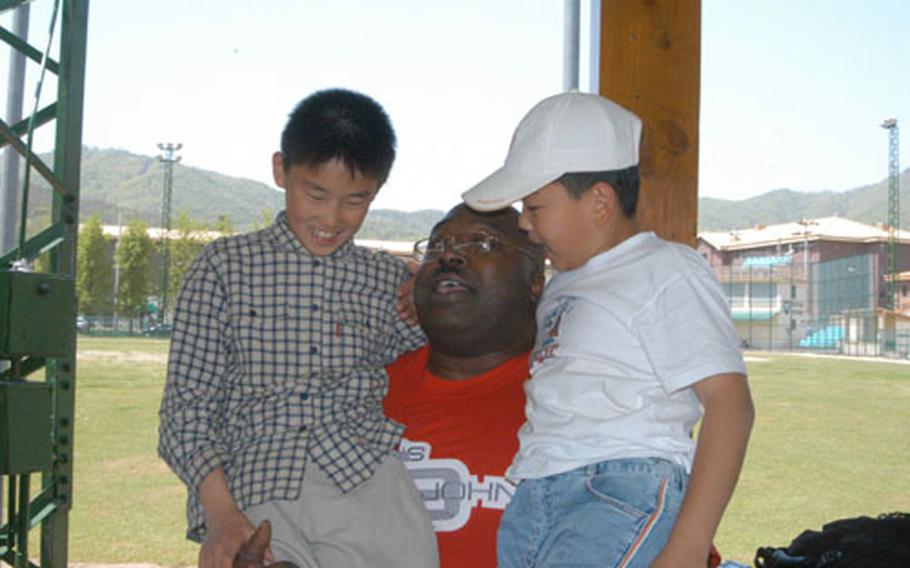 CAMP RED CLOUD, South Korea &#8212; The 2nd Infantry Division is reaching out to those living near Rodriguez Range in Area I to minimize community anger over the facility&#8217;s environmental impact.

Sixty children from Bojang School, one of two schools near Rodriguez Range, visited Camp Red Cloud on Tuesday, where they were treated to sports, lunch, a tour of the 2nd ID Museum and other activities supervised by U.S. soldiers.

Se-Jong (Daniel) Lee, the assistant director in charge of civil-military relations for Gyeonggi Provincial Government, accompanied the children and said his office is preparing a series of programs to promote relations between Rodriguez Range and nearby residents.

The range is operated by the 8th Army but used mostly by the 2nd ID.

&#8220;Citizens living in Paju and Uijongbu get some benefits&#8221; from nearby U.S. Army facilities, Lee said. Soldiers &#8220;use local supermarkets and bars. But at Rodriguez Range, residents don&#8217;t get any benefit because the soldiers don&#8217;t use any facilities outside the training area.&#8221;

People living near the range have complained about noise from guns and aircraft, interference with television reception, damage to crops and farm animals and pollution in local waterways caused by a leaking fuel bladder at the range in March.

Noise from the range distracts children studying at Bojang School and another school in the area, Lee said.

U.S. soldier volunteers &#8220;will visit the two schools regularly and teach them English, and soldiers will visit an old folks home,&#8221; Lee said.

The 8th Army is hosting the Korean Folklore games during South Korean holidays in September and February, he added, with prizes awarded by Lt. Gen. Charles Campbell, the 8th Army commander.

The 8th Army also will dredge some 273 yards of riverbed polluted by the leaking fuel bladder.

Lee said fast action on the fuel pollution was achieved after Gyeonggi officials wrote directly to 8th Army instead of waiting for citizens to resolve the issue through processes outlined in the Status of Forces Agreement.

On Tuesday, so many children toured the 2nd ID Museum that half of them had to sit watching cartoons while the rest walked around the exhibits. The boys seemed particularly excited by the museum&#8217;s collection of antique firearms and soldier mannequins posed in fighting positions.

A sea of hands went up when their teacher asked for volunteers to don a U.S. Army helmet and rifle from the Korean War era.

Later the students ate lunch, supplied by Mitchell&#8217;s restaurant, at the camp&#8217;s new barbecue pavilion. They also played on inflatable jungle gyms and took on soldiers at soccer and volleyball.

Sgt. 1st Class Howard Williams, of the 2nd ID&#8217;s Headquarters and Headquarters Company, looked like a giant as he lifted children, two at a time.

Williams said the day reminded him of visiting his nieces and nephews back home.

Bojang School sixth-grader Kim Eun Ae, 13, was visiting a U.S. base for the first time.