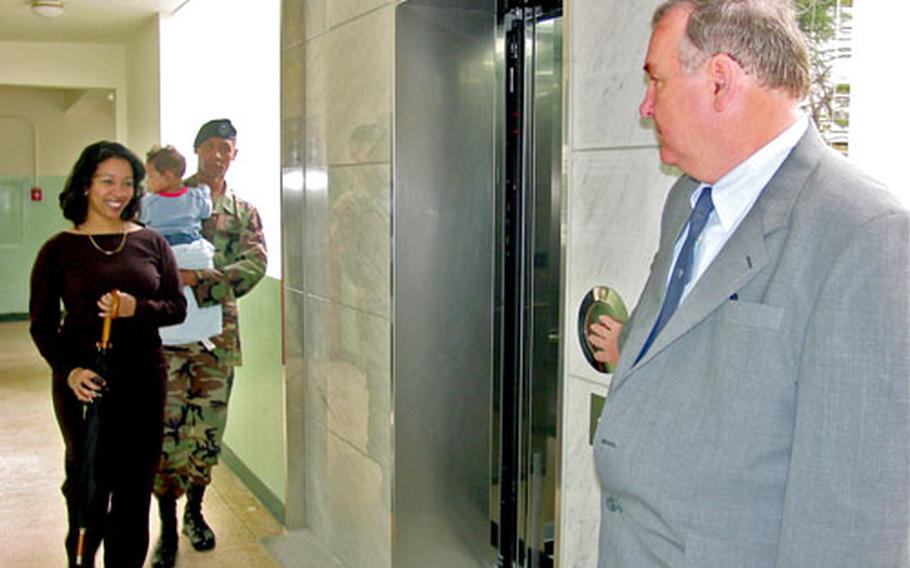 The days of climbing four flights of stairs with a heavy load of groceries are over for Anastasia Brown in her apartment building at Camp George in Daegu, South Korea.

Newly installed elevators began operating Friday at Buildings B, C and D. They&#8217;re the first elevators in Camp George&#8217;s apartments since the five-story structures went up 20 years ago.

The three elevators are part of a $1.5 million project under which the Army eventually will have installed an elevator in each of the 10 apartment buildings at Camp George&#8217;s Mountainview Housing Area, Youngblood said. Installing a single elevator costs $151,782, according to officials.

The Korean National Housing Corporation is carrying out the project. It also manages the housing complex.

Elevator installation work began May 1 in Buildings B, C and D. Elevators also are planned for Buildings A, E, F, G, H, I and J. Work on those buildings began June 1 and is to finish by May 31, and maybe sooner, Youngblood said.

Buildings A and H also will have ramps to help handicapped people get to the elevators, he said.

Besides the housing area, Camp George is the site of the Taegu American School.

It&#8217;ll also mean her children won&#8217;t have to lug heavy book bags to the fourth floor after school.

Youngblood said about 15 spectators were on hand Friday morning to watch the Brown&#8217;s ceremonial first ride.