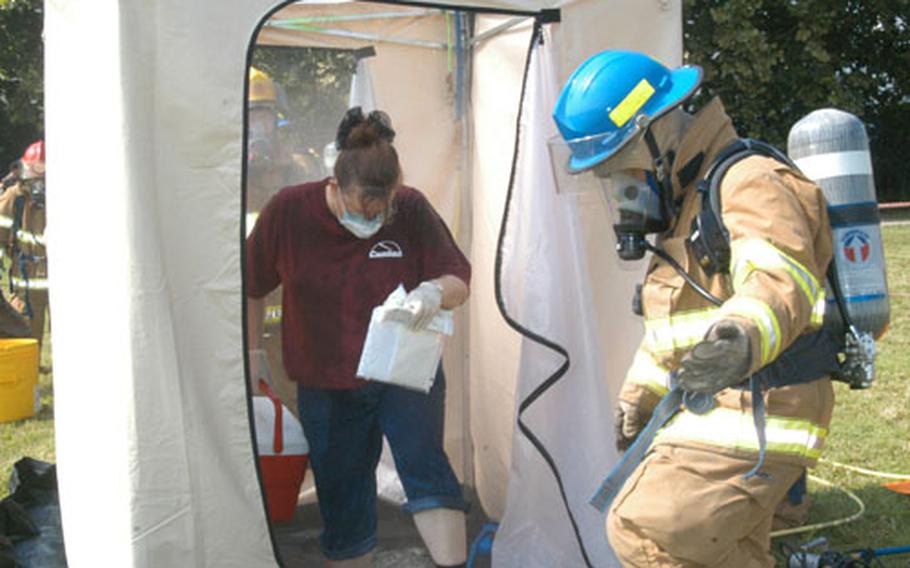 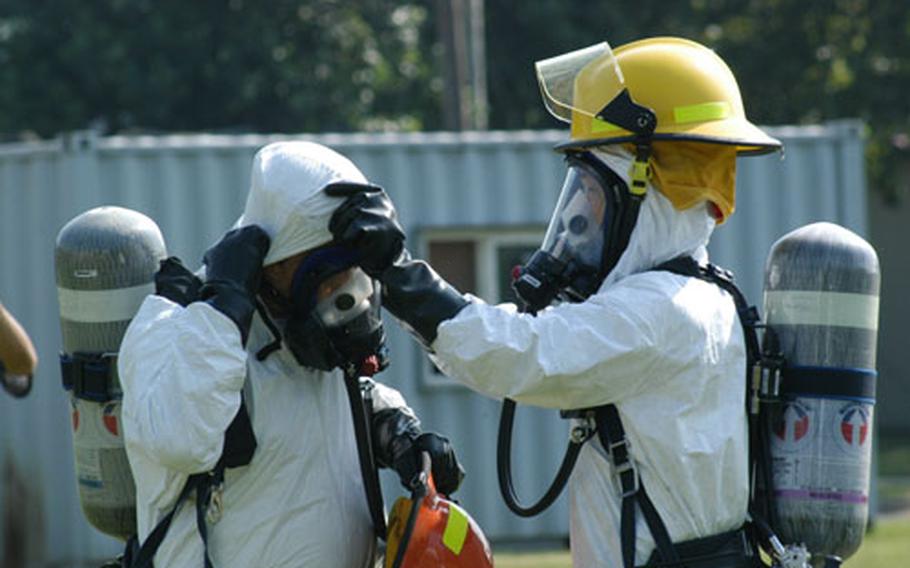 Camp Walker firefighters check each other&#39;s equipment before responding to a simulated biological attack at nearby Camp George in July. (Courtesy of U.S. Army)

The U.S. Army&#8217;s fire stations in southern South Korea now are equipped to handle the kinds of chemical, biological and other terror-related hazards that became part of their duties in the aftermath of the Sept. 11, 2001, terror attacks, officials said Wednesday.

The equipment is used for what firefighters call hazmat, or hazardous materials, incidents. It will be used in responding to CBRNE &#8212; chemical, biological, radiological, nuclear and explosive &#8212; incidents, Purvis said.

New items range from breathing tanks and hazardous materials suits to meters that detect toxic agents and explosive materials at the scene of an emergency, Purvis said.

Since the attacks, he said, the Defense Department assigned fire departments a key role in responding to emergencies involving CBRNE.

Military Police &#8220;are of course part of first responders, and they will be more or less securing the area and helping evacuate. But the fire department will set up the decontamination zone and start the rescue operations,&#8221; Purvis said.

The first shipment arrived in June, said Purvis, and a final shipment came in last month.

About 70 percent of the gear has been distributed to area fire stations, and firefighters were trained for its use the same day, Purvis said. Firehouses will receive and train on the rest of the equipment this month, Purvis said.

&#8220;The new equipment that the fire department has received significantly upgrades their ability as first responders to respond to incidents such as hazardous materials and weapons of mass destruction,&#8221; said Kevin B. Jackson, chief spokesman for the Area IV Support Activity at Camp Henry. &#8220;It also upgrades our ability to provide better force protection for the military communities within Area IV.&#8221;

Because of the shipments, firefighters will be able to pull up to a hazardous materials scene wearing improved breathing equipment, including an air compressor that will fill their air tanks, and air tanks that contain a 60-minute air supply, twice that of previous tanks, Purvis said.

Other items include an inflatable shelter system used in decontamination efforts at a hazmat scene. Among its uses would be initial treatment of the injured.

Still other items the fire department received included decontamination scrub brushes, shovels, equipment for absorbing and containing the spread of hazardous liquids, plugs for sealing leaking drums and other containers and drain guards for sealing manholes &#8220;so that we can contain the spill from getting in the drain system and leaving the base,&#8221; Purvis said.