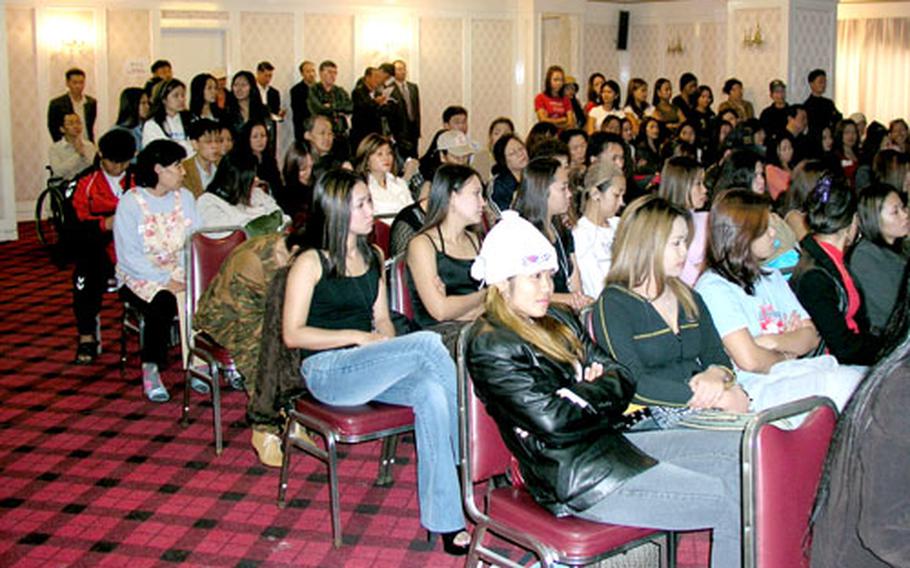 &#8220;Yes! Yes!&#8221; some of the women exclaimed during a brief but sharp wave of applause at a training session on prostitution and human trafficking held near the U.S. Army&#8217;s Camp Humphreys in Pyeongtaek City. The hourlong session was hosted by the U.S. Army&#8217;s Area III Support Activity at Camp Humphreys and Pyeongtaek City officials.

Withholding employees&#8217; passports can be a sign of a club owner involved in prostitution and trafficking, law enforcement authorities have said.

Almost 200 people, including local club owners and their mostly Philippine female staff, attended the session at the Enterprise Hotel, just a few blocks from Camp Humphreys.

About 15 of Anjung-ri&#8217;s clubs are licensed to employ foreigners. Almost all their female workers &#8212; about 90 to 100 &#8212; are from the Philippines, Kim Ki-ho, Anjung-ri Merchants Association president, said Tuesday.

He also spoke of his commitment to curtail underage drinking by U.S. servicemembers. Area III has produced special calendars and hand stamps Taliento distributed to club owners at the session. A club can display the calendar near the bar, adjusting it daily to show the date a U.S. servicemember would have to have been born to meet USFK&#8217;s legal drinking age of 21. Those of age would have their hands stamped.

&#8220;I hope these tools will help the community help with our policy&#8221; against underage drinking, Taliento said.

Area III officials also reminded club owners that when &#8220;credible&#8221; evidence, such as that obtained by undercover police, indicates a club has been supporting prostitution or human trafficking, Area III would place the business off-limits to U.S. personnel, in keeping with USFK policy.

They explained how such clubs could seek to have off-limits restrictions removed and urged female workers who believe they&#8217;re being coerced into prostitution or human trafficking to contact authorities.

&#8220;We have to help each other,&#8221; Kim, the merchants association president, said in an interview after the session, because clubs put off-limits stand to lose thousands of dollars in income and see their customer base dwindle.

One female bar worker, who gave her name as Christine, said afterward that she thought the session could help &#8220;a little bit.&#8221; But she questioned whether club owners would apply what they&#8217;d heard.