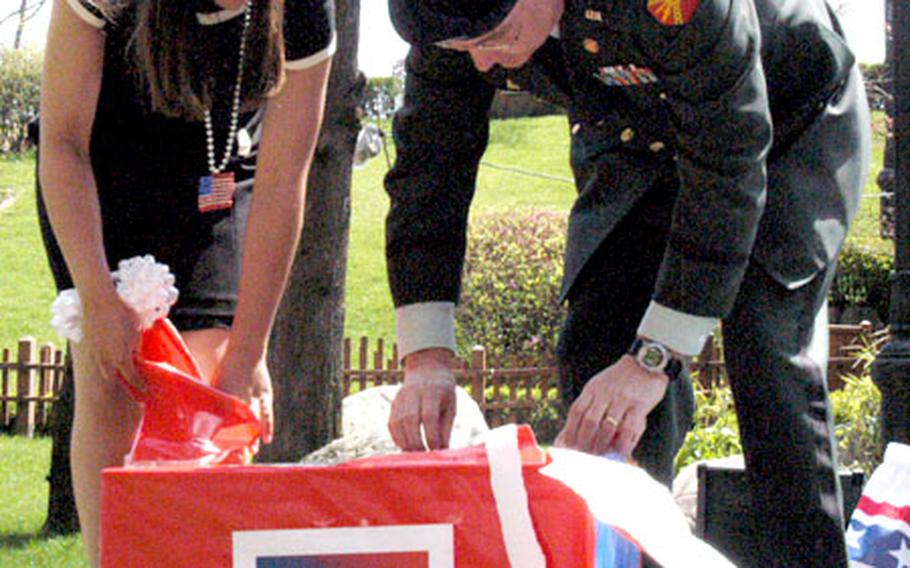 Lindsay Laughridge, 13, and Area II Commander Col. Timothy McNulty open a gift for Lindsay, part of her award for being the youth Volunteer of the Year. (Teri Weaver / S&S)

YONGSAN GARRISON, South Korea &#8212; Sixteen people were honored Thursday for their volunteer work throughout Area II, where the number of hours donated to charities, health groups, sports teams and other organizations doubled in the past year.

Volunteers donated 221,000 hours of their time since April 2004, said Area II Commander Col. Timothy McNulty. He said it was roughly twice the number as during the previous 12 months.

&#8220;I think it was just because people ponied up to give their time,&#8221; he said after the short ceremony at Dragon Hill Lodge on Yongsan.

Erica Koonmen, recognized as Area II Volunteer of the Year, received an AAFES gift certificate and two round-trip tickets to anywhere in Asia.

Koonmen said she still was shaking after the announcement. She volunteers with the Girl Scouts and at the Chosun Gift Shop, where she helped computerize purchases during the past year. She and her husband, Lt. Col. Jeff Jerde, have been in South Korea for about 18 months. Jerde is a nurse anesthetist at the 121st General Hospital.

&#8220;I&#8217;m, like, blown away,&#8221; said Laughridge, who helped this year with a cleaning and beautification project at her school. She received an AAFES gift certificate and a portable stereo.