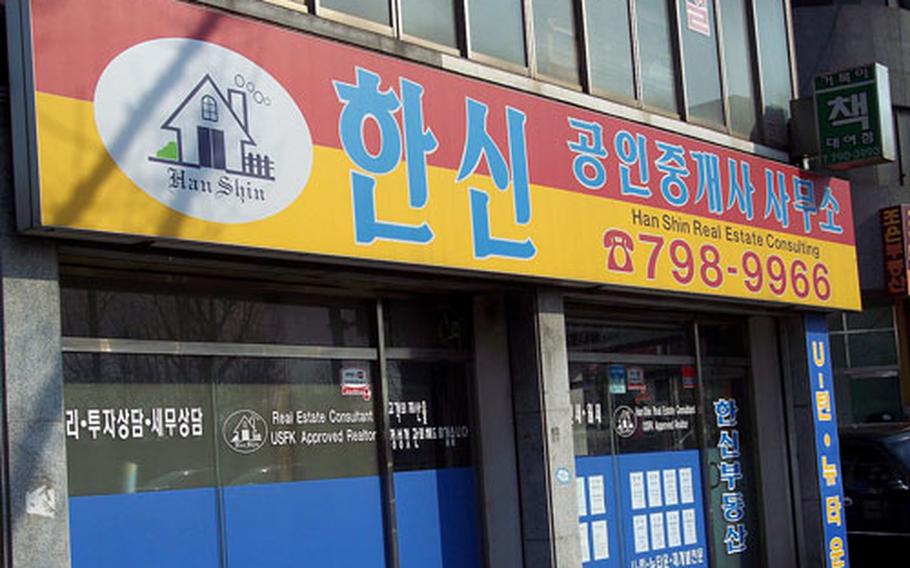 Han Shin Real Estate Consulting, located across the street from Yongsan Garrison, South Korea, is one of more than 40 formerly approved companies that was left off the March 2 list of U.S. Forces Korea&#39;s approved real estate brokers. (Erik Slavin / S&S)

SEOUL &#8212; A decision to cut the list of Area II-approved real estate brokers from more than 60 down to 21 has some who&#8217;ve passed muster applauding a move that they say will remove unethical practices.

Meanwhile, some newly unapproved brokers say that fraud may have occurred in a few cases, but add that the March 2 list is more about one housing employee&#8217;s revenge than fair practice.

&#8220;There have also been some allegations of bribery and kickbacks,&#8221; McNally said. &#8220;In the past six months, the Housing Division has had to reply to six Criminal Investigation Division investigations involving Realtors practicing illegal activities.&#8221;

Housing officials might add some of the real estate agents back to the list next month, McNally said.

This practice is legal, said Kim Hyun-jung of the Land Register Division of Yongsan District Office. But it doesn&#8217;t meet Area II&#8217;s criteria, and that is probably why one broker whose firm works mostly with servicemembers says it is no longer on the list.

The broker and others sent an e-mail to the Area II housing office asking why they were no longer approved and received no response, the broker said.

However, she claimed that isn&#8217;t the case with her company and some of the others.

Some say they believe that the new list of pared-down brokers isn&#8217;t about higher standards, but rather favoritism by a longtime housing official.

Kim Dong-sik has worked for USFK for more than 25 years and once served as a housing manager. He still works for the Area II Housing Office, though not as the office&#8217;s head.

From 2001 to 2003, the Army investigated Kim three times on allegations of bribery, conflict of interest and intimidation. Although investigators told Stripes they had no doubt he was guilty, no charges were ever filed.

In November 2003, Kim received a letter from Lt. Col. Steven Roemhildt of the Directorate of Public Works that stated: &#8220;I have lost confidence in you and no longer trust you to faithfully execute the responsibilities of your position.&#8221;

However, Kim had not yet received a final review and apparently was retained.

In 2003, Kim said he was the victim of overzealous investigators and that he fought hard to keep real estate brokers and landlords from ripping off the base.

On Friday, Kim declined to comment and directed all queries to public affairs officials.

Goo Yoon-young of the Area II-approved Acres and Dollars Realty says Kim is an innocent man. She also praised the military for setting the new standards and eliminating those &#8220;who have contributed to distorting real estate markets and doing harm to USFK customers and licensed realtors.&#8221;

Nevertheless, one de-listed broker complied with the added paperwork, only to lose the deal when the contract came back with a new two-paragraph stamp saying that the housing office has &#8220;limited ability to assist&#8221; personnel who sign with unapproved brokers.

The broker said he doesn&#8217;t know a single servicemember who signed the deal after reading the warning stamp.