Area II commander settling in after a month on the job 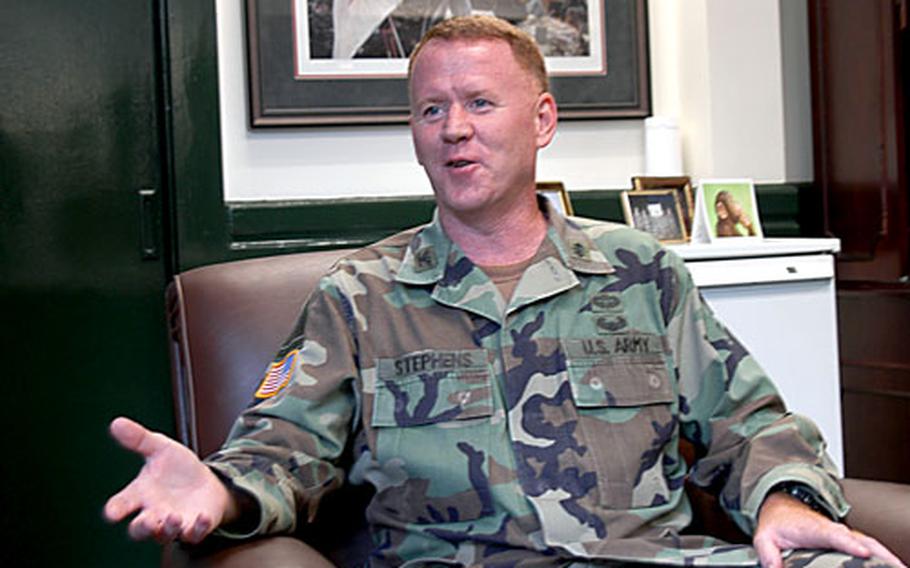 Col. Ronald C. Stephens, the new Area II Support Activity commander, says he wants to tackle problems quickly. “If you see something you can fix, fix it,” he said. (T.D. Flack / S&S)

YONGSAN GARRISON, South Korea &#8212; Quality-of-life services for servicemembers and their families should continue at current levels through the next fiscal year, according to the Area II Support Activity commander.

Col. Ronald C. Stephens said he&#8217;s still awaiting official word on the new budget year, which begins Oct. 1. But at least so far, he&#8217;s anticipating getting enough money to maintain programs such as youth sports and facilities such as barracks repairs on par with this year.

Still, money for facilities maintenance and services has been tight, and he doesn&#8217;t see that changing in the near future, Stephens acknowledged during an interview Monday.

Stephens took over as the Area II Support Activity commander for the Installation Management Agency, Korea Region Office, on July 14. In his first month on the job, he&#8217;s been meeting local South Korean officials, sitting through numerous budget meetings and learning about U.S. Forces Korea&#8217;s repositioning to the central part of the peninsula.

His mission, he says, involves helping servicemembers be ambassadors in a foreign country and taking care of military families who live on and use the bases in the Seoul area.

Stephens said he&#8217;s adopted the same philosophy as his predecessor, Col. Timothy McNulty, who left in July. The new commander has instructed his staff to use initiative to solve problems as quickly as possible &#8212; &#8220;If you see something you can fix, fix it,&#8221; he said.

He&#8217;s also asked for help from another source: the wives of the generals and commanders who live at Yongsan. These women often run many of the volunteer programs, attend on-base activities and hear from a host of people who might not turn to an installation leader when problems arise, he said.

Stephens said much of his job in the next two years will involve preparations for the move south. Yongsan Garrison, which now covers 635 acres, will shrink to about 20 acres.

Stephens said he also is quickly learning how servicemembers&#8217; behavior off post can quickly translate into good, or bad, diplomacy.

He&#8217;s visited the Itaewon bar district once already to view the scene, and he plans to go again in the next few weeks to inspect some of the bars currently listed as &#8220;off-limits&#8221; to servicemembers. Most of the bars banned to servicemembers support prostitution, something USFK leaders cannot condone, he said. He said he&#8217;s also planning to meet with Itaewon&#8217;s bar and restaurant association.

Stephens was stationed in South Korea in 1983 with the 2nd Infantry Division&#8217;s 102nd Military Intelligence Battalion. He is an Operation Desert Storm veteran who has served in a variety of leadership positions, including Information Assurance Branch Chief, J6, Joint Staff at the Pentagon and Combat Support Arms Division Chief, Human Resources Command.