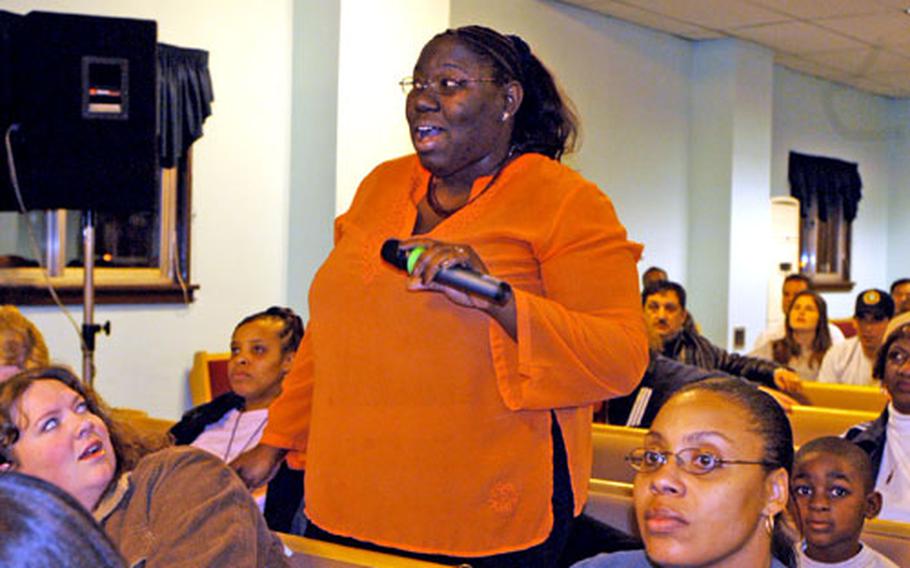 Shereece Payton, a Hannam Village resident, asks why she can’t move to a larger apartment when her current one does not meet her family size requirements set by the Army. Area II officials said it’s a common problem because most of the available on-post housing is not built to current size standards. (Teri Weaver / S&S)

HANNAM VILLAGE, South Korea &#8212; In Victoria Mounts&#8217; apartment, ants have eaten through a pink, button-down shirt. She has neighbors who have to shake the insects from their clothes before getting dressed.

Sgt. 1st Class Sharon Oliver says she has to deal with sewage backup each time she showers.

About 100 people came to a town hall meeting Thursday night to tell Area II commander Col. Ron Stephens, who is in charge of installations throughout the Seoul area, about their constant frustrations with the conditions and attempted repairs of their homes.

Stephens and his staff listened for two hours and recorded each complaint, many of which already had reached his desk before the meeting. Stephens, who took command about six months ago, said a plan is due in about two weeks to begin to address some of the problems of small quarters, faulty plumbing and insect infestation.

Hannam houses about 1,000 people &#8212; soldiers, civilian workers and some contractors &#8212; in a collection of apartment buildings a few miles from Yongsan Garrison. The distance from the main U.S. military base is short, but there is no direct subway route and traffic can make the short commute onerous, many said.

Still, most of the residents Thursday night said they don&#8217;t want to move. They like the close-knit living, where soldiers have volunteered to host summer basketball camps and customers know the commissary manager by name.

But they say they are tired of being told to wait for improvements to the aging apartment buildings. Already, some residents have moved out of one dilapidated building undergoing renovations. That building&#8217;s improvements may offer solutions for some, said Lt. Col. Paul Legere, who works with the Department of Public Works for Area II. Other solutions might mean moving off-post, he said.

Some of the complaints focused more on quality of life, and Stephens solved a couple on the spot.

Yes, access to the back gate to the base should match curfew hours.

Yes, Youth Sports should see about starting leagues on Hannam in addition to Yongsan.

Yes, the library should have a fresher rotation of books.

And, yes, the youth center can get an indoor basketball hoop as soon as possible, he said.

But the plumbing and insect problems are the ones that bothered Stephens the most, and he urged residents to record incidents and forward them to his staff.

As winter drags on, another problem has come up. One resident, a volunteer building representative for dozens of families, complained that housing officials did not have enough space heaters to pass out to make up for the frigid apartments.

&#8220;A lot of the people in my building was sleeping with their ovens on&#8221; and the oven doors open, the warrant officer told Stephens and other officials.

When Legere warned him and other residents not to use ovens as heaters, the warrant officer balked.