Are new technologies to blame for combat zone misconduct? 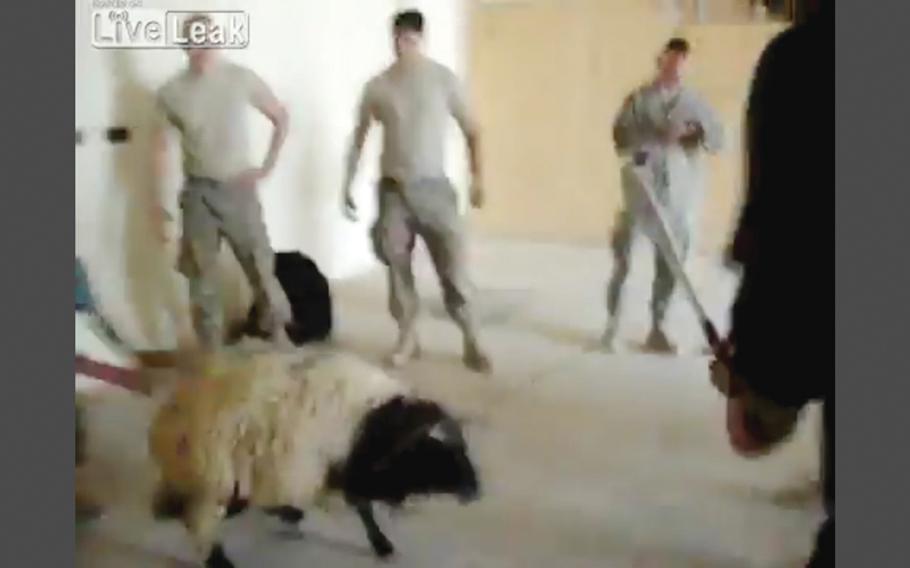 Less than a week after Corps officials were forced to deal with an embarrassing video of Marines urinating on the corpses of Taliban fighters, Army officials had to field questions about a new online video› This screenshot from LiveLeak appears to show a group of soldiers laughing and celebrating as a sheep is bludgeoned to death. (LiveLeak)

WASHINGTON &mdash; Marines mug for the camera as they splatter enemy corpses with urine. American troops film themselves insulting Iraqi children and mocking Islam. A group of what looks like U.S. soldiers laugh as a man bludgeons a sheep and in another video, a Marine calls a puppy cute before hurling it off a cliff.

The common denominator &mdash; beyond the disturbing behavior &mdash; is that all were caught on grainy cellphone video and posted on popular social media websites like Youtube and LiveLeak, sparking outrage as well as smirking &ldquo;I-told-you-so&rsquo;s&rdquo; from anti-American commenters on the sites.

At a time when the U.S. military is moving toward equipping individual soldiers with government-issued smartphones and similar devices, could the increasingly powerful technologies themselves be helping to create behavior problems, not to mention public-relations nightmares for the Pentagon?

A veteran of former, far less connected conflicts said it almost looks like the young troops in the videos are in a competition to be sensational.

&ldquo;Social media has become its own entity, with a feeling and need for immediacy,&rdquo; said Joe Davis, public affairs director for the Veterans of Foreign Wars&rsquo; Washington office. &ldquo;That could potentially endanger lives and endanger the mission in a forward-deployed area.&rdquo;

The videos show the aberrant behavior of only a few troops, he said, magnifying it out of proportion.

&ldquo;Would they have been doing it if no one had videotaped it?&rdquo; said Davis, a veteran of the first Gulf War and Somalia. &ldquo;I don&rsquo;t think anyone can answer that, but it&rsquo;s a good question.&rdquo;

The Marine Corps has announced an investigation of the urination video that will include a review of training procedures for use of cellphones and the like on the battlefield. The Army likewise will investigate the sheep-beating video.

But a Marine spokesman said there&rsquo;s no talk of cutting back on mobile communications technology in war zones, where its increasingly crucial to U.S. war efforts.

&ldquo;It isn&rsquo;t the technology that created this problem. It&rsquo;s the action that shouldn&rsquo;t have taken place that creates the problem,&rdquo; said Lt. Col. Stewart Upton at the Pentagon Friday.

Personal cellphones, cameras, iPads &mdash; all provide capabilities Marines otherwise would not have. The Taliban take full advantage of Afghanistan&rsquo;s increasingly robust cellular networks, and U.S. troops should have similar latitude. The key, he said, is training and discipline to make sure it&rsquo;s not used incorrectly.

&ldquo;You don&rsquo;t want to take these out of coalition hands while the [Taliban] are out there with five bars sending text and real-time data to each other,&rdquo; Upton said.

A psychologist who specializes in the effects of media said technology can be a scapegoat for those looking for easy explanations of bad behavior.

But technology is really tangential to the true problem of how to teach young troops to act correctly amid the stress and danger of combat, said Pamela Rutledge of the Media Psychology Research Center.

&ldquo;Here you have young kids who have been trained to kill people, which if you ask me is much more disrespectful than peeing on them,&rdquo; she said. &ldquo;But then they are supposed to have this level of respect for someone you just trained them to kill.&rdquo;

Rutledge said that hewing to the &ldquo;warrior code&rdquo; of respecting an adversary&rsquo;s humanity even as you potentially kill him is not an impossible goal, but it&rsquo;s not easy to inculcate in every young fighter, either.

With the conversation focused on the negatives of the spread of mobile communications technology, it&rsquo;s easy to lose track of the good points, she said. They include military operational uses, but a lot more as well, Rutledge said.

&ldquo;The human being is simply driven to connect,&rdquo; she said. &ldquo;In war, not only are you asking people to do an incredibly hard thing when they&rsquo;re deployed, but you&rsquo;re disconnecting them from their social supports.&rdquo;

Used correctly, social technology and social media can help fill some of that void, Rutledge said.

Davis agreed that the enhanced ability to connect is a good thing for most troops. But there have to be limits, he said.

&ldquo;Social media certainly has its place,&rdquo; he said. &ldquo;But it&rsquo;s not outside the wire.&rdquo;