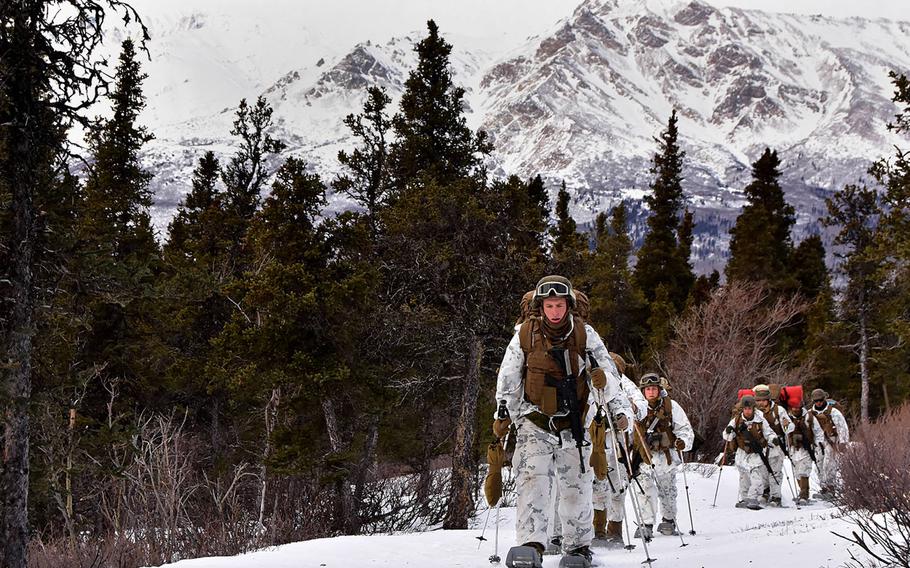 A group of Marines snowshoe along Hippie Trail on their way to the biathlon range Feb. 21, 2018, at the Northern Warfare Training Center's Black Rapids Training Site. (John Pennell/U.S. Army)

A group of Marines snowshoe along Hippie Trail on their way to the biathlon range Feb. 21, 2018, at the Northern Warfare Training Center's Black Rapids Training Site. (John Pennell/U.S. Army) 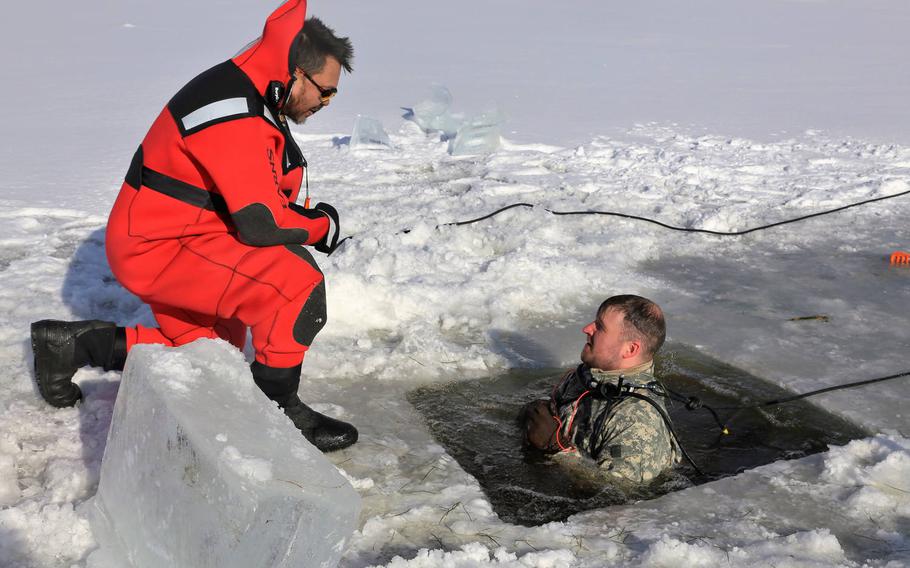 A flat tire sidelined Maj. Chad Peltier’s vehicle in minus 22-degree weather recently as he was on his way to pick up his wife, but he knew exactly how to handle the situation.

It’s no harrowing Arctic survival tale, but Peltier, commandant of the Fairbanks-based Northern Warfare Training Center, said in a phone interview that “surviving” the cold isn’t the point. “Thriving in that environment is what we’re really aiming for.”

The polar vortex has brought record-shattering Arctic temperatures to the Midwest, Great Lakes and Mid-Atlantic this week; meanwhile, snowy conditions are impacting U.S. military bases in generally temperate parts of Europe and Asia.

In light of that, Peltier and other cold-weather operations veterans had a few “pro tips” for staying warm and safe in the biting cold.

“A lot of it’s common sense, but sometimes it’s not so common,” said Bill Hamilton, a Marine Corps veteran who spent more than five years as an instructor at the service’s Mountain Warfare Training Center in Bridgeport, Calif. Now a contractor and Army reservist, he teaches a cold-weather operations course at Fort McCoy, Wis.

All of the experts recommended dressing in clean, loose-fitting layers that allow for good circulation and movement. The Army, for example, has a seven-layer cold-weather clothing system with silk-weight long underwear as its base, another midweight underlayer, a fleece jacket and successive outer layers of wind and waterproof jackets.

Similar gear can be found on the civilian side, including lightweight, moisture-wicking athletic clothing for the base layer, said Joe Ernst, an Army veteran who’s now a cold-weather trainer at Fort McCoy. He recommended merino wool for its moisture-wicking and insulating properties.

It’s good to cover as much skin as possible, but not necessary to put on every piece of “snivel gear,” Peltier said, using military slang for cold-weather equipment.

“We want our students to be comfortably cool,” said Peltier, who’s seen soldiers overheat in minus 35-degree weather and quickly become casualties of the cold, which can cause frostbite in minutes on clammy, sweaty skin. “To overdress in the cold is equally as hazardous as to underdress.”

Another big key is managing exposure, he said. It’s not always possible to avoid the frosty weather, but it’s critical to take breaks to warm up.

That can mean a heated shelter — like an idling car — or exercise, even if it seems painful, as when instructors send students sprinting up hills in snowshoes, Peltier said.

No amount of training can prevent someone from getting cold, and eventually, he said, “the cold is going to eat through any amount of layers you have.”

Some equipment also stops working at about minus 25, said Staff Sgt. Michael Berna, a Colorado native who has taught at NWTC for about two years. Car batteries can die and battery-powered electronics like cellphones are not dependable.

Cars should be outfitted with blankets, drinking water and Meals, Ready-To-Eat in case of a roadside emergency, the experts said.

Such winter preparation was a key lesson for Staff Sgt. Timothy Bridge, who grew up in South Texas and had avoided an Alaska assignment for much of his 17-year Army career. He moved to the 49th state just before winter broke a few years ago and now teaches at NWTC’s Black Rapids Training Site south of Fort Greely.

“Growing up, my idea of cold was about 50 (degrees),” said Bridge, who’s since adjusted to the weather — a balmy 19 degrees Wednesday afternoon. “It’s warm for us right now.”

He now keeps his gas tank full in case conditions leave him stuck on the road and allows more time for his vehicle to warm up in the bitter Alaskan winters.

A full tank also helps keep gas lines from freezing, said Hamilton, who was enduring temperatures of minus 25 at Fort McCoy on Wednesday — minus 45 with wind chill. At such lows, metal becomes brittle, plastic starts snapping and rubber hoses don’t bend, “they just crack,” he said.

Still, soldiers in the cold-weather course were training and planned to stay overnight in primitive outdoor shelters on Thursday, he said.

“Most units, believe it or not, are afraid to get out and train in this weather,” Hamilton said.

After decades of desert deployments, the military is trying to change that mindset and has expanded cold-weather training in recent years.

But several experts cautioned that extreme cold weather is often unforgiving for those who are unprepared.

“You don’t get a second chance at making mistakes,” Peltier said.