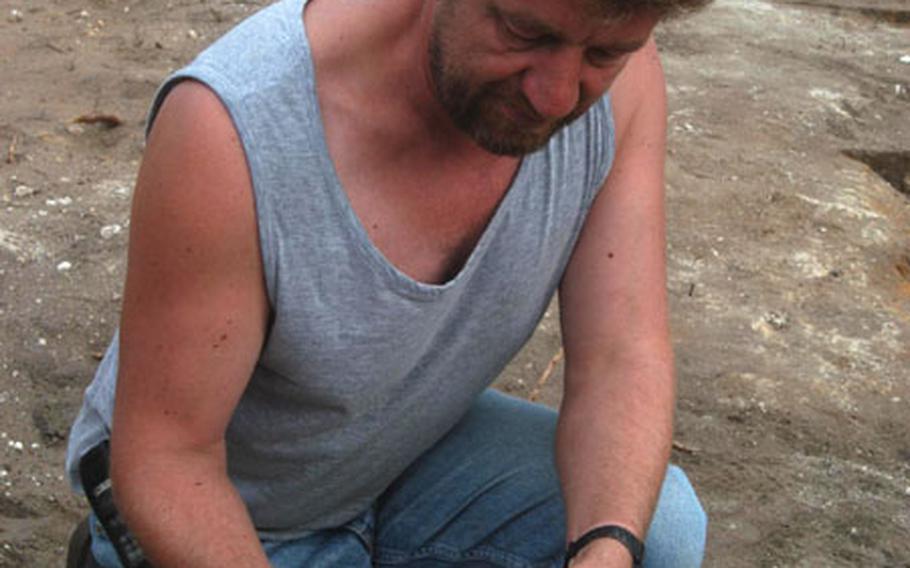 Andrew Tester, an archaeologist with the Suffolk County Council in England, examines a piece of Roman era pottery found during the excavation of a site at RAF Mildenhall. The construction of a baseball field has yielded several items from the Iron Age and Roman era of Great Britain. (Ron Jensen / S&S)

RAF MILDENHALL, England &#8212; Long before an air base occupied the land on which RAF Mildenhall now stands, Iron Age cattle grazed there and Roman era farmers grew grain in the sandy soil.

Archaeologists digging where the base plans to build a new baseball field have found evidence of these earlier occupations, including remnants of a large Roman building.

The Iron Age in Great Britain dates back to 600 B.C. The Roman occupation began here about 100 A.D. and lasted 300 years.

Andrew Tester, senior project officer, said some bits of Anglo-Saxon life also have been found. That period began after the Romans left the island.

Referring to a wealth of artifacts found at nearby RAF Lakenheath, Tester observed that &#8220;archaeology is very lucky to have these American bases here.&#8221;

Tester explained that the bases are less destructive to archaeological sites than agriculture. Many artifacts are destroyed as farmers plow their fields, he said.

And, he added, when bases are built, the project includes an archaeological study of the site ahead of the construction &#8212; a precaution required throughout the county.

Keith Sturmey, project manager for Defence Estates, which manages property for the Ministry of Defence, said his organization is spending 100,000 British pounds (about $160,000) to fund this archaeological effort, just as it does every time the Air Force wants to build.

The archaeologists have been poking and probing, scraping and sweeping at the site since the middle of July. The area is impressive in its size, Tester said. It covers most of an acre; most sites are much smaller.

Tester has had up to 15 people working on the site in one day to cover the numerous trenches that have been dug and must be gingerly worked.

Tester said he expected this area to yield pieces of interest to archaeologists. When the East Anglian water department did work in 1995 just outside the perimeter fence nearby, the county archaeologists found several worthwhile artifacts.

So Tester was happy to hear about the baseball field project.

The dig has unearthed about what Tester expected, although the presence of a Roman building more than 30 feet wide was a surprise.

A couple bodies have yet to be excavated. One is in a wooden casket, meaning it is certainly Roman.

The archaeologists will wrap up their work later this month so work can continue on the ball field.

The artifacts will be examined by experts. Ultimately, they will help push forward a bit the understanding of life in eastern England centuries ago, long before there was an RAF Mildenhall.