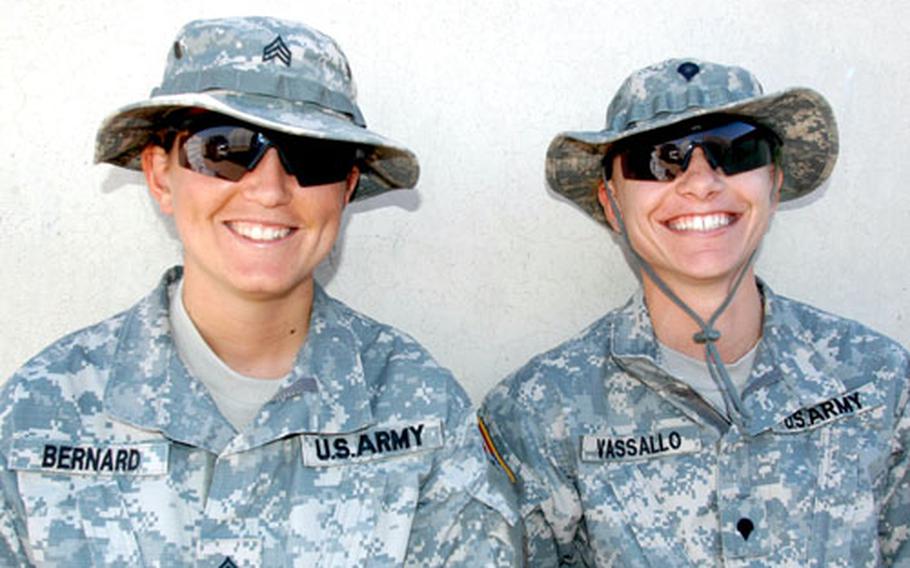 Sgt. Brienne Bernard, left, and Spc. Desiree Vassallo, Arabic linguists with the 2nd Brigade Combat Team, 1st Infantry Division, based in Schweinfurt, Germany, are looking forward to their first deployment in Iraq, where they’ll be able to use Arabic instead of their motorpool talents. (Jennifer Svan / S&S)

CAMP BUEHRING, Kuwait &#8212; As they finish up their final training before heading north to fight a war, the Arabic linguists with 2nd Brigade Combat Team, 1st Infantry Division out of Schweinfurt, Germany, are brushing up on their skills.

It&#8217;s an easier task for some than others. Two of the linguists are natives of the Middle East, one from Lebanon and one from Iraq.

&#8220;I feel like I&#8217;m coming home,&#8221; said the specialist from Iraq who goes by the name Santiago. His unit knows his real name but to the outside world he wants to remain anonymous since he still has relatives living in Iraq.

Santiago left Iraq and immigrated to the States when he was 14. He&#8217;s now 28 and married to an American. His own U.S. citizenship is still in limbo but not his patriotism, he said. He hopes that his presence in the brigade will give fellow soldiers &#8220;a different perspective on this war,&#8221; he said. &#8220;There are also Middle Eastern people that believe in the cause of this war to help the Iraqis.&#8221;

Santiago joined the Army almost a year ago as part of an Army program to boost Arabic linguists by recruiting people from the Middle East.

As a native Iraqi, Santiago not only knows some local dialect, but he&#8217;s familiar with cultural mores. &#8220;I can walk into a group of Arabs and I can find out who will tell me things, who can get things done,&#8221; he said.

He can also steer U.S. military leaders away from cultural taboos. His advice might be:

Don&#8217;t ask an Iraqi about his wife and kids. &#8220;Just ask about his family. If you ask an Arab guy about his wife, he&#8217;ll think you&#8217;re overstepping your boundary.&#8221;If you&#8217;re eating at someone&#8217;s house, always remark kindly on the meal. &#8220;We always have to compliment the food, even if we don&#8217;t like it.&#8221;Iraqis like to talk about family before taking care of business. It tends to be the other way around in American society, he said he&#8217;s observed.Two of the American Arabic linguists with the brigade said Santiago is helping them with local dialect.

Vassallo and Bernard studied the language for 18 months at the Defense Language Institute in Monterey, Calif.