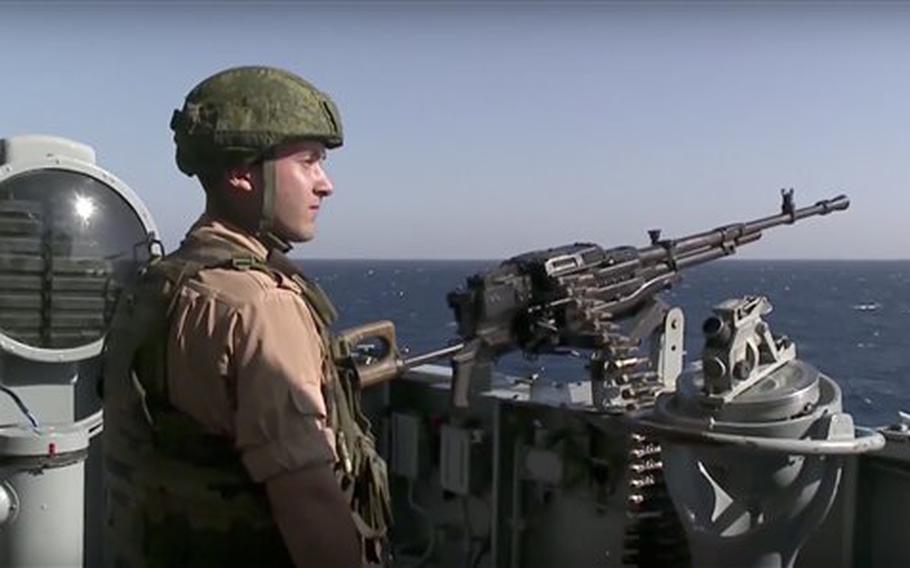 In this photo made from the footage taken from Russian Defense Ministry official web site on Friday, Nov. 27, 2015, a Russian seaman stands next to a machine gun on the Russian missile cruiser Moskva, near the shore of Syria’s province of Latakia, Syria. The Russian military has ordered the ship equipped with an array of air defense missile systems to help protect Russian warplanes flying combat missions in Syria after the downing of a Russian military jet by Turkey. (Russian Defense Ministry Press Service pool photo)

AMMAN, Jordan — Turkey’s downing of a Russian jet along the Syrian-Turkish border has alarmed America’s Arab allies, who fear another such incident could lead to a “very hot response” by Moscow that could sabotage the fight against the Islamic State.

“The situation along the border (between Syria and Turkey) is critical now,” said Hisham Jabar, a former Lebanese general who is now a military analyst.

The Jordanians had been reaching out to Russia in hopes of encouraging Moscow to zero in on Islamic State fighters in Syria rather than Arab and Western-backed insurgents.

Jordan, which allows U.S. jets to operate from its soil, has set up a joint coordination center with Russia in the capital of Amman to share information on military actions in Syria.

Such efforts have now been complicated by the fallout from the Turkish attack on the Russian jet. Two Russians, the plane’s pilot and a member of the rescue team, were killed in the incident.

Turkish authorities claim the jet flew across a tip of Turkish territory jutting south into northwestern Syria, something Russia denies. They said the F-16 flight leader warned the Russian crew 10 times to turn away before engaging.

“We anticipate a tense Syrian border with Turkey,” a senior Jordanian official familiar with discussions Tuesday — the day of the attack — between Jordan’s King Abdullah and Russian President Vladimir Putin in the Russian resort of Sochi. “The Russians will not let this one go unanswered.”

He said he was certain Turkey, a NATO member, would face a “very hot response” if another Russian plane were threatened. He spoke on condition of anonymity because he didn’t want to speak publicly for other countries.

The official described the talks, which were overshadowed by the shootdown, as “very positive.”

Jordan, which hosts more than a million refugees from the nearly five-year war in neighboring Syria, is one of the few Arab countries still bombing Islamic State targets in that country. The air force has been regularly pounding the militants since February, when they burned alive a captured Jordanian pilot. In the third week of November, it carried out 70 strikes, the military said.

But Jordan, a traditional U.S. ally in the Middle East and one of the few regional countries that has escaped turmoil in recent years, also has been forging stronger ties with Moscow since the start of the Syrian civil war. King Abdullah, whose country is squeezed between hotspots Iraq, Syria, Israel and the Palestinian territories, has said that any political solution to the conflict in Syria required a “strong role” by Russia.

In October, the two countries concluded an accord ensuring that Russian airstrikes in southern Syria do not target Western-backed moderate rebels who have been fighting against Islamic State militants. The United States and its coalition allies have been saying that until recently Russian airstrikes, which began at the end of September, have focused mainly on the moderate rebels rather than on Islamic State jihadists.

Analysts in the region have expressed concern that growing tensions between Turkey and Russia could undermine a U.S.-led attempt to open a peace process in January by bringing Syria’s government and rebel groups to the negotiating table for the first time, while excluding Islamic State and other extremists.

“Russia’s intervention in Syria was a major blow to (Turkish President Recep Tayyip) Erdogan, who wanted to create a no-fly buffer zone in northern Syria, which Turkey would protect with its armed forces,” Jabar said. “But now the Russians have excluded the Turks from Syria.”

“Russia has in effect created a no-fly zone over Syria,” Jabar said.

In order to prevent the situation from spiraling out of control, Turkey and Russia need to urgently establish a protocol like the one between Jordan and Russia about coordinating operations over Syria, said Qasem al-Hamad, a retired Jordanian general.

“Sometimes an attacking plane needs to make a wider turn to better target the enemy,” al-Hamad said. “The Jordanians, for instance, would never engage a Russian jet that was just skirting the edges of our airspace, like the Turks did.”

Elias Hanna, a retired Lebanese general and university professor, said that the tit-for-tat could take the war in a new and uncertain direction.

“Neither Turkey nor Russia will back down now because of the bigger geopolitical picture,” Hanna said in a telephone interview from Beirut. But he expressed hope that the United States and its coalition allies would work to defuse the situation and ensure “that escalation won’t go any further.”

That may already be happening.

After a meeting Thursday between Putin and French President Francois Holland — who is seeking to unite major powers in a broad coalition to defeat the Islamic State following the Nov. 13 Paris terror attacks claimed by the group — Moscow and Paris agreed to share intelligence and cooperate more closely in selecting Islamic State targets.

After that meeting, Putin said Russia was ready to broadly coordinate its military actions with the U.S.-led coalition. But there was no indication this would include Turkey, which Putin has publicly accused of helping Islamic State and other terrorist groups in Syria and Iraq.