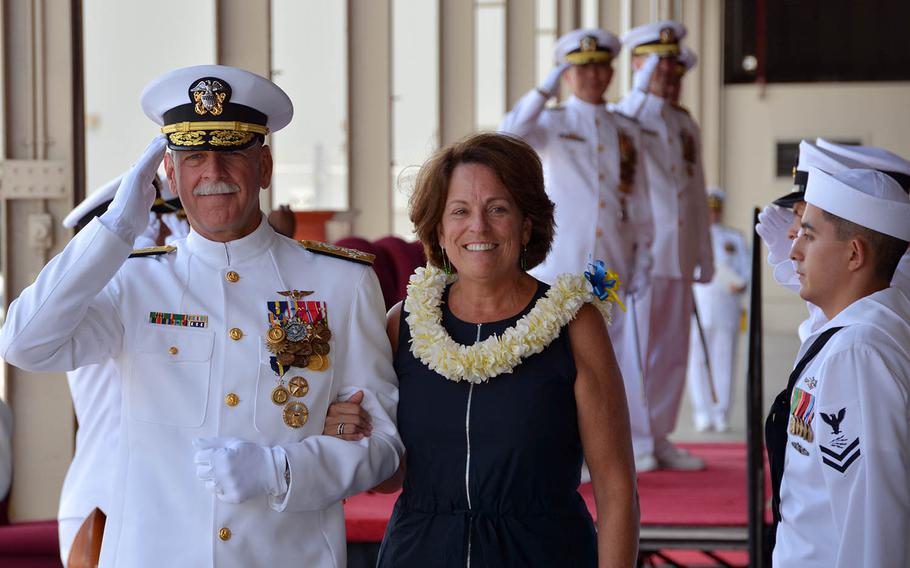 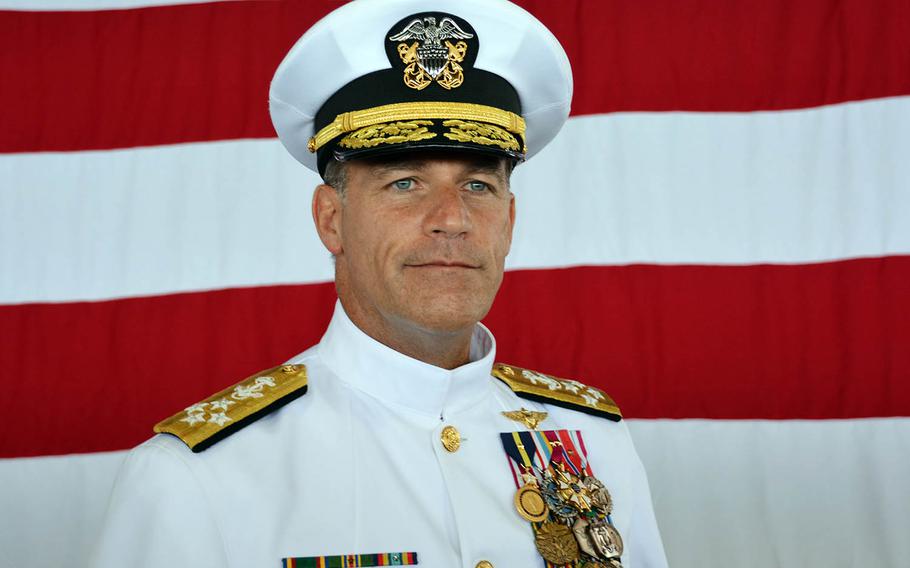 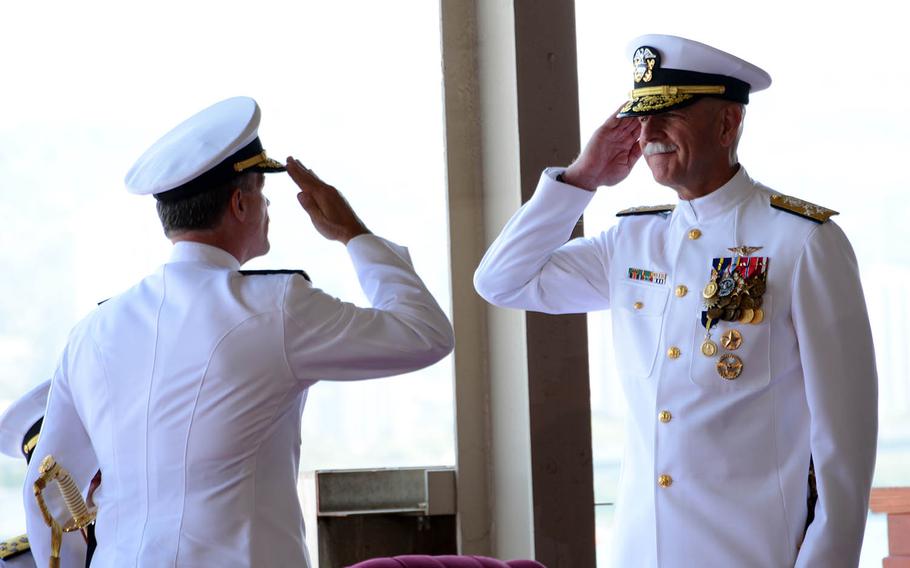 Aquilino most recently headed the Navy’s Middle Eastern forces as commander of both 5th Fleet and Naval Forces Central Command.

Swift announced in September that he would retire after learning he would not be nominated to lead U.S. Pacific Command in the wake of two deadly collisions last summer involving the USS Fitzgerald and USS John S. McCain.

Pacific Fleet commanders have typically been tapped to lead PACOM.

If Swift feels disappointment over being passed over for that promotion, he did not show it during a ceremony that primarily served as a farewell for his July 1 retirement.

“This is my 14th change of command, and it seems like a good point to transition to something new,” he told the audience.

“To finish my career here in the Pacific Fleet — the only fleet I have ever sailed in — headquartered in the city I was born, in a harbor of my father’s first command, doing what I love, is something dreams are made of.”

Adm. Harry Harris, commander of U.S. Pacific Command, praised initiatives by Swift to increase Pacific Fleet’s presence in the region, particularly with 3rd Fleet Forward, which gave the San Diego-based 3rd Fleet direct operational control of its ships as they crossed east over the international dateline.

But Swift said that as he prepares to leave the Navy “it is not lost on me that there is still much work to be done.”

Among the two most significant challenges facing the Pacific Fleet today, he said, is the aftermath of the separate collisions of the destroyers Fitzgerald and McCain, which left 17 sailors dead and some officers facing criminal charges.

“For all of us wearing the uniform, the greatest burden to service are the memories of those shipmates we have lost along the way,” Swift said. “As a young naval aviator, I stopped counting at 13 the memorial services that I attended. It seemed like a good point to do so. Instead of numbers, I chose to focus on both those we had lost and those they had left behind.”

In remembering those who died on the Fitzgerald and McCain, he said, “we must recommit ourselves to recognizing that while individuals are responsible for their loss and must be held accountable, the readiness environment that created the conditions for those individual failures and the death of the Fitzgerald seven and McCain 10, must be improved.”

He said he was “convinced” that the Readiness Reform and Oversight Council, which the Navy stood up on Jan. 30, would prevent such collisions from happening again.

The council is tasked with ensuring enactment of reforms and recommendations from two separate post-collision reviews by the Navy regarding problems with manning, training, education and culture that contributed to the collisions.

The fleet’s other foremost challenge is China’s increasingly assertive navy and militarization of the South China Sea — although Swift did not mention the country by name.

China’s vision for the Pacific, “with its inherent leveraging of national power for national goals at the expense of regional stability, has such significant global implications we should all be concerned,” Swift said.

“The leading edge of the application of this vision in the South China Sea has begun to spread to the Indian Ocean, a creeping genesis of a new rules-based order formed on the basis of military power, not international consensus.”

Aquilino, who was Swift’s operations director when he took command of Pacific Fleet in 2015, echoed the concerns of his former boss.

The sailors of Pacific Fleet live in stormy times, Swift said, and when “a storm catches up with you at sea, it is a daunting experience” with “nowhere to hide, nowhere to run.”

He offered up the counsel his career-Navy father once gave him: “Bad weather makes good sailors.”