Applying for Consecutive Overseas Tour may be worth a shot, officials say 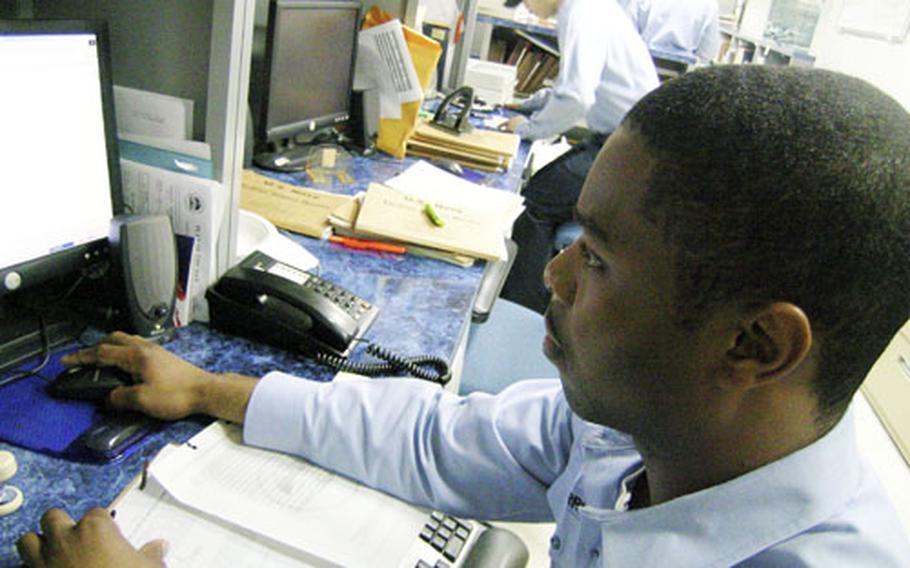 Petty Officer 1st Class Ansel Harris, 27, was working in Okinawa before he was approved for a COT to Japan. U.S. 7th Fleet says the majority of qualified sailors who want to stay in the area can, if they fill the right billet. (Allison Batdorff / S&S)

YOKOSUKA NAVAL BASE, Japan &#8212; Petty Officer 2nd Class David Seeley, 23, married a Japanese woman but said she wasn&#8217;t his only reason for wanting to stay in Japan.

A COT lets qualified sailors serve multiple tours in Diego Garcia, South Korea, Singapore, Japan and Guam, either by staying in the same job or being reassigned within the theater.

Most qualified people who want COTs get them, said 7th Fleet Lt. Hope Hair. But most sailors don&#8217;t know that, she said.

Hair, as an administrative officer, approves and denies requests to stay in the 7th Fleet area. Many come from sailors who like the culture, security, safety and the financial perk of the overseas cost-of-living-allowance, she said. About half the applicants have families; half are single sailors.

However, she said, plenty of others don&#8217;t apply due to COT misconceptions.

COT screening considers performance and behavior, plus weighs the number of dependents (applicants with more than three primary dependents or parents or in-laws living with them may see their applications red-flagged) and the number of years already served with the forward-deployed naval forces. Six years is a red flag and a decade is &#8220;excessive&#8221; as it limits professional Navy experience, according to the COTS instruction.

A renewed enforcement of COT rules in 2004 aimed at cutting down the number of homesteaders, or people who&#8217;ve served more than one tour in an overseas location. The renewed enforcement was aimed especially at sailors taxing base infrastructure by raising large families overseas, and at instituting a better check on which sailors would stay as the Navy&#8217;s &#8220;ambassadors.&#8221;

&#8220;Good behavior is of extreme importance in the 7th Fleet area of responsibility,&#8221; according to a written statement from Capt. David Newland, 7th Fleet chief of staff. &#8220;Our desire is to retain only the most respectful and responsible sailors.&#8221;

Petty Officer 1st Class Ansel Harris, 27, said he worked on Okinawa before applying for COT to mainland Japan. His wife and daughters, originally from Patterson, N.J., were learning Japanese.

Total requests: 1,321 (That includes 115 requests, or 9 percent, that were canceled, withdrawn or for another program)