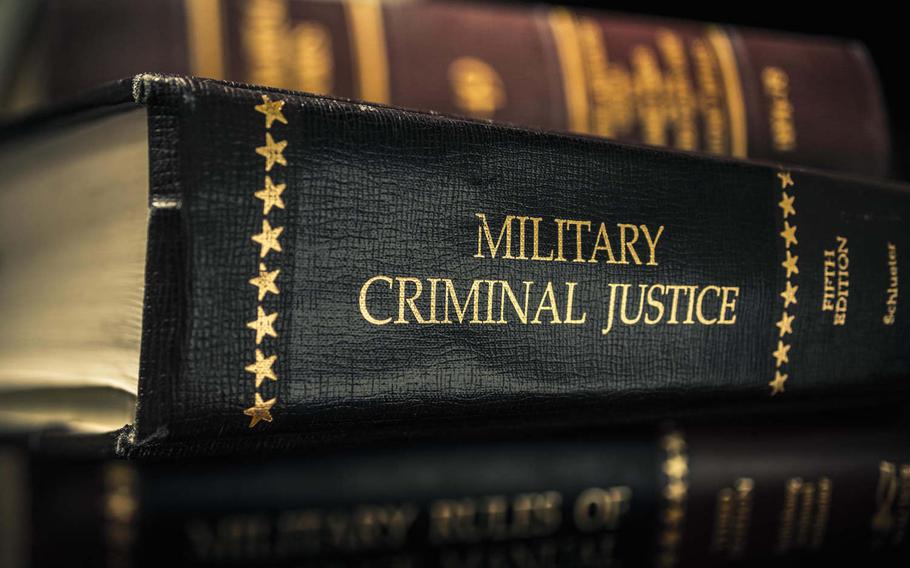 The U.S. Court of Appeals for the Armed Forces set aside the 2014 findings and sentence against U.S. Air Force Lt. Col. Michael Briggs. (Samuel Morse/Courtesy of the U.S. Air Force)

The U.S. Court of Appeals for the Armed Forces last month set aside the court-martial findings and sentence against Lt. Col. Michael Briggs, who had been convicted of raping an airman when the two were on a temporary duty assignment at Mountain Air Force Base in 2005. She reported it in 2013.

At the time of the Briggs’ trial, military court precedent held that there was no time limit for bringing rape charges. The Uniform Code of Military Justice contains a baseline five-year statute of limitations for most offenses, but Congress amended it in 1986 to add exceptions, including for “any offense punishable by death.”

The court in two previous decisions ruled that rape had no statute of limitations, since for many years, the offense carried a maximum punishment of death under the UCMJ. The court held to that interpretation despite a 1977 Supreme Court decision that ruled death is an unconstitutional punishment for the rape of an adult.

But last year, in a case against Air Force Lt. Col. Edzel Mangahas that never went to trial, the appeals court reversed 20 years of precedent. In October 2015, Mangahas, then a lieutenant colonel, had been charged with raping a fellow cadet in her dorm room at the Coast Guard Academy in New London, Conn., 18 years earlier.

The other cadet had made the allegation at the time, but did not participate in an investigation. In January 2014, she made a new report to the Department of Veterans Affairs.

Trial proceedings were put on hold pending an appellate review. Mangahas raised several objections, including that the charge was brought after the statute of limitations had run out.

In its decision, the court reinterpreted the statute of limitations for rape of an adult. Because “there is, in fact, no set of circumstances under which anyone could constitutionally be punished by death for the rape of an adult woman,” the court said, the crime should carry the same five-year limit as other military crimes not punishable by death.

The timing was fortuitous for Briggs, whose appeal before the Supreme Court on a separate issue was still pending at the time.

Briggs’ attorneys asked the Supreme Court to send the case back to the court of appeals in light of Mangahas, said Stephen Vladeck, a law professor at the University of Texas School of Law who represented Briggs in the appeals process.

Two issues were raised in Briggs that weren’t addressed in Mangahas, Vladeck said, including whether a 2006 amendment by Congress doing away with a statute of limitations for rape of an adult was retroactive.

In dismissing the findings against Briggs, the appeals court ruled the amendment did not apply prior to 2006.

The Mangahas decision has also led to another rape conviction dismissal in a lower military court of appeals. That case involved charges that Richard Collins, an Air Force master sergeant, had raped a young airman, a student of his, while he was a course instructor at Sheppard Air Force Base, Texas, in 2000.

Collins pleaded not guilty, but at a court martial at Eglin Air Force Base, Fla., in 2017, he was convicted and sentenced to 198 months in jail and a dishonorable discharge.

The U.S. Air Force Court of Criminal Appeals dismissed the findings against Collins last summer, based on the Mangahas decision.

“The same reasoning applies to an alleged rape that occurred in August 2000. We are compelled to follow our superior court’s precedent and take similar action,” the decision says in part.

The case is now expected to go to the armed forces court of appeals.

Victims’ rights advocates say the Mangahas decision could discourage rape reporting and make it harder for servicemembers to successfully press charges in older cases, such as that of Sen. Martha McSally. An Arizona Republican and the first female U.S. fighter pilot to fly in combat, McSally told a Senate Armed Services subcommittee on Wednesday that she was raped years ago by a superior officer while serving in the Air Force.

McSally, 52, said she did not report being raped because she did not trust the system and felt ashamed and confused. The Air Force quickly apologized to McSally and said it was committed to eliminating “this reprehensible behavior and breach of trust in our ranks.”

In the Briggs case, the victim informed her supervisor at the time of the alleged offense, but the supervisor suggested she and Briggs “work things out” without involving law enforcement. The woman also confided in a couple of friends. No official report was filed.

In 2013, the woman, by then a staff sergeant, decided to report her rape again after she attended an Air Force sexual assault briefing. Briggs, who’d pleaded not guilty, was convicted in part by his admission during a recorded phone call. “I’m sorry I raped you and will always be sorry that I raped you,” he said, according to court documents.

Spangdahlem officials said they could not comment on what will happen to Briggs; whether, for instance he’ll be reinstated or permitted to apply for voluntary separation. The government has 90 days from the date of the appeals’ court decision to petition the Supreme Court to review the lower court’s findings, said Capt. Andrea Valencia, a Spangdahlem base spokeswoman.

“Until that decision is made, the appellate process remains,” she said.

The Mangahas decision also derailed the Army’s case against retired general James J. Grazioplene, who was charged with raping a minor on repeated occasions while on active duty from 1983 to 1989.

The Army was planning to court-martial Grazioplene, 69, in the spring of 2018 but a military judge dismissed the charges in March of that year, about a month after the ruling on Mangahas was issued.

Though Mangahas dealt with an adult rape case, U.S. Army Circuit Judge Col. Daniel Brookhart noted in his ruling on Grazioplene that at the time of the alleged offenses, there was no UCMJ article criminalizing the rape of a child and the age of the victim was not an element of the offense, Army Times reported.

But while the Mangahas decision may tie the military’s hands in prosecuting old rape cases, civilian courts may have freer rein, depending on state laws. Grazioplene is to be tried in April on rape and incest charges in Virginia, which has no statute of limitations on rape charges. Some of the accusations against Grazioplene were alleged to have taken place while Grazioplene was stationed in Virginia.

Lory Manning, a retired Navy captain and the director of government operations at the Service Women’s Action Network, or SWAN, said the Mangahas decision should not affect recent or future cases.

But it was “upsetting” to hear that some military court rape convictions have been overturned based on a statute of limitations, Manning said in an interview Thursday.

“Particularly since as we saw yesterday with Sen. McSally, people didn’t trust the system back in those days, even people who are fairly senior or officers,” she said. “Now there are changes that make it a little bit more likely that you’ll get some attention, (but) you can’t report those and feel like you’ll get justice.”

It’s unclear whether Congress could ensure the 2006 amendment is made retroactive, Manning said, but she thinks it should be.

“An assault is an assault, whether it happened 20 years ago or yesterday and they ought to all be chargeable,” she said.