Apologizing for Iraqi forces all in a day’s work for U.S. Marines 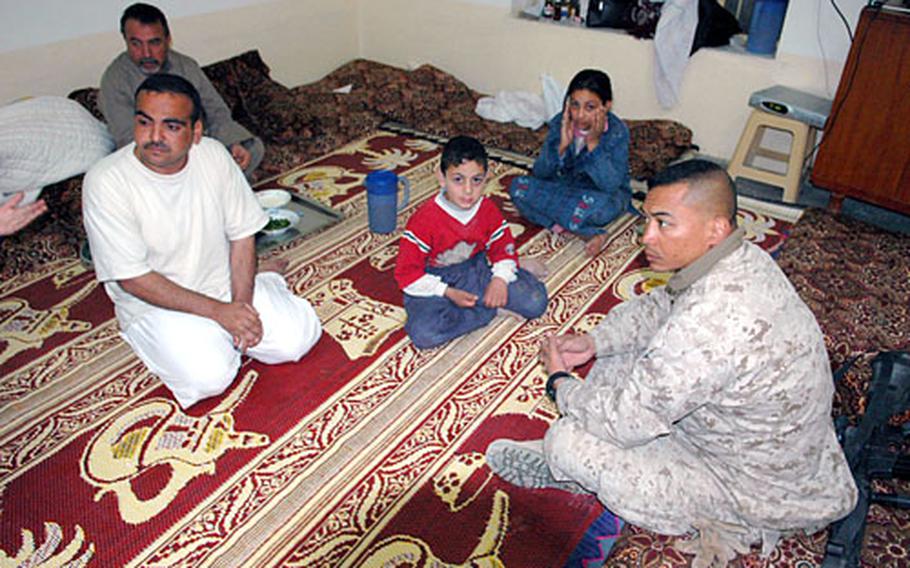 Lt. Col. Robert Glover visits with and apologizes to an Iraqi store worker Wednesday who was beaten by several Iraqi soldiers on joint patrol with Marines last week. Glover says apologizing for Iraqi forces takes up a significant portion of his time. (Andrew Tilghman / S&S)

HUSAYBAH, Iraq &#8212; Shortly after nightfall, Khalid Kadem was relaxing with his mother and sister when he heard a thud in the courtyard outside his home.

A moment later, a team of Iraqi army soldiers stormed into his living room, assaulted him and accused him of being a terrorist.

Meanwhile, outside the home, a squad of U.S. Marines was puzzled by the unexpected aggressiveness of the Iraqi army unit they were with on a joint patrol.

&#8220;We were trying to look friendly, not be aggressive, giving out soccer balls and stuff. We were just out trying to meet people and calm this place down,&#8221; he said.

Since the Marines swept through last week and took control of this dusty border town and former insurgent stronghold, they&#8217;ve sent out daily foot patrols designed to cultivate goodwill among local residents.

But the incident involving the Iraqi army&#8217;s hectoring raid highlights the challenges U.S. troops face when working alongside local forces who often have limited training and a vastly different understanding of how to exercise civil authority.

Across Iraq, U.S. troops are making every effort to work with Iraqi forces. The joint efforts help put an Iraqi face on many politically sensitive operations. They also help ready the local forces to take control of the country and pave the way for the U.S. to reduce the number of deployed troops deployed here.

But taking Iraqi soldiers out into the field is not always helpful, troops say.

&#8220;Every time something like this happens, it just creates another insurgent,&#8221; said Lt. Col. Robert Glover, head of the civil affairs unit here.

Most Iraqi army soldiers here are Shiites from eastern and southern Iraq, while this western part of the Euphrates River valley is predominantly Sunni.

Complaints of Iraqi army misconduct are common in the mostly Sunni areas of Anbar province, one of the most violent and volatile areas of the country.

After hearing about the assault, Glover and several other Marines from the civil affairs unit returned to Kadem&#8217;s home to smooth over any hard feelings.

Kadem received the Marines warmly, welcoming them into his living room and offering them food.

The man and his sister and mother all said they welcomed the Marines into their city, yet they criticized the local forces.

Several Marines sat in the family&#8217;s living room for about 30 minutes and talked about the situation in their city since the Marine&#8217;s invasion.

Glover said apologizing for the Iraqi army takes up a significant portion of his time as a civil affairs officer.