Apaches put through their paces at Rodriguez Range 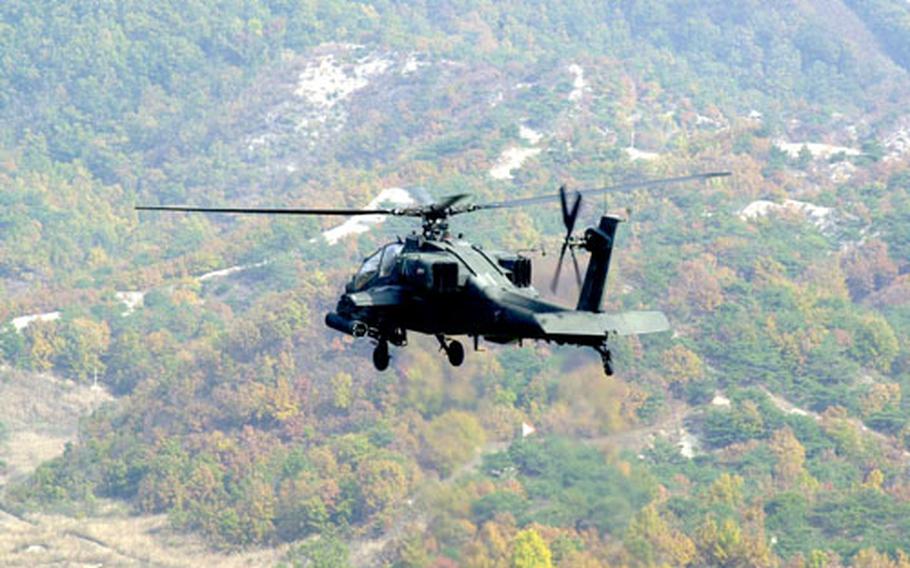 RODRIGUEZ RANGE, South Korea &#8212; The autumn colors and high ridgelines of South Korea&#8217;s northern frontier are a far cry from the combat landscapes that most Apache pilots such as Chief Warrant Officer Pat Taylor have faced in recent years.

The mountains make the flying more challenging than much of Iraq&#8217;s flat desert.

&#8220;Here you&#8217;ve also got the high electrical lines everywhere, which makes things different,&#8221; said Taylor, a two-time veteran of Iraq duty, with 1,300 hours combined in both front and rear seats of the Apache.

Taylor was among 25 crews and 18 helicopters from the 2nd Combat Aviation Brigade&#8217;s 1st Battalion, 2nd Aviation Regiment, that went through annual qualification gunnery this week at Rodriguez Range. Several other elements of the brigade also are scheduled to participate in training during the next few weeks.

In their configuration Tuesday, the Apaches were capable of firing eight Hellfire missiles, 38 smaller rockets and 1,200 30 mm rounds; however, they fired only the 30 mm rounds and training rockets on Tuesday.

The Apache crews practiced running, diving and hovering attacks Tuesday morning and afternoon. They fired at both moving and stationary targets, some as large as Armored Personnel Carriers.

&#8220;The great thing about Korea is that you have the opportunity to practice any technique or tactic,&#8221; said Apache pilot Capt. Dick Dunning, an assistant brigade operations officer who also is a veteran of Iraq duty.

Although South Korea&#8217;s mission and geography vary greatly from today&#8217;s battlefields, the Army has taken several lessons learned from those desert conflicts and applied them elsewhere, Dunning said.

This year, Apaches have trained at a South Korean range and at Rodriguez Range in concert with ground support.

Infantry can laser-sight a target, then radio coordinates to an Apache waiting behind a ridgeline. The target can be destroyed without it ever seeing the helicopter, Dunning said.

The Apache crews also were scheduled to qualify on night operations this week, when a pilot typically will navigate through the valleys as the co-pilot uses radar and thermal imaging to fire at targets.