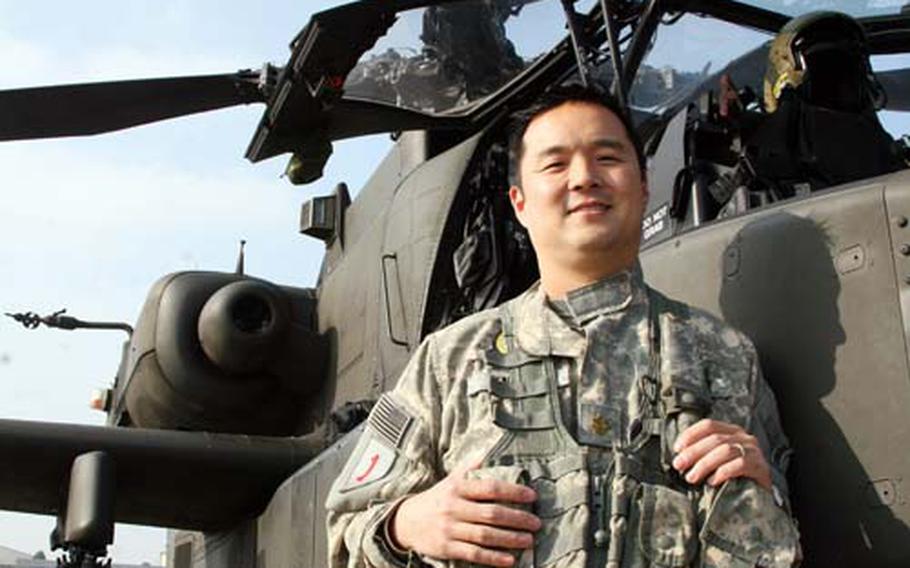 U.S. Army Maj. Lee Fennema became the first U.S. pilot to fly the U.K. Apache helicopter in combat in late 2007. He will also take the No. 2 slot when he deploys to Afghanistan with the British army next month. (Charlie Reed / S&S)

U.S. Army Maj. Lee Fennema became the first U.S. pilot to fly the U.K. Apache helicopter in combat in late 2007. He will also take the No. 2 slot when he deploys to Afghanistan with the British army next month. (Charlie Reed / S&S) 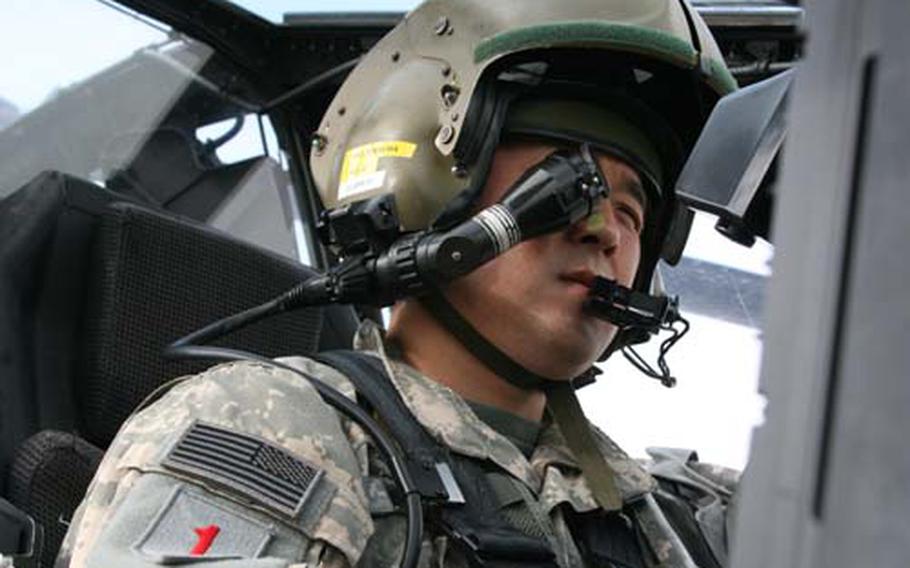 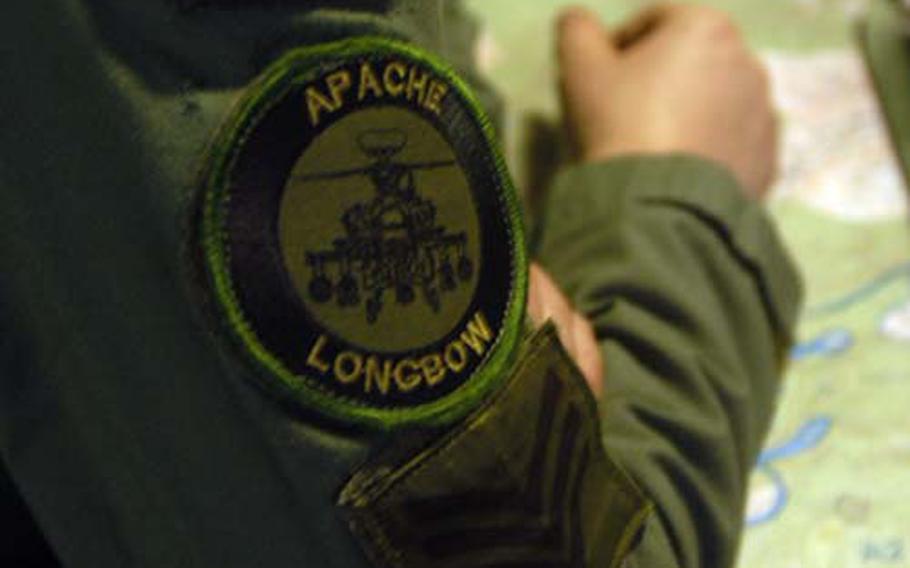 WATTISHAM AIRFIELD, England &#8212; U.S. Army Maj. Lee Fennema will go down in military history not only as the first American to fly a U.K. Apache in combat, but also the second.

The 37-year-old exchange pilot deployed to Afghanistan with the British Army Air Corps last year and goes again in May before wrapping up his three-year assignment in England this summer.

He crossed paths with Prince Harry during his first four-month tour and later was presented with a service medal by Prince Charles.

"It&#8217;s been rewarding. I&#8217;ve had some great opportunities," said Fennema, a Seattle native and one of 38 U.S. soldiers serving with British units in England, Scotland and Wales.

There are about 440 U.S. troops stationed with at least 18 different foreign militaries as part of the Military Personnel Exchange Program. The one-for-one individual swaps mean the same number of foreign troops are also serving with U.S. units at home and overseas. The partnerships date to the era shortly after World War II when the U.S. began reaching out to other countries&#8217; forces to strengthen international military relations, according to the Pentagon.

Fennema will arrive at Camp Bastion &#8212; Britain&#8217;s operations headquarters in hotly contested Helmand province &#8212; as roughly 30,000 more U.S. troops enter the country in a renewed fight against the Taliban. The base is being expanded to accommodate the surge, much of which will be concentrated in the south, NATO and U.S. commanders have said.

Being in the war together is just another chapter of the storied history shared by the British and American militaries. It also underscores the benefits of the exchange program.

Since acquiring the attack aircraft in 2001, the British army has modeled its program after the U.S. Army, which pioneered the Apache 25 years ago as the successor to the Vietnam-era Cobra helicopter.

The Rolls-Royce engine is perhaps the sexiest modification the British have made to the helicopter, but the fight from the sky is essentially the same for pilots, said Fennema, who served in Iraq for 12 months during 2004-05.

Like its younger American cousin, the British army&#8217;s fleet comprises mainly helicopters, and the army regards the two-man Apache as its deadliest aircraft.

Though it took Fennema nearly a year to learn to fly the British model, his hours in the gunship span a decade and far outnumber those of his British co-pilots. Even the more experienced aviators in his squadron only recently transitioned to the Apache from the Lynx and Gazelle, utility helicopters the British modified for combat.

"The Apache is amazing. It&#8217;s just designed for fighting. It&#8217;s like going from a Mini Cooper to a Ferrari," said Maj. Jeremy Cook, commander of Fennema&#8217;s unit, 662 squadron, 3 Regiment. "But the flying isn&#8217;t that different. Weaponeering is principally about command. The basic flying and fighting tactics and techniques are the same."

Fennema, the squadron&#8217;s operations officer and second-in-command, is his right-hand man, said Cook, 37.

"Yes, we do things a little differently," said Cook, noting variations between British and American operations such as the location of the aircraft commander and co-pilot positions and the higher altitudes at which the British fly. "But it basically comes down to there being two ways to skin a cat."

Fennema said the higher-altitude tactic likely developed to better preserve Britain&#8217;s relatively small fleet of 67 Apaches. By contrast, the U.S. Army has 800-plus in operation and though none of them is deemed dispensable, the size of the fleet allows U.S. Apaches pilots to take greater risks than the British, he said.

However, it seems British Apache pilots have more flexibility and individuality in terms of executing operations because of their size, "whereas we&#8217;re more of a giant machine," he said.

Navigating the cultural and operational differences between the British and American militaries is at the heart of Fennema&#8217;s mission in the U.K.

He uses the commissary, hospital and even the flight line at RAF Lakenheath from time to time, but lives and works mostly removed from the U.S. military community, like his fellow exchange troops.

"Ironically, this exchange has made me more of a patriot. I&#8217;ve gone to war with them, and some of the closest relationships are built that way," said Fennema, who is stationed at Wattisham Airfield, about 40 miles southeast of Lakenheath.

"But it&#8217;s more than just personal connections. I represent America, and for many [British soldiers], I&#8217;m the first American they&#8217;ve ever really spent time with," he said.

It&#8217;s that soldier-statesman role that drives the longstanding U.S.-U.K. exchange program, which each military contends is their most robust.

Moreover, the close connection with British forces has given the U.S. greater access to the European military community, said Army Lt. Col. Anita Domingo, a foreign area officer at the U.S. Embassy in London.

The partnership gives American military leaders access to European meetings and conferences they might not be privy to otherwise, allowing them to communicate U.S. goals and needs in a forum outside of the context of NATO, she said.

And vice versa. In the case of the Apache program, the British take cues from the Americans about how to further exploit the helicopter&#8217;s endurance and ballistic punch.

The future of the two Apache forces appears to be heading toward a capability that will allow pilots to control unmanned aerial vehicles from the cockpit, Turner said.

"We need to keep in tune with the American fleet because otherwise we become a side-shoot which is no longer served by the wider Apache community," he said. "Commonality allows you to be flexible."

There is no formal measure of success for the program, no after-action reports or the like filed by servicemembers upon returning to their respective countries. Rather, it is the progression of these nuanced relationships that fuels the program.

Fennema has embraced these intangible goals. But the perspective he has gained and will impart on future U.S. military operations is the true benefit of the exchange, he said.

"I can and will share what the Brits are doing in Afghanistan. But I have built relationships with units, organizations and people in the British military that provide an understanding of not only how our best ally operates but why they operate like that," he said.

Meanwhile, the ubiquitous cup of British tea helps Fennema ply his trade as a U.S. pilot in U.K. territory. Embracing "the British way" of doing things has meant not only adjusting the way he fights and flies but also the way he unwinds after missions.

"The British have this idea that everything can be solved with a cup of tea, and that&#8217;s essentially how they do it. You have a bad mission and a cup of tea makes things better," he said.

He has made more buddies during his British tour than in his last job as a company commander with the 12th Combat Aviation Brigade in Germany. He chalks it up to the British army&#8217;s structure, which puts officers at the rank of major and below on a first-name basis.

Still, British and American troops essentially operate the same way, he said. Fennema can boil the experience down to two cliches: The United States and Britain are separated by a common language and are each other&#8217;s best ally.