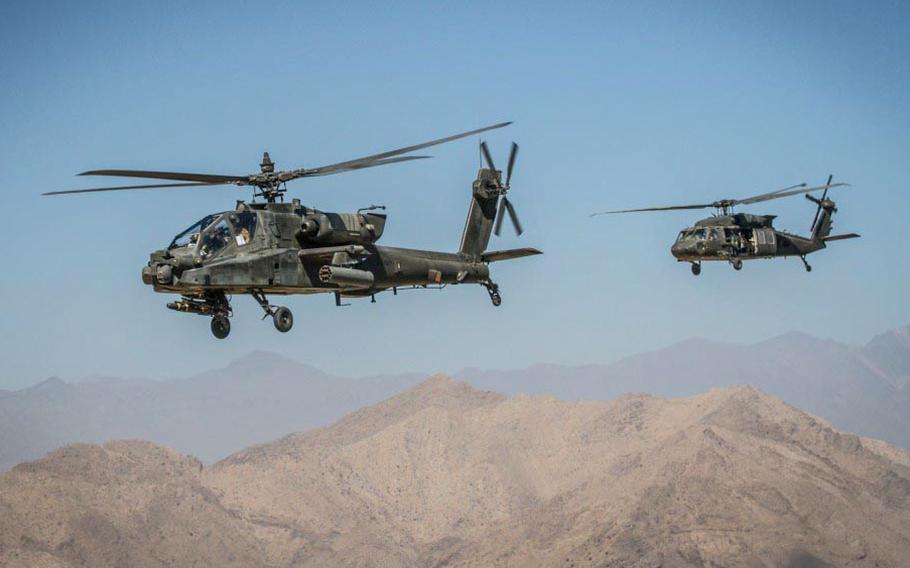 The Apaches can “see a long range at night” and strike targets from a great distance, which is helping Iraqi forces advance on the city, Maj. Gen. Gary Volesky told reporters at the Pentagon.

“That’s what they’re doing,” said Volesky, commander of 101st Airborne Division and U.S. and coalition land forces in Iraq. “We get into situations where we expect enemy activity to be … and that’s what we focus them on.”

There are an estimated 3,000 to 5,000 Islamic State fighters defending Mosul, which has roughly 1 million residents.

The Islamic State group has controlled Mosul for two years and has established layers of defenses, Volesky said.

“I expect the enemy is going to fight a full-fledged conventional defense in Mosul,” he said.

The Apaches are part of the complex set of weapons, including M1-Abrams tanks, high-mobility artillery rocket systems and upgraded Humvees, being used to retake Iraq’s second-largest city, Volesky said.

There are about 5,000 U.S. forces in Iraq, including between 100 and 200 advisers embedded with the advancing Iraqi troops.

But Volesky said the Islamic State group has fought back aggressively.

“Yesterday and the day prior, [forces have seen] a lot more mortars, more rockets. We’ve been able to counter-fire pretty effectively,” he said.

The Islamic State group has also used new and modified tactics in the battle, Volesky said. On Tuesday, the terrorist group used a car bomb explosion to delay Iraqi forces and enable their fighters to retreat. Last week, the U.S. military confirmed the group was rigging commercial drones with explosives and used a Styrofoam plane to kill two Kurdish fighters.

Volesky said the Islamic State group will likely to put up a stiff defense of Mosul but eventually lose their grip and morph into an insurgency.

He said the transition from conventional combat to counter-insurgency is deemed so predictable that the U.S. training regimen for Iraqi security forces is already being adjusted to prepare them for insurgent threats.

Volesky said some Islamic State fighters already are giving up their positions in the outskirts of Mosul and pulling back into the city. He said he expects this trend to continue.

At some point, he predicted, the Iraqi forces will prevail.

“I expect they (Islamic State fighters) are going to go into insurgency mode,” Volesky said. “That’s my assessment. That’s what we’re preparing the Iraqis for.”