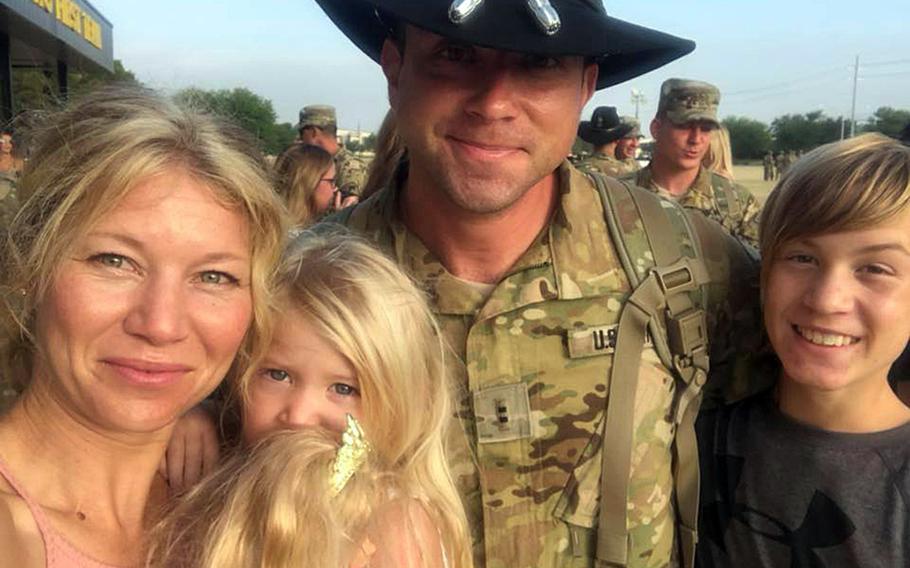 Chief Warrant Officer 2 David Knadle, second from right, his wife Silkey, daughter Starling and son Eason Bertone reunite in Fort Hood, Texas, on July 1, 2018, after the Army pilot finished a rotation in Germany. Knadle, 33, died while on a mission on Nov. 20, 2019, in Afghanistan. (Silkey Knadle)

Chief Warrant Officer 2 David Knadle, second from right, his wife Silkey, daughter Starling and son Eason Bertone reunite in Fort Hood, Texas, on July 1, 2018, after the Army pilot finished a rotation in Germany. Knadle, 33, died while on a mission on Nov. 20, 2019, in Afghanistan. (Silkey Knadle) 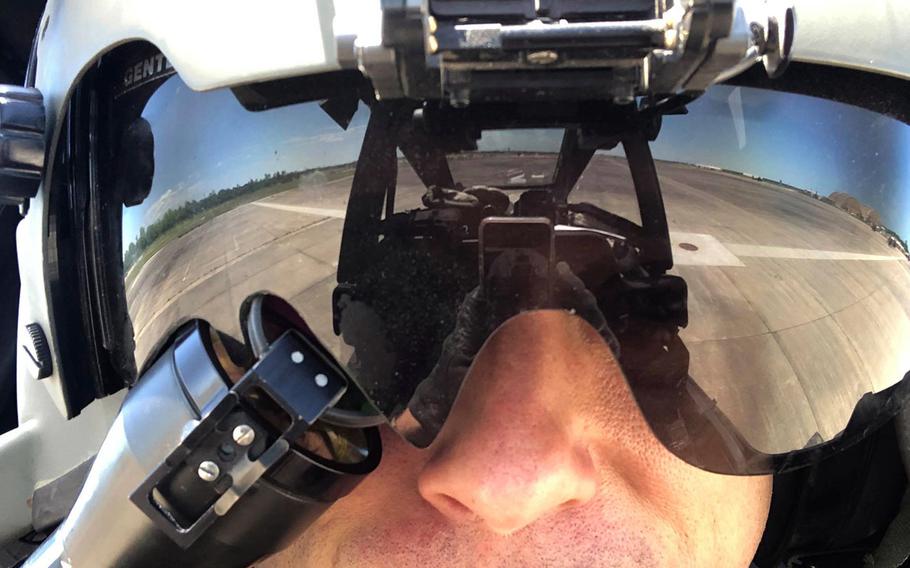 Chief Warrant Officer 2 David Knadle sent his wife this photo from his deployment in Afghanistan in the fall of 2019. (Silkey Knadle) 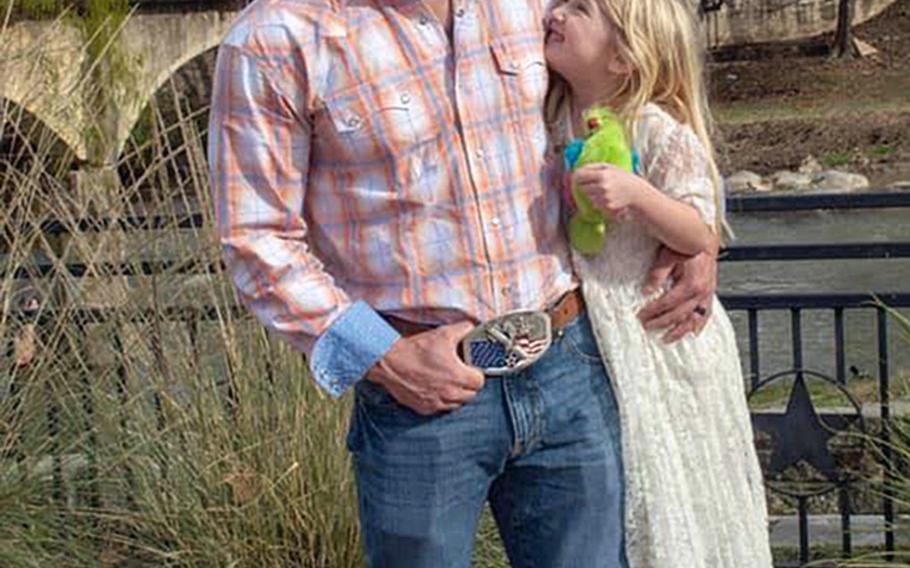 Chief Warrant Officer 2 David C. Knadle, shown here with his daughter, Starling, died while on a mission in Afghanistan on Nov. 20, 2019. (Silkey Knadle) 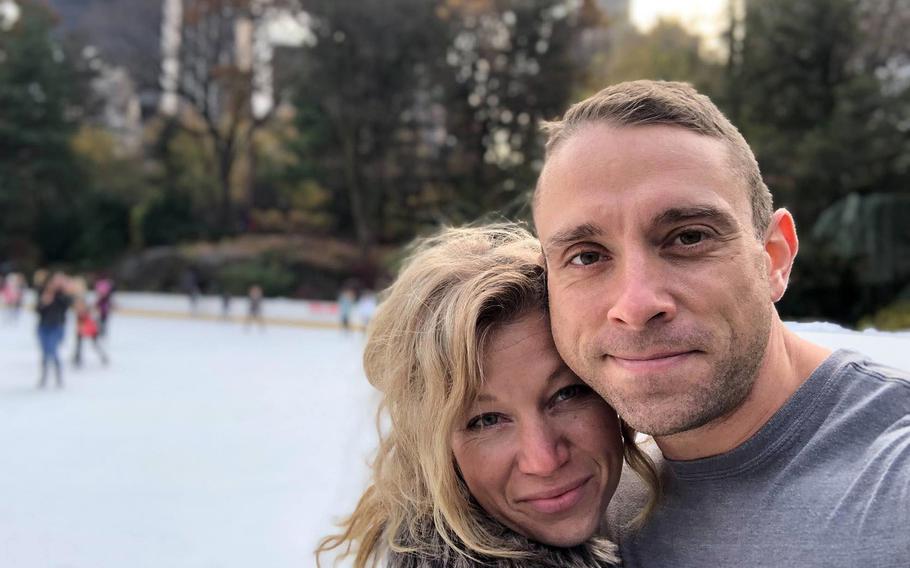 David Knadle and his wife, Silkey, pose for a Thanksgiving photo at Woolman Rink in Central Park, New York, N.Y., on Nov. 22, 2018. The two met while working at a financial firm in Fort Worth, Texas, shortly before he quit his job to become an Army pilot. (Silkey Knadle) 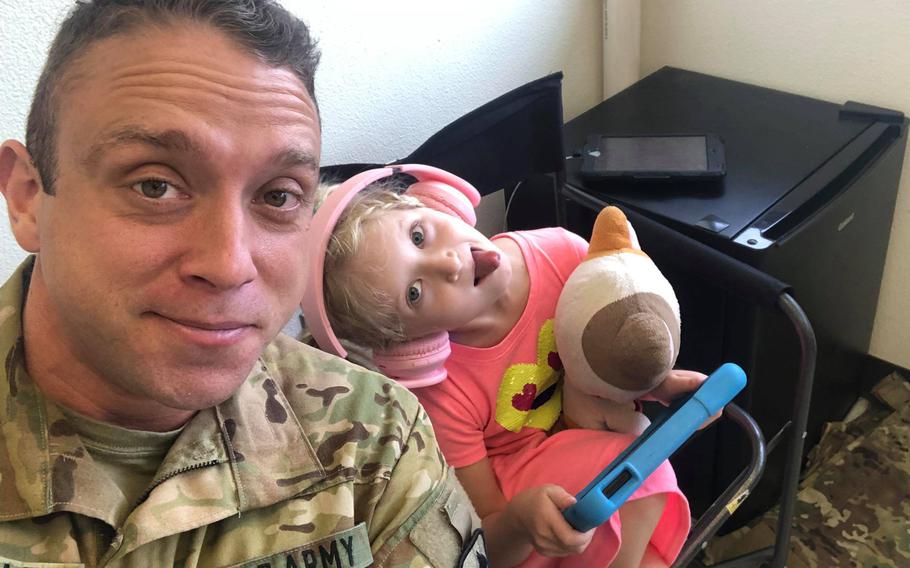 Chief Warrant Officer 2 David C. Knadle plays with his daughter, Starling, at his office in Fort Hood, Texas, in September of 2019, shortly before deploying to Afghanistan. Knadle, 33, died while on a mission on Nov. 20, 2019, in Afghanistan. (Silkey Knadle) 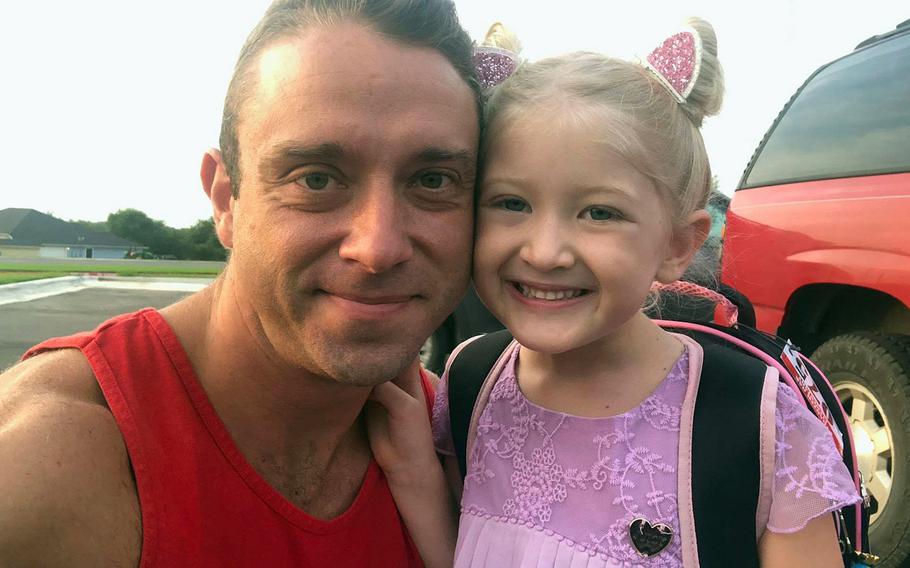 Every day before school, Chief Warrant Officer 2 David C. Knadle took a photo like this one, taken in Belton, Texas, in September 2019, with his daughter, Starling. Knadle, 33, died on a mission in Afghanistan on Nov. 20, 2019. (Silkey Knadle)

Five-year-old Starling Knadle sat on her mother’s lap, her 15-year-old brother sitting beside her wearing a cavalry Stetson, as six Army pallbearers loaded their father’s coffin into a waiting hearse during a ceremony at Fort Hood, Texas, on Tuesday.

After the dignified transfer of the Apache pilot’s remains, his daughter insisted she be allowed to put on her father’s dog tags, her mother said in a phone interview Wednesday.

“We talked about Daddy and his big muscles,” Silkey Knadle said — he had recently placed second in a bodybuilding competition. “She said her daddy is an angel in heaven with the biggest muscles and the biggest wings.”

David Knadle “could do anything,” Silkey Knadle said. “And if he didn’t know how to do it, he could figure it out.”

The two met while working at a financial firm in Fort Worth, Texas. Both had high-paying jobs, but he told her his dream was to become a pilot.

“You’re not getting younger,” Silkey Knadle recalled telling him. “If you’re going to do it, do it now.”

He joined the Army in 2013. Two years later, he was a pilot, and had started a family that by then included their infant daughter Starling and his wife’s son, Eason Bertone.

An avid athlete who began competitive bodybuilding shortly before his death, David Knadle had bonded with Eason through rock climbing. He often teased that he wanted to toughen up their daughter Starling, but with tickles and kisses, his wife said.

This fall, despite having orders to Colorado, he made a deal with a friend so he could deploy to Afghanistan, his wife said.

Never a person to shy away from a fight, “he knew the enemy was still there and active and looked forward to meeting them in person,” said his friend, Chief Warrant Officer 2 Travis Schroder.

“He knew when he strapped on the machine exactly what it meant and the dangers that came with it,” Schroder said. “He accepted these gladly and willingly.”

He deployed in October and flew his final mission the following month. Officials are investigating the Nov. 20 crash in Logar province that killed him and Fuchigami, a newlywed, the Pentagon said last month.

The Taliban, who often fabricate or embellish reports of their battlefield exploits, claimed to have shot down the helicopter, but Afghan officials said the downing was not caused by enemy fire.

The aviators’ deaths brought to 19 the number of Americans killed in Afghanistan so far this year, which has been the deadliest for U.S. forces since the end of major combat operations in the country in December 2014. More than 2,400 American troops have died in the country since the 2001 U.S.-led invasion launched in response to the 9/11 attacks.

A funeral will be held for David Knadle on Thursday at Vista Community Church in Temple, Texas.