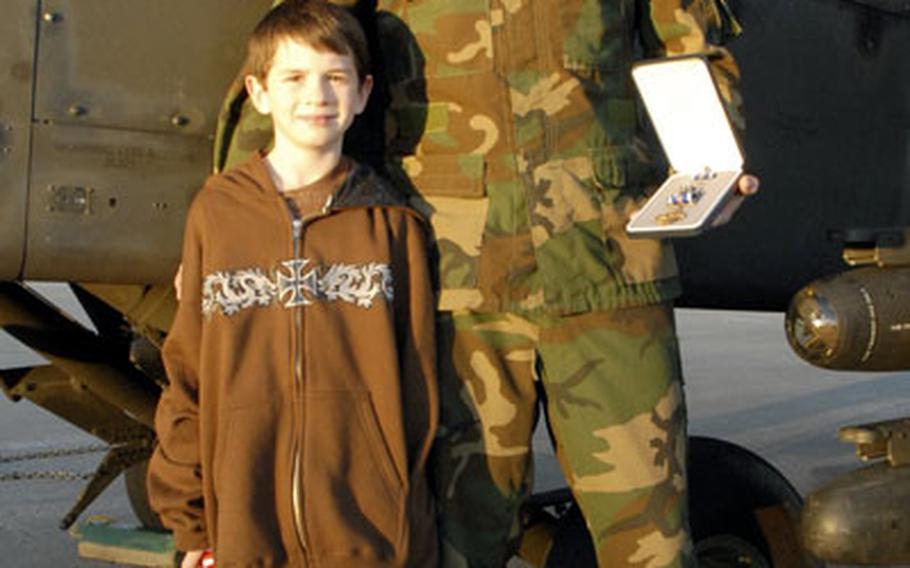 With his wife, Tiffany, and 8-year-old son Justin in attendance, Chief Warrant Officer 2 Philip Learn, 32, was given the nation&#8217;s highest award for aerial valor in a short ceremony at the Storck Barracks Theater.

Given to any person who, while serving in any capacity with the U.S. military, distinguishes himself or herself by heroism or extraordinary achievement while participating in aerial flight, the Distinguished Flying Cross falls just beneath the Silver Star.

Including his DFC, Learn walked away from a year in Afghanistan with six medals for aerial achievement, having earned five Air Medals, two of them with &#8220;V&#8221; devices for valor.

Part of Learn&#8217;s job on Dec. 4, 2005, was providing aerial security to two CH-47 Chinook helicopters, and he and his co-pilot were flying last in the flight of three. Learn&#8217;s co-pilot and gunner during the mission, Capt. Brian Hummel, also was awarded the Distinguished Flying Cross for his heroism. He has since left the unit.

After one of the Chinooks took fire and was forced to land, Learn piloted his Apache, call sign Phantom 32, on numerous attack runs to protect 34 soldiers who had evacuated the damaged Chinook, according to the narrative Learn&#8217;s commanding officer in Afghanistan wrote when recommending him for his DFC.

On numerous occasions, the narrative reads, Learn flew directly into enemy small arms and rocket fire, engaging and eliminating militia on each pass, and that he and his co-pilot&#8217;s actions were one of the primary factors in saving the lives of the 34 passengers of &#8220;Mustang 11.&#8221;

All told, Learn flew for more than 10 hours that day. He mentioned that normally a pilot in a garrison environment is required to fly 70 hours every six months to maintain proficiency. Learn flew more than 700 hours as a member of Task Force Storm in Afghanistan.

Learn&#8217;s present commanding officer, Lt. Col. Dan Fallin, said he felt honored to be able to present such a prestigious award to one of his pilots, but he felt that Learn summed it up best when he said that &#8220;although it&#8217;s a significant award for an individual, it represents the teamwork within the battalion.&#8221;

The year in Afghanistan was his first combat deployment, and Learn said that because of the tight group of pilots and maintainers, &#8220;it was as good as it could have been under the circumstances.&#8221;

From the starts of the wars in Afghanistan and Iraq to July of this year, only 95 DFCs had been awarded, 38 for actions in Iraq and 57 for Afghanistan, according to the Army&#8217;s Human Resources Command Web site.

Now working as an instructor pilot for Company B, 3rd Attack Reconnaissance Battalion, 159th Aviation Regiment, Learn and his family, which also includes three daughters, just extended to keep flying in Europe for another three years.