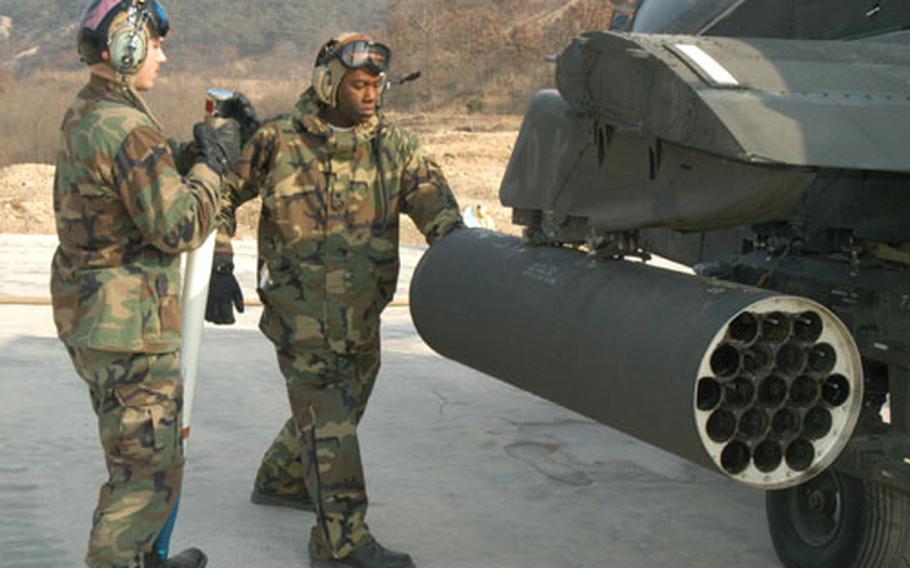 Sixteen Apache crews, who call each other the &#8220;gunfighters&#8221; and have adopted the cartoon character Yosemite Sam as their mascot, are qualifying in Table 8 gunnery skills in an exercise that runs until January 13.

Skills practiced include firing at fixed and moving targets from both stationary and moving positions, as well as night gunnery. Once qualified, crews will be ready for Table 10 and 12 exercises involving platoons of three helicopters or companies of six helicopters fighting together.

The Apache is armed with a 30mm chain gun, 2.75-inch Hydra rockets and Hellfire missiles.

The missiles aren&#8217;t fired during the training because their five-mile range makes using them dangerous on the 2.5 mile-long Rodriguez Range. Missile practice is done at Chickdo Island near Kunsan Air Base.

The pilot or co-pilot can fire the Apache&#8217;s weapons in several ways, officials said. Helmet Display Units allow them to shoot targets simply by looking at them; they can also use physical sites mounted on the aircraft or use radar to sight a target.

Battalion Operations Officer Maj. John Shawkins said crews practice for six hours in simulators before the gunnery exercise. To pass Table 8, they must score 70 points out of 100 in eight out of 12 engagements.

Shawkins said the Apache&#8217;s fighting methods grew out of tank tactics rather than those of other aircraft.

&#8220;Our tactics are a lot different to the fast movers such as jet aircraft. We fight much like a ground unit. One helicopter takes up a watch position and we bound up like tanks &#8230; and mass our fire,&#8221; he said.

&#8220;Our main role is close combat attacks in support of the ground commander. We focus on the close fight.&#8221;

&#8220;We train all the time to shoot these aircraft. It gives the armament people and the crew chiefs a chance to apply the training they work on during the rest of the year,&#8221; he said.

The Apaches are tank killers, and in a head-to-head battle with a tank, Helms naturally prefers the helicopter.

The Apaches have proven themselves resilient aircraft in Iraq where the machines are renowned for staying aloft despite taking heavy ground fire, the pilots said.

Chief Warrant Officer John Kleven, the battalion&#8217;s master gunner, started flying the Apache in 1988, a year after it started service.

The modern Apache is a better aircraft than the original A-Model because of its Longbow radar that allows the crews to &#8220;paint the battlefield,&#8221; lock targets, and send the information to the missile system, he said.

The worst mistake to make in gunnery is fratricide &#8212; or hitting friendly targets &#8212; something the battalion trains to avoid.

The key to good gunnery, Kleven said, is a thorough understanding of the basics.

&#8220;We are looking at their ability to acquire the targets, use proper switchology (hitting cockpit switches in the right order), and engage the targets,&#8221; Kleven said.