Apache copter pilots learning technique of firing during a dive 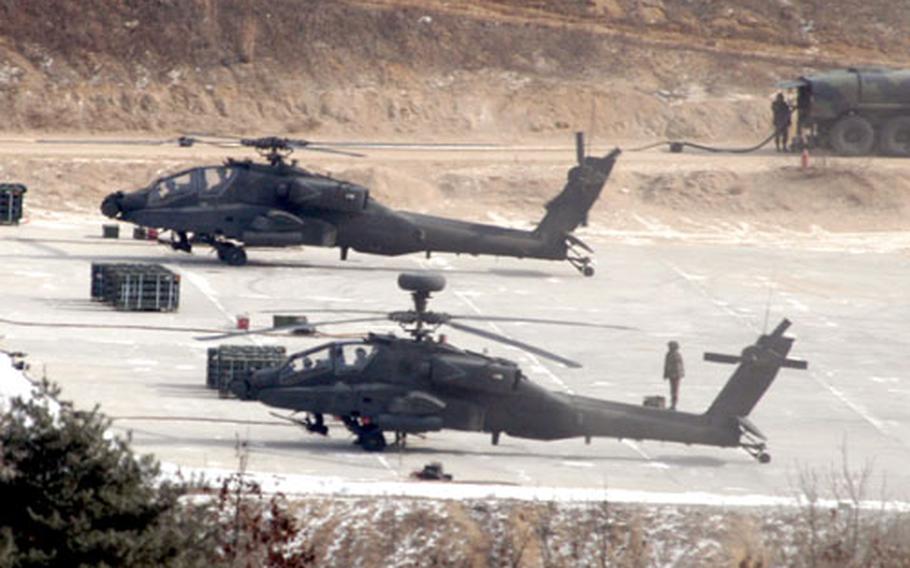 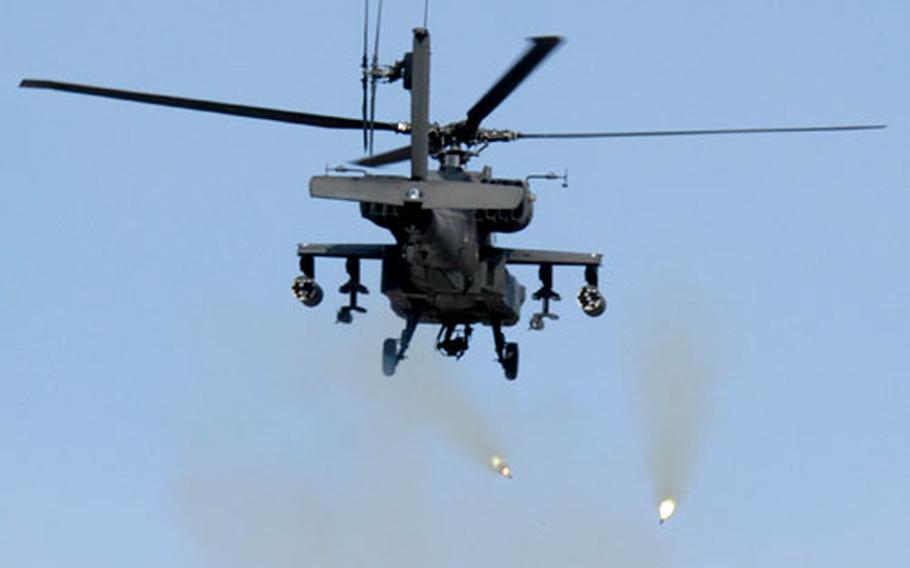 RODRIGUEZ RANGE, South Korea &#8212; Apache helicopter pilots in South Korea are learning to fire during a dive, a technique the Army dropped after the Vietnam War but has resurrected for the war on terror.

At Rodriguez Range on Tuesday, Apaches from 1st Battalion, 2nd Aviation Regiment hovered at 2,000 feet, then pointed their noses toward the ground and plummeted earthward before unleashing bursts of 30 mm chain gun fire and 70 mm rockets at ground targets.

Chief Warrant Officer Richard Handlon, 37, of Indianapolis, who is the standardization instructor pilot for the battalion and oversees training for more than 50 aviators, watched the action from a control tower. The veteran pilot said Army pilots hadn&#8217;t trained to do diving fire in years.

&#8220;Diving fire is old-school stuff from Vietnam that has made its way back into Army doctrine. In Vietnam there was no air threat and it was all diving fire,&#8221; he said.

However, during the Cold War, helicopter pilots trained to go up against sophisticated Soviet air defense systems. That meant hovering at low altitude, sneaking into a position, firing and getting out fast.

&#8220;Now, against the less sophisticated enemy of the war on terror, we need to fire closer to friendly forces,&#8221; Handlon said.

When a helicopter fires its rockets while traveling above 33 knots (34.5 mph), the rockets fly through undisturbed air, he said.

Before the 1-2 pilots headed to the range, they received instruction in advanced combat maneuvering from a team sent to South Korea by the Army&#8217;s Aviation Directorate of Evaluation and Standardization.

At the range the Apaches practiced diving fire with their noses pointed down at 10 degrees, but Handlon said they could perform the maneuver at up to 60 degrees nose down.

The Army realized that diving fire, which had proved its worth in Afghanistan and Iraq, had a role to play in South Korea, he said.

&#8220;Army doctrine training in the past has been large armor formations. Now we say: &#8216;See that infantry guy on the ground? North of him 300 (meters) is a target I need you to remove.&#8217; If you cross a ridgeline into a valley [in South Korea], you are going to have to drop the nose and engage the target. It will give us another tool in our box to use,&#8221; Handlon said.

One of the pilots training to do diving fire, Chief Warrant Officer Jody Kilburn, 35, of Thompsonville, Ill., said he learned the technique&#8217;s value when he deployed to Afghanistan with Task Force Talon shortly after Sept. 11, 2001.

Task force pilots started to do diving fire out of necessity because they were operating at high altitudes, where the air was too thin to hover, he said.

There are two ways to do diving fire, Kilburn explained. In a cooperative engagement, the front seat pilot finds the target and enters the range and the backseat pilot lines up the target in his cross hairs.

However, the most effective method in Afghanistan &#8212; and the technique used in 1-2 Aviation training &#8212; involves the backseat pilot doing everything, he said.

&#8220;In Afghanistan and Iraq this type of fire became very important. It happens very fast because the aircraft is going into a dive and it is continually speeding up. There are a lot of things happening to the helicopter and there is a whole lot that goes on for the pilot to be able to hit the target,&#8221; he said.

About 20 percent of the battalion are veterans of Iraq or Afghanistan, he said.

&#8220;It helps people understand the necessity of it. Guys can see we had to do this or that,&#8221; said Kilburn, who recalled using diving fire in his first battle against the Taliban &#8212; Operation Anaconda.

&#8220;I had two engagements. The backseaters did 99 percent of the firing that day because everything was so fluid. We were doing close combat attacks. The infantry guys were shooting RPGs (rocket-propelled grenades) and small arms. There wasn&#8217;t any standing off and finding the target. I was usually seeing it with my eyes.

&#8220;In one instance the guy I was covering saw a bunch of guys with a big machine gun. They shot at him. He shot some rockets and said they were low and to the left.

On another mission, Kilburn&#8217;s front seat co-pilot was shot in the face, he said.

&#8220;We shot and broke off the target to the right and rounds came through the bottom of the aircraft. A bullet grazed his face and nicked a big old sliver off him. If he had been forward two inches he would have been minus a jaw or something,&#8221; he said.

The battle proved how tough the Apaches were, Kilburn added.