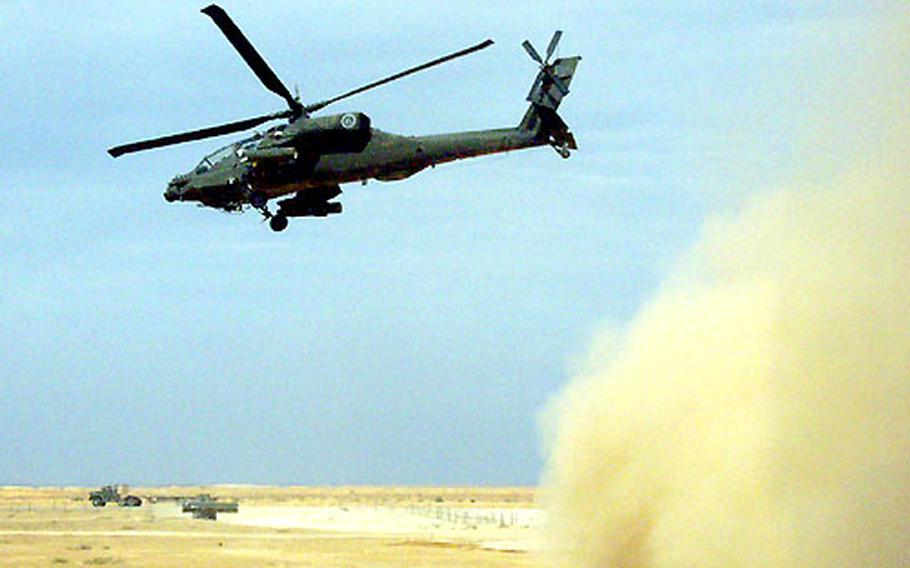 Eighteen Longbows from the 6th Squadron, 6th Cavalry Regiment flew into the night March 23 to attack posts of the 10th Brigade of the Iraqi Republican Guard&#8217;s Medina Division.

They never got there. They were turned back by well-organized ground fire that seemed to come from every house and shop along the way, inflicting heavy damage to the helicopters.

The 6-6 Cavalry&#8217;s patched-up Longbows returned Friday through Sunday to attack the same bases. This time, the Iraqis they encountered cheered and waved at the sight of the aircraft.

Pilots from the 6-6 Cavalry and its sister regiment from Illesheim, Germany, the 2nd Squadron, 6th Cavalry Regiment, which flew in the same area Thursday and Friday, discovered large quantities of weapons and ammunition apparently abandoned by the Republican Guard.

Maj. Kevin Christensen, the 6-6 Cavalry&#8217;s operations officer, said his unit had discovered 13 missiles, possibly Scuds or al-Samouds, some on trucks and apparently ready to fire.

They also found and destroyed many air defense systems, anti-aircraft artillery, armored vehicles and caches of ammunition the size of small houses.

The Medina&#8217;s home turf south of Baghdad had been bypassed by U.S. ground forces. The 3rd Infantry Division rolled past to the west and the 1st Marine Division skirted it to the east.

The job of the 11th Aviation Regiment Apaches was to sweep through the area to make sure it was clear of Republican Guards. The soldiers also wanted to report or destroy any weapons that might threaten troops from the 101st Airborne and 82nd Airborne, two divisions near Al Hillah that were preparing to push north.

The pilots had been eager, and a bit concerned, about returning to the scene of their previous misfortune.

Christensen said it gave 6-6 Cavalry pilots a big boost to return to the same area where they&#8217;d been mauled.

The 2-6 Cavalry had been scheduled to fly a deep-strike mission March 24 against the Medina division, but the mission was called off after the Longbows of the 6-6 Cavalry and the 1st Battalion, 227th Aviation Regiment were damaged so badly.

The 2-6 Cavalry pilots said they saw lots of military hardware during their missions late last week, but most of it clearly was abandoned.