Anything goes in pedestrian zone in Sachsenhausen 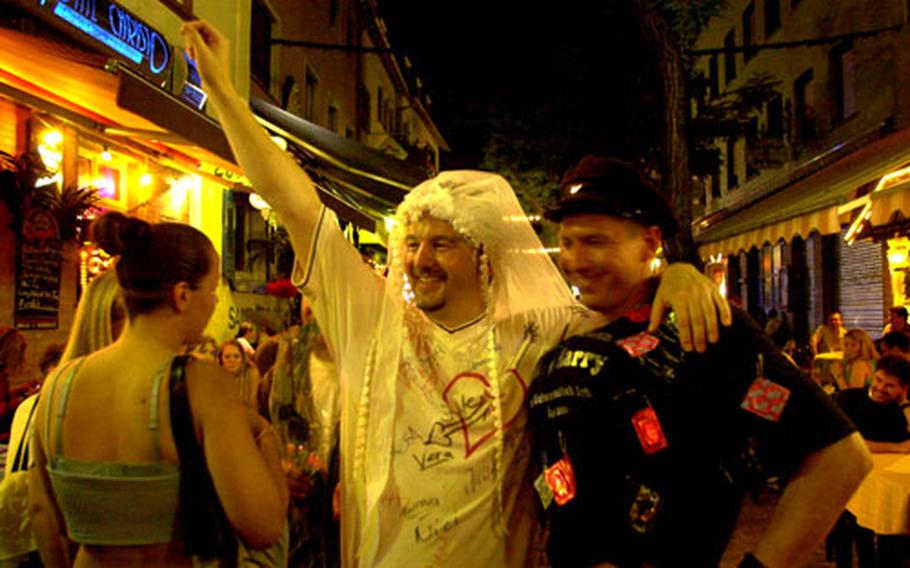 In the summer, everybody is a star as incredibly diverse crowds move up and down the pedestrian area of Sachsenhausen, Germany, past the people watching from the outdoor seating. This “bride” and leather-clad man — complete with balloon breasts and condoms pinned to his T-shirt — look like they came from a gay pride march, although both men were seen kissing women as the night went on. In Sachsenhausen, you never know. (Terry Boyd / S&S)

FRANKFURT, Germany &#8212; The pedestrian zone in Sachsenhausen is a cobblestoned path that takes partiers within one D&#246;ner kabap and a hooker of paradise.

Think of this international mix of bars, discos and eateries as the state fair midway for that great state of inebriation. The Frankfurt walkway is a perfect place to party. First, there are no cars. Second, there are a couple dozen places to stop for drinks. And third, everyone is as drunk as the next, so a hooker might not even be necessary to get to paradise.

Getting the fade on through what the Germans call the &#8220;Fussgangerzone&#8221; is done the same as at any other hot spot around the world. But this one has a more international flavor.

Sachsenhausen is one of the most cosmopolitan party destinations in Europe, according to Robin van de Kuijt, a half-Dutch, half-Italian student. He said he meets people from around the world while partying on the streets between the Alte Brucke and Obermainbrucke bridges that make up the heart of this bar-land. Every night he&#8217;s been out, he said, he ends up speaking German, Dutch, English, Spanish and/or Italian.

And it&#8217;s a place for both the young and the old. The dynamics go from all-out partying to mellow wooden-bench wine sipping.

And after a night of dirty dancing in a cubbyhole of a bar with hot bodies, or quietly imbibing in a corner of a pub with a few friends, there&#8217;s plenty of food waiting for the 2 to 5 a.m. crowd. The aroma of Thai, German and Turkish linger in the nostrils, either enticing passers-by to reach for cash or for weak stomachs to reach the breaking point.

There are no real areas overburdened with just one nationality. However, many American regulars have staked claim to a couple of spots.

From what two Stars and Stripes reporters could tell, the number one place for troops stationed overseas or international students soaking up the under-21 booze is a South African-themed bar called Kyalami.

Smailis said he loves his American clientele and revels in the U.S. dollars tacked up along the wooden d&#233;cor. These are like dollars pinned up along any bar in America &#8212; there are names of people and units, declarations of who&#8217;s butt they&#8217;re going to kick in Iraq, and what they love at that one fleeting drunken moment.

Another favorite for the more rowdy Americans is the oldie-but-goodie Speak Easy bar. This biker hangout is known for its heavy music and even heavier drinking.

The owner, J&#252;rgen Spoether, said there are only two phrases his American beer-drinking customers seem to know in all the decades he has been serving up the juice.

Outside of the GI hangouts, there are more mellow times available at the O&#8217;Dwyer&#8217;s Irish pub or places to sit and enjoy good music and good drinks like the Hard Rock Caf&#233;.