Anyone can win race to moon, Gemini astronauts say 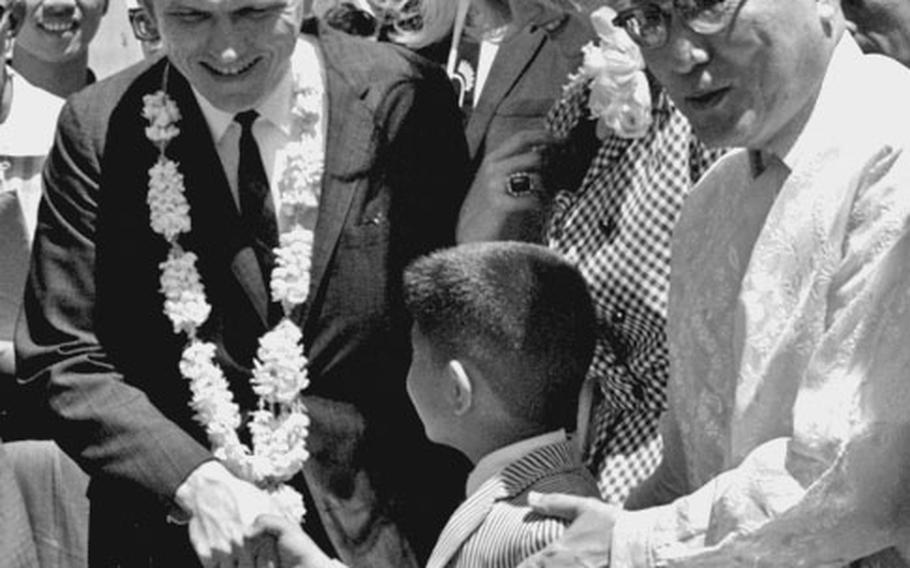 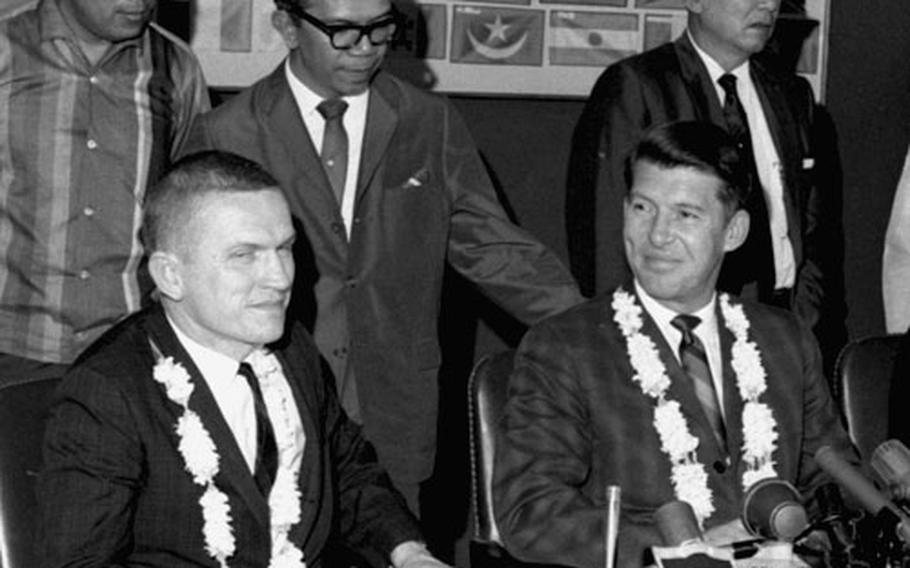 Astronauts Frank Borman of Gemini 7, left, and Wally Schirra of Gemini 6 at a Manila press conference in March, 1966. (Juanito Pardico/Stars and Stripes)

TOKYO — No nation now has a booster rocket powerful enough to put a man on the moon and bring him back safely, U.S. astronauts Walter Schirra and Frank Borman said here Wednesday.

The spacemen, on an eight-nation tour of the Far East, told newsmen that while the U.S. has no booster capable of a safe lunar landing, upcoming tests of the gigantic Saturn and Saturn V rocket motors should provide NASA with all the power needed for the trip.

An Apollo moon shot, designed to land two men on the lunar surface, is tentatively set for 1970, according to the space twins who recorded a historical rendezvous with another manned satellite last December.

The astronauts said the recent Russian soft lunar landing of an instrument package was "an achievement," but added that it was no indication of which nation will land a man on the moon first.

"We don't know exactly what the Russians plan," said Schirra, a Navy captain. "but we know what we must do to get to the moon. We know we'll have our share of problems, but we should get two men there by 1970."

"Our space program is not in competition with the Soviets," Borman added. "It's well planned and thought out. We should see manned planetary expeditions within my lifetime," the 37-year-old Air Force colonel said.

"The rendezvous in December was necessary to perform a lunar mission," said Schirra, who at 42 is the oldest active U.S. astronaut.

Schirra called the rendezvous "a significant goal in our present space program."

Borman told newsmen. "Our space information and the benefits of our accomplishments are available to any nation that wants to use it for its own peaceful space exploration program."

He did not say whether the U.S. and Russia had exchanged any technical information about successes and failures in their space flight programs.

He added he was particularly impressed with Japanese electronics, and said he carried a Japanese-made light meter with him on his 14-day record-shattering flight.

Describing his impressions of the Gemini-7 missions, Borman quipped, "Well, I think it was safer than driving in Tokyo."

"We didn't have any really trying times." he said. "In fact, zero gravity was quite comfortable. The food was freeze-dried, and we enjoyed it after a fashion — sort of like tasty toothpaste."

When asked whether he missed his wife's cooking on the long space voyage, Borman said, "Well, my wife's stew is just about average, so I guess I really didn't miss it much."

Sue Borman, the astronaut's blonde wife, who sat next to him during. the press conference, smiled at the joke. Later, she told reporters. "I'm not technically-oriented — I'm strictly a 'momma-san.' I'll admit I was worried during Frank's flight."

The Bormans and Schirras leave Tokyo Saturday for a two-day visit to Seoul.