Any airman can make a difference in U.S. legislation, says sergeants' association head 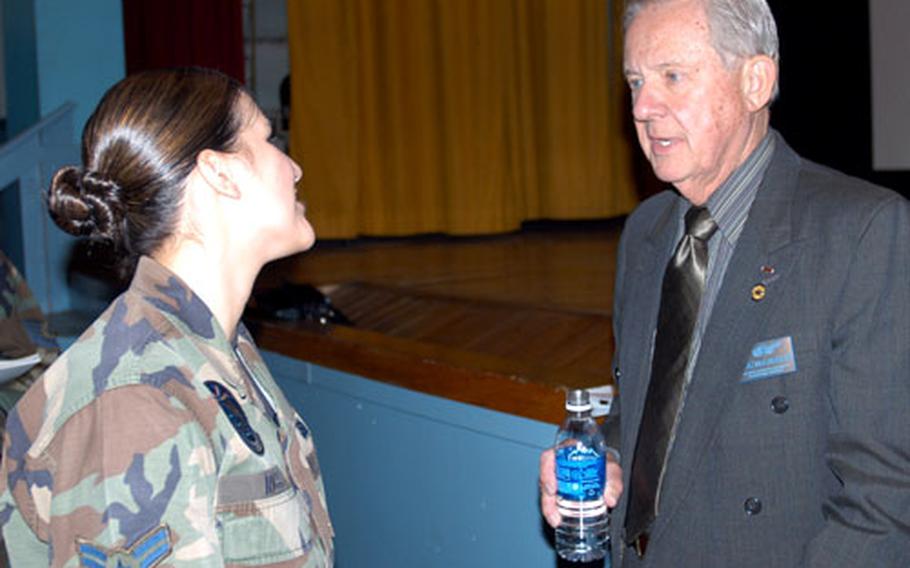 His mission, he said, is to inform airmen of specific legislation before Congress that could affect them now or in the future as military retirees and how they can contact their senators and congressional representatives to sound off.

One of the association&#8217;s top initiatives is improving the Montgomery GI Bill, McCauslin said.

For example, if airmen don&#8217;t use it within 10 years of leaving the service, the benefit disappears. McCauslin said the association would like to see the cut-off period extended to at least 15 years.

The association also is pushing for the ability to transfer the benefit to someone else, such as a dependent child, and being able to use the money for vocational school.

While there are no bills with teeth before Congress addressing those changes, McCauslin said, he urged airmen to call their representatives and insist the bill be reviewed and changed.

Another education benefit McCauslin wants to see reformed is the service&#8217;s tuition assistance.

And the association supports a repeal of the Uniformed Services Former Spouses Protection Act, which permits states to treat military retired pay as property in divorce cases and be divided accordingly.

McCauslin said there are no proposed bills as of yet to change the law.

Military bills to keep an eye on

The Air Force Sergeants Association supports or has interest in a number of bills and legislative issues before Congress. According to the association&#8217;s president, retired Chief Master Sgt. John &#8220;Doc&#8221; McCauslin, they include:

HR303, the Retired Pay Restoration Act, would permit certain additional retired U.S. military members who have a service-connected disabilities to receive both disability compensation from the Department of Veterans Affairs and retirement pay.HR579 and S604, the Health Care Protection Acts, would prohibit certain increases in fees for military health care.HR115, for military members without a surviving spouse, would allow payment of death gratuity to minor children before the age of 18.HR1750 would extend from 90 days to one year protection from foreclosure after a military member leaves active duty.To register their views, servicemembers should call the Capitol Hill switchboard at 1-888-762-8760 and ask for the offices of their senators and House representatives, he McCauslin said.

For more information about AFSA and the issues it supports, go to: www.afsahq.org