Anticipation kicks into high gear for families on Okinawa 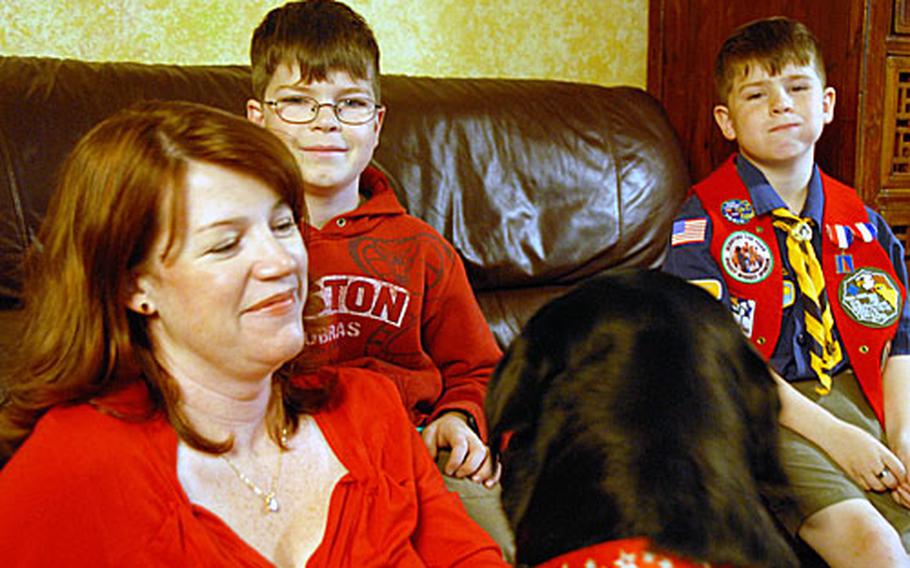 Amy Hittle and her two sons, Eric, left, and Alex, and the family dog, Daisy, are eagerly awaiting the return of Maj. Patrick Hittle, who has been deployed with 9th Engineer Support Battalion since August. The battalion executive officer gets back in about two weeks. (Megan McCloskey / S&S)

CAMP FOSTER, Okinawa &#8212; Christmas was two -and-half months ago, but at the Spradlin house the tree is still up.

The holiday, the presents and 7-month-old Alexandra are waiting for Capt. Dev Spradlin to get back from Iraq.

The Marines of 9th Engineer Support Battalion are almost back from their seven-month deployment to Camp Taqaddum, Iraq, and their spouses and families are getting ready for them to be home again.

When the month began last week it marked the beginning of the final countdown.

Sky Ladd, who is married to Staff Sgt. Joshua Ladd, said she tries not to think about the homecoming because she gets so excited. She said she has a shoebox full of notes of &#8220;things I want to remember to tell him.&#8221;

The upcoming reunion will bring adjustments to routines, so room can be made again for the returning family member.

Dinner has been eaten out or has been meals such as scrambled eggs or oatmeal.

She rearranged the furniture and did &#8220;a little shopping while he was gone,&#8221; she said, pointing out a hutch, a painting and couple of small cabinets.

The Hittle dog, too, will have to adjust. Daisy, a black lab, will be kicked back to the floor from the bed.

Megan Duesterhaus, who is a personal trainer and a group fitness instructor, said since her husband, 1st Lt. Greg Duesterhaus, left her days have started at 5 a.m. and sometimes don&#8217;t end until 9 p.m.

Duesterhaus said the deployment taught her independence and self-reliance.

Spradlin, who drove herself to the hospital to give birth and then home afterwards, has saved 54 pages of e-mails from her husband on a Word document that she plans on showing her daughter someday.

The Marine captain said she is counting the days until she can introduce the two.