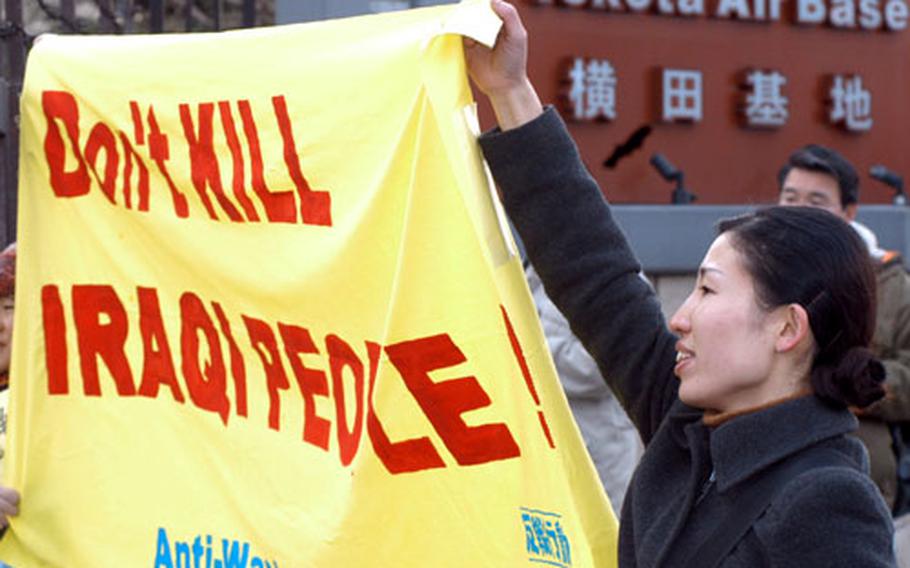 Midori Tachibana, 27, helps hold up a banner in front of the main gate at Yokota Air Base Saturday morning during an anti-war demonstration. The gate was closed to traffic — and Americans were scarce — for about 20 minutes, while about 80 Japanese protested a possible U.S.-led war against Iraq. (Jennifer H. Svan / S&S)

Midori Tachibana, 27, helps hold up a banner in front of the main gate at Yokota Air Base Saturday morning during an anti-war demonstration. The gate was closed to traffic — and Americans were scarce — for about 20 minutes, while about 80 Japanese protested a possible U.S.-led war against Iraq. (Jennifer H. Svan / S&S) 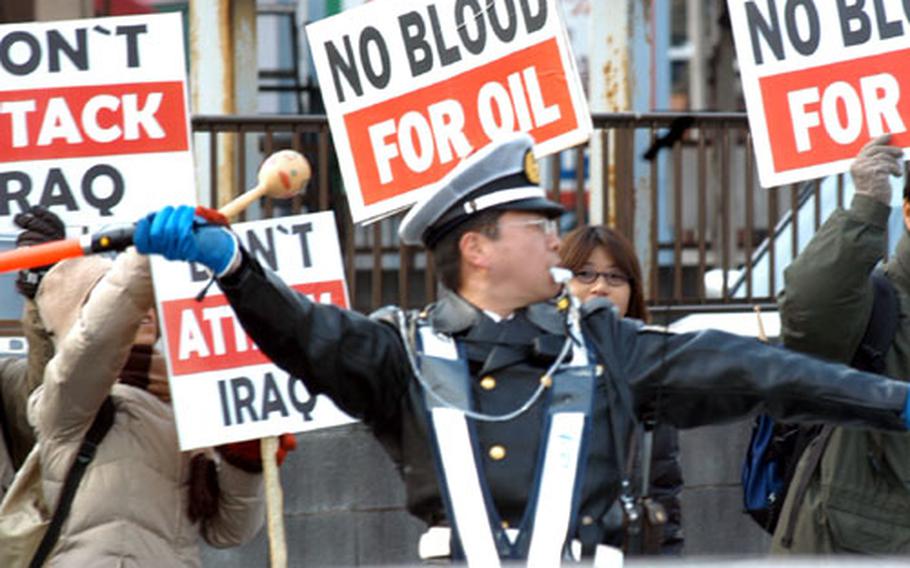 A Japanese policeman keeps protesters away from traffic during an anti-war demonstration outside Yokota Air Base on Saturday morning. About 80 Japanese chanted slogans such as, "War is no answer." (Jennifer H. Svan / S&S) 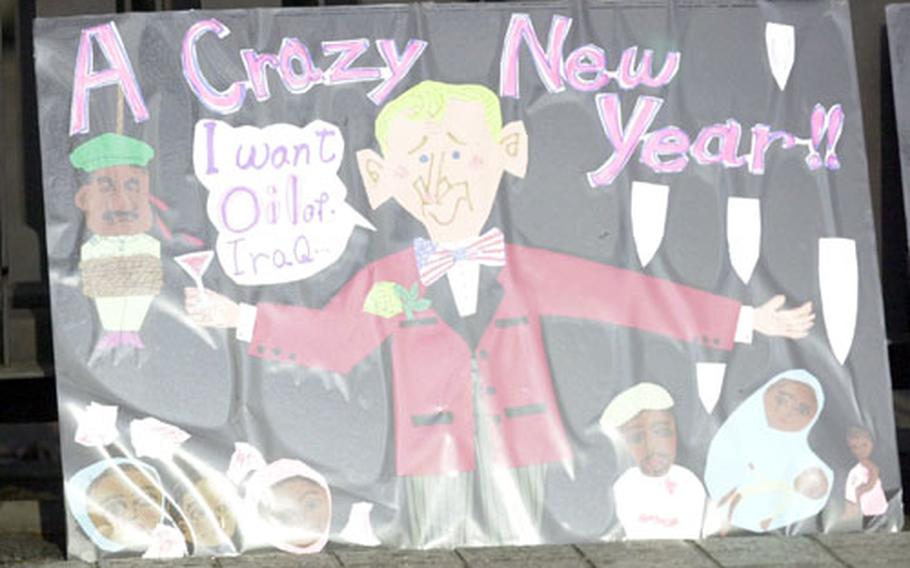 Some of the signs showed diapproval for President Bush at an anti-war protest in central Tokyo on Saturday. (Jason Carter / S&S)

But no one showed.

Military members were told last week to stay away from the demonstration. Guards scattered after closing the Fussa gate, leaving more than half a dozen Japanese police to control the crowd. The only American visible through the iron bars was a man on a mountain bike, who watched the commotion from a distance before losing interest and disappearing.

About 80 people from various Japanese political and environmental groups joined the rally, which coincided with anti-war demonstrations planned throughout Japan and in more than 25 countries over the weekend.

Protesters fear a war could start in weeks as the United States continues its military buildup in the Persian Gulf.

In the sleepy town of Fussa, about 30 miles west of Tokyo, protesters backed up traffic as they marched up a side street and on sidewalks, carrying and shouting anti-war slogans.

They oppose a possible U.S.-led war against Iraq and Yokota&#8217;s participation in the conflict, they said.

&#8220;During the Gulf War, they sent supplies into the war zone. We speculate they will play a big role in this war as well,&#8221; said Toshimasa Imai, 46, a member of the Tokyo-based environmental group, Eco-Action 21.

Demonstrators also said they believe the United States will attack Iraq to usurp control of oil reserves in the region. Some wore signs reading &#8220;No Blood for Oil.&#8221;

Others said they oppose a war with Iraq because they fear the United States would use uranium-depleted ammunition, as it did in the Gulf War, which has been linked to leukemia, cancer and birth defects.

Before marching along Route 16 to the Fussa gate, professionals, housewives and students gathered in Fussa Park to discuss their beliefs and practice chants in English, albeit broken, such as &#8220;Not Support War for Oil&#8221; and &#8220;Iraq Attacking No Justice.&#8221;

The protesters prepared a petition in English for Yokota military members. They plan to mail it, since no one was at the gate.

&#8220;We hope the U.S. servicemen will refuse to perform acts against your conscience,&#8221; part of the petition read. &#8220;Are you going to the battlefield for your loved ones or oil? Please think twice what means to you.&#8221;

Some said they were still hopeful for a peaceful resolution to the brewing conflict between the United States and Iraq.

&#8220;I learned this could be stopped like the Vietnam War, so that&#8217;s why I joined,&#8221; said Kimi Takahashi, a 17-year-old high school student participating in her first protest.

Protesters also gathered Saturday at Hibya Park in Tokyo for a concert, march and rally. About 5,000 people participated, representing a mixture of nationalities.

Several organizations coordinated the protest, including Amnesty International in Japan. Sonoko Kawakami, the group&#8217;s campaign coordinator, said it wasn&#8217;t meant to be anti-American.

Christopher Roosa, a visiting American businessman and the commander of a Marine Reserve unit in Alabama, stumbled on the demonstration. He criticized the rally and said the protesters don&#8217;t understand the United States&#8217; responsibility to fight rogue nations.

While Americans stayed away from the Yokota demonstration, airmen surveyed on Friday said they weren&#8217;t bothered by it.

Staff Sgt. Robert Williams, 32, said he hopes for peace in Iraq. &#8220;I believe there are more pressing matters, at the moment, than Iraq,&#8221; he said, referring to North Korea.

&#8212; Naoko Sekioka contributed to this story.

On Okinawa peaceful plea against war

The gate remained open for traffic as the demonstrators hung banners on the fence and listened to folk songs.

&#8220;We are joining people in U.S. and around the world to protest against the imminent U.S. attack on Iraq,&#8221; said Yukio Kinjo, 54. &#8220;Voices from Okinawa alone may be too small to stop the war, but if people around the world, including the United States and Iraq, stand up together, our voices will become big enough to deter this war. We still have time left.&#8221;

&#8220;For those of us who live on Okinawa, Americans are our longtime neighbors,&#8221; she said. &#8220;We are not accusing the American people for a possible attack against Iraq by their government. We want the American people to join us. If you are a parent, you know how precious is the time you spend with your children. Bombing Iraq would deprive Iraq families of such happy moments.

Along the fence line, Shizuko Hanashiro, meditated for peace as she waited for a friend.

&#8220;This protest expresses the voice of the Okinawan people, who experienced the ravages of a ground battle,&#8221; she said. &#8220;The pain and suffering our parents and grandparents went through are what we have to remember today and hand down to the next generation. We must remember so the world will not repeat the tragedy.&#8221;