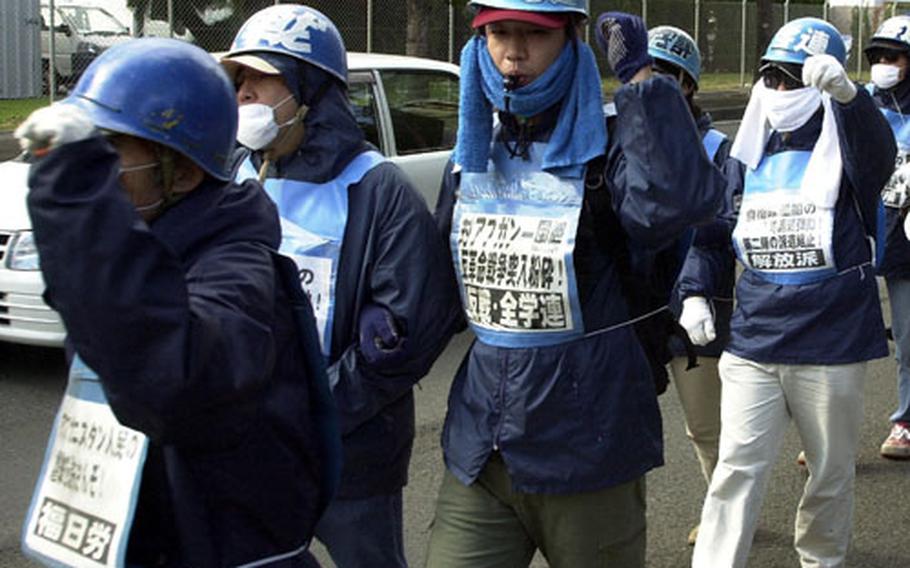 U.S. military action in the war on terror, expected to draw protestors this weekend, also has drawn protests in the past. Above, about 100 protesters marched near Sasebo Naval Base in November 2001, protesting Japanese participation in the war on terrorism in Afghanistan. Protests are expected throughout Japan this weekend as part of international demonstrations against any possible U.S. war against Iraq. (Greg Tyler / S&S)

YOKOTA AIR BASE, Japan &#8212; More than 10,000 people are expected to protest a possible U.S.-led war against Iraq this weekend in cities throughout Japan and at some U.S. military installations.

The demonstrations will coincide with anti-war rallies in the United States and more than 25 other countries.

About 80 people are expected to stage an anti-war protest outside Yokota Air Base on Saturday morning, according to a petition organizers submitted to the Japanese National Police.

Base officials anticipate a peaceful demonstration.

The organizers, in their petition, said they will gather at Fussa Park, about 500 yards from the supply gate, at 9:30 a.m., said 2nd Lt. Thomas Wenz, a Yokota spokesman.

Shortly thereafter, they will head for the supply gate, then march south on the sidewalk along Route 16 to the Fussa gate, before turning west toward the Fussa train station. The march is set to end in Higashi-cho Park.

Organizations, by law, must file a petition with Japanese police before demonstrating in public. Base officials said they did not know which group is leading Saturday&#8217;s protest near Yokota.

The base, meanwhile, will have Security Forces personnel and at least one canine and confrontational management team on standby.

The Office of Special Investigations sent an official e-mail to all Yokota military members earlier in the week announcing Saturday&#8217;s protest and advising people to avoid the area or travel in groups.

Quattrone said Saturday&#8217;s protest is the largest near Yokota since Sept. 11.

Demonstrations have been more common recently at Yokosuka Naval Base, where hundreds of anti-war demonstrators are expected to gather Sunday at 1 p.m. in Verny Park, just outside the main base gates.

Protest organizers say they plan to march in front of both the U.S. Navy base and the neighboring Japanese Maritime Self Defense Forces base.

Base officials are reminding all U.S. personnel, whether military or civilian, to avoid the protests.

The largest anti-war rally is expected Saturday in Tokyo, where more than 30 Japanese nongovernmental organizations will stage a demonstration dubbed &#8220;No More War! No Attack on Iraq.&#8221;

Organizers say about 10,000 people will hold a &#8220;peace parade&#8221; through the Ginza district and a concert at Hibiya Park. The participating NGOs include Amnesty International Japan, the Citizens&#8217; Nuclear Information Center, Greenpeace Japan and Peace Boat.

&#8212; Joe Giordono and Hana Kusumoto contributed to this story.