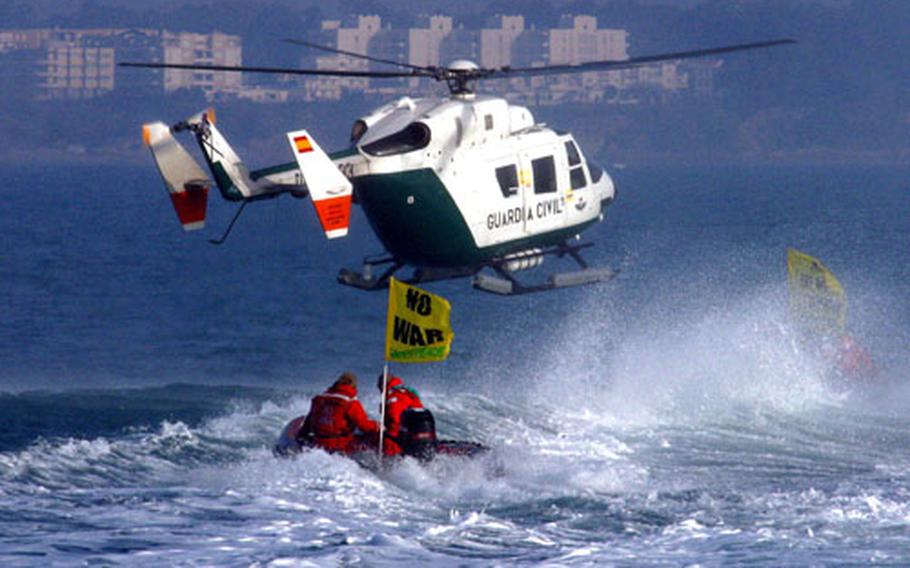 A helicopter from the Civil Guard hovers over two inflatable boats from the Greenpeace ship Rainbow Warrior at the entry of Rota Naval Base on Friday. The Rainbow Warrior was blocking a section of the harbor being used for the military buildup for a possible strike against Iraq. (Courtesy of Greenpeace)

A helicopter from the Civil Guard hovers over two inflatable boats from the Greenpeace ship Rainbow Warrior at the entry of Rota Naval Base on Friday. The Rainbow Warrior was blocking a section of the harbor being used for the military buildup for a possible strike against Iraq. (Courtesy of Greenpeace) 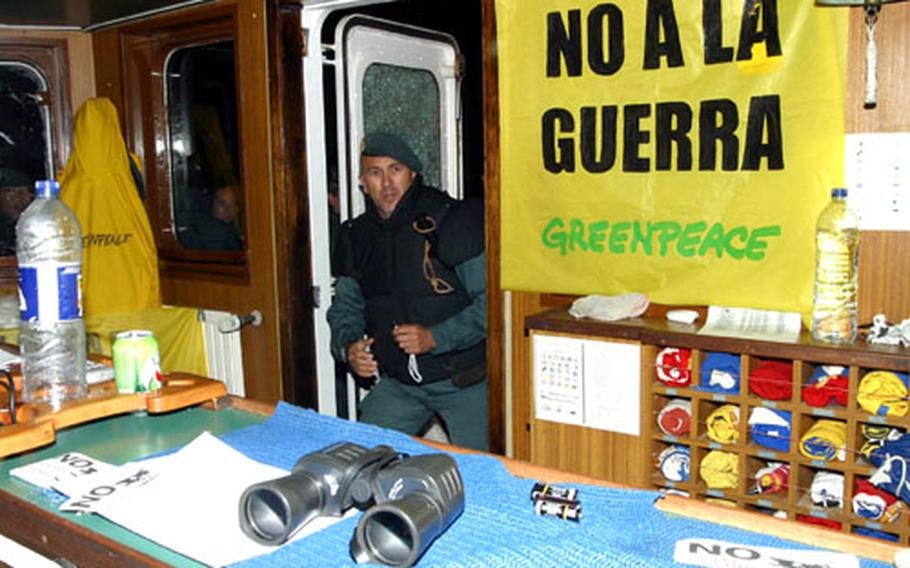 A member of the Spanish Civil Guard enters the bridge of the Rainbow Warrior early Saturday morning after breaking open the door as the Guard forcefully take over the ship as it was blocking the entrance to Rota Naval Base. During the boarding, two crew were injured and three were arrested. (Courtesy of Greenpeace)

NAVAL STATION ROTA, Spain &#8212; A group of anti-war Greenpeace activists will face a Spanish judge after trying to block U.S. military ships from leaving the Navy base port in Rota.

Spanish authorities arrested two of the protesters, including an American, as they tried to chain themselves to a buoy Friday morning near the pier&#8217;s entrance. Later that day, Spain&#8217;s Civil Guard arrested three other activists aboard the group&#8217;s flagship Rainbow Warrior as it remained anchored about 250 yards from the entryway.

Before handcuffing the ship&#8217;s captain, law enforcement officials stormed the 159-foot schooner, took its anchor and towed it back to the port city of Cadiz, where it remained Monday.

The activists, who were released Saturday, are charged with disobedience and resisting arrest. A court date has not been scheduled.

One of the Greenpeace activists taken into custody, Carlos Bravo of Spain, criticized Spanish police, claiming they shattered windows on the ship and injured some of the crew members during the arrests.

He vowed the group would sail again and resume its anti-war tour of ports supporting the U.S. military buildup in the Middle East.

Greenpeace is known for backing environmental-protection initiatives, but is also an outspoken opponent of any war against Iraq. About 250,000 U.S. and British troops are in the Persian Gulf region, poised for a confrontation.

Greenpeace is hoping the anchor will be returned soon so activists can take their ship and anti-war message to Mediterranean ports supporting U.S. military cargo ships.

Greenpeace arrived in Cadiz on March 10 in the Rainbow Warrior. On Thursday, activists in rubber boats chased a U.S. Coast Guard cutter briefly as it left the Navy base pier in Rota before Spanish patrols drove them away.

Base spokesman Lt. Corey Barker said U.S. security officials were not involved in any of the incidents with Greenpeace, but were prepared if Spanish authorities requested help.