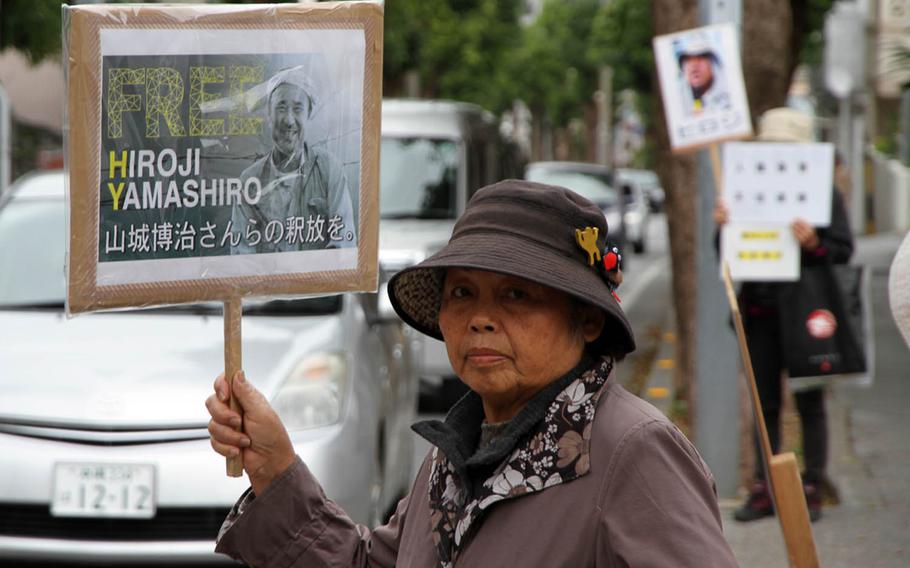 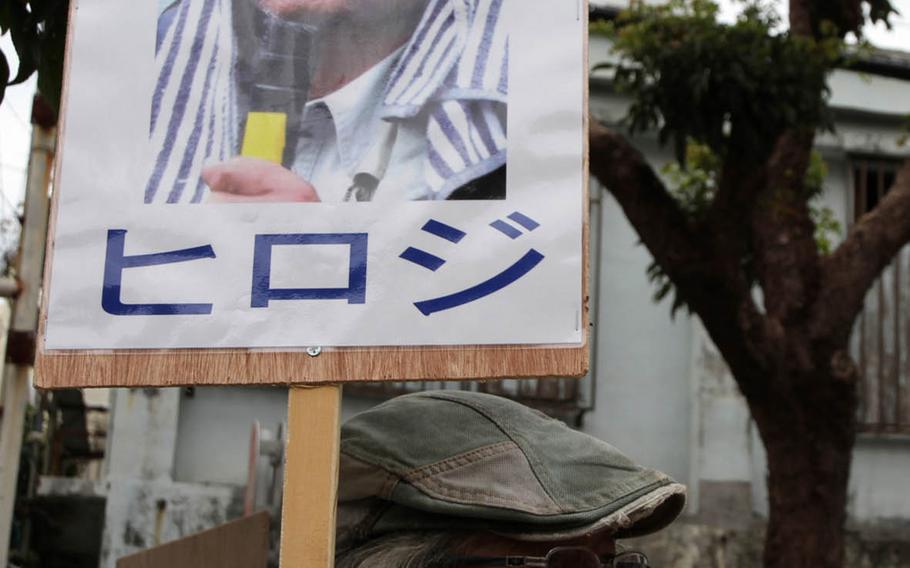 Buy Photo
People gather daily in front of Naha District Court in Okinawa, Japan, to protest the detention of anti-U.S. base protest leader Hiroji Yamashiro, who has been held in solitary confinement without bail since October. (Matthew M. Burke/Stars and Stripes) 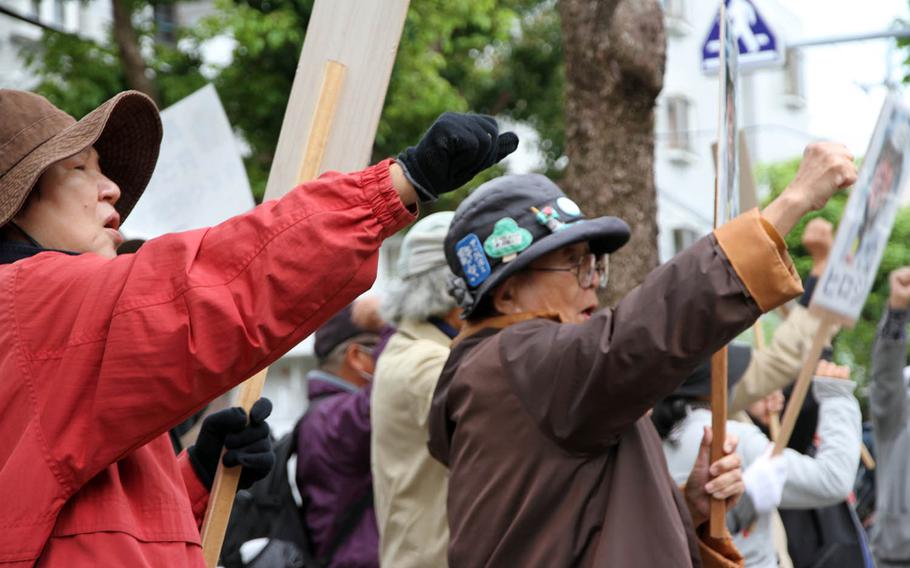 Buy Photo
Dozens of Okinawans gather outside a district courthouse to protest the detention of Hiroji Yamashiro, an anti-U.S. base protest leader held in solitary confinement since mid-October. (Matthew M. Burke/Stars and Stripes) 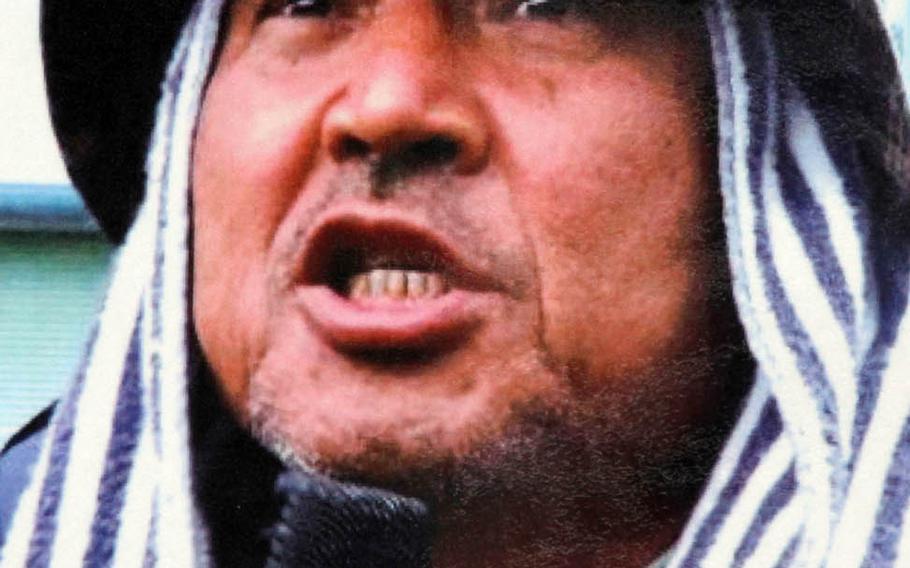 Buy Photo
Dozens of Okinawans gather every weekday morning outside an Okinawa courthouse to protest the detention of Hiroji Yamashiro, an anti-U.S. base protest leader who has been held in solitary confinement since mid-October. (Matthew M. Burke/Stars and Stripes)

CAMP FOSTER, Okinawa — Dozens of Okinawans gather every weekday morning outside an Okinawa courthouse to protest the detention of Hiroji Yamashiro, an anti-U.S. base protest leader who’s been held in solitary confinement since mid-October.

“Release him immediately,” a fellow Okinawa Peace Activity Center member shouted into a microphone last week. “Give Hiroji back to us.”

Yamashiro, 64, chairman of the group opposed to relocating Marine Corps Air Station Futenma within Okinawa, has been accused of a string of protest-related offenses, from cutting barbed wire to obstructing businesses and law enforcement.

The U.S. and Japanese governments consider the base relocation on Okinawa a critical component of U.S. military force realignment in the Asia-Pacific, despite calls from protestors like Yamashiro to move the base off-island.

Moving Futenma out of Okinawa would separate the 31st Marine Expeditionary Unit from its helicopters and aviation assets.

Yamashiro’s supporters say the Japanese government is trying to quell anti-base dissent while making an example out of him. Human-rights groups such as Amnesty International have called for Yamashiro’s immediate release, and there have been demonstrations in his name as far away as New York City.

“Detaining him for as long as five months over such minor offenses is impossible and illegal,” said friend and supporter Isamu Nakasone, a former Okinawa magistrate. “The arrest itself does not meet the requirements mandated by law. It was done following a scenario drawn by the government, targeting him, with an attempt to curtail the protest movements.”

An opening hearing is slated for March 17. Japan’s Ministry of Defense declined to comment on the case.

Yamashiro was taken into custody Oct. 17 on suspicion of vandalism after police said he cut an $18 strand of barbed wire on a perimeter fence at Okinawa’s Northern Training Area while protesting the construction of U.S. military helicopter landing pads.

Three days later — before his detention expired — police added other charges stemming from incidents that they said happened months before. Those include obstructing officers and causing injuries after a scuffle between police and protesters, and the forcible obstruction of business — keeping officers from performing their duties — after Yamashiro was accused of blocking a Camp Schwab construction gate with more than 1,000 concrete blocks.

Along with solitary confinement, Yamashiro has been kept from meeting with his family, according to his lead lawyer, Nozomi Kanetaka. Yamashiro’s wife tried to bring him a heating pad after he complained to his attorneys that he was always cold. Police initially denied that request, but approved it a week later.

Family members have declined to comment for this story.

“Treatment such as this, which inflicts nothing but mental anguish, clearly reflects the government’s attempt to intimidate those who are against the government’s policy [to build a new runway at Henoko that will facilitate Futenma’s move],” said another attorney on his defense team, Tatsushi Yokota.

Yamashiro has been repeatedly denied bail — an issue that went all the way to the Supreme Court of Japan, which ruled against him on Feb. 20.

Prosecutors have said Yamashiro may destroy evidence, though his lawyers say that evidence consists of videotapes that are in government possession.

Nakasone’s group began collecting signatures demanding Yamashiro’s release in late December, and had 41,000 within two weeks. When they stand in front of the courthouse, random passersby stop and shout slogans with them before moving on; cars often honk in support.

“The detention might have gone through correct procedures, but the question is if the charges pressed against him deserve the treatment he is going through,” said University of the Ryukyus law professor Tetsumi Takara. “The intent of the prolonged detention is to keep him away from the protest group to undermine the movement against the Henoko project.

A State Department spokeswomen declined to comment on Yamashiro’s detention.

Yamashiro’s attorneys have called him a “hostage of justice” for refusing to admit to the charges against him, which might have won his release.

They say he’s been exercising in his cell and that his outlook improves with each day that he gets closer to trial.

Some anti-base protesters said their will has been galvanized by Yamashiro’s incarceration.

“His arrest certainly gave the impression to the public that if you do something that goes against government policy, you will be immediately arrested,” said Takashi Kishimoto, a fellow member of the Okinawa Peace Activity Center. “I would be lying if I said I am not apprehensive, but on the other hand, our determination grew stronger to continue to fight for the cause we believe in.”