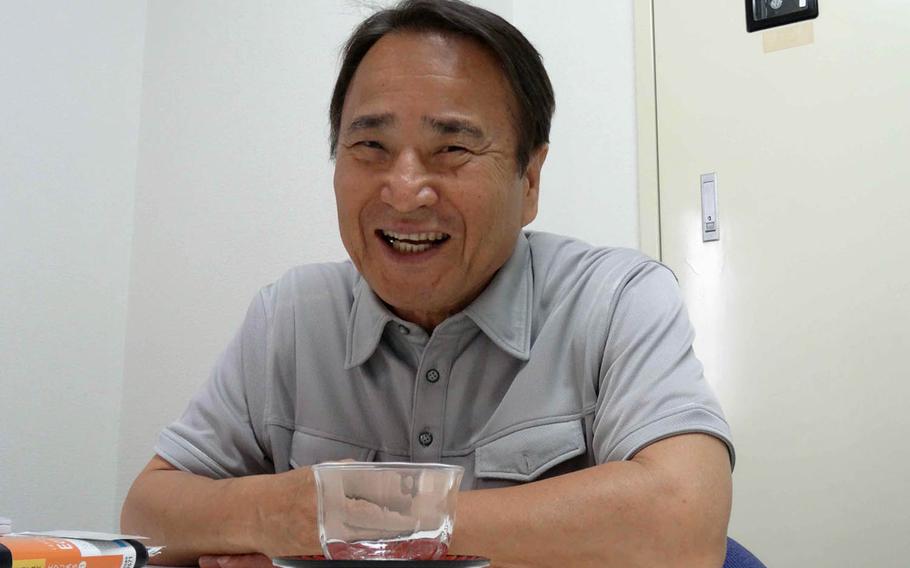 Okinawan anti-U.S. base protest leader Hiroji Yamashiro, 64, talks to Stars and Stripes at his lawyer's office in Naha, Okinawa, May 24, 2017. (Matthew M. Burke/Stars and Stripes)

Okinawan anti-U.S. base protest leader Hiroji Yamashiro, 64, talks to Stars and Stripes at his lawyer's office in Naha, Okinawa, May 24, 2017. (Matthew M. Burke/Stars and Stripes) 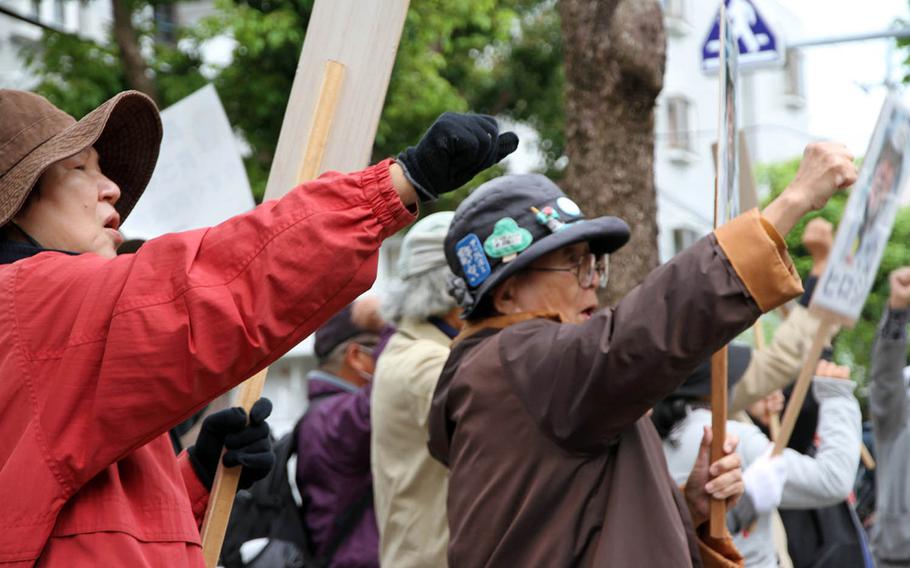 Dozens of Okinawans gather outside a district courthouse in March to protest the detention of Hiroji Yamashiro, an anti-U.S. base protest leader being held in solitary confinement. (Matthew M. Burke/Stars and Stripes)

CAMP FOSTER, Okinawa — Protesters chanting and shouting, obstructing traffic, holding signs calling Marines “terrorists” and “murderers” — this is the daily reality for servicemembers stationed at Camp Schwab and at other bases on Okinawa.

The groups are generally small, from a few dozen to several hundred, but can swell into the thousands after a crime perpetrated by an American servicemember. These protests are noticeably peaceful and have popular support, but some participants have gotten carried away, swearing at American children, striking cars or pushing and shoving passersby. They are always mirrored by a large number of Japanese police, who often make dramatic arrests.

One of the movement’s leaders, Hiroji Yamashiro, 64, has become a symbol of the resistance. The warm and soft-spoken man with a disarming smile was released from Japanese prison in March after a five-month incarceration related to his protest activities.

Since his release, Yamashiro has been touring Japan to talk about the protests. He spoke before the United Nations this month about the movement and how the Japanese government has cracked down on dissent.

“It is often misunderstood that our activities are anti-American, but Americans have always been an integral part of the life of Okinawan people,” Yamashiro told Stars and Stripes at his attorney’s office in Naha on May 24.

Yamashiro said his father worked on a U.S. military base when he was growing up and would often invite Americans to his house. He would delight in watching them sit awkwardly on tatami mats on the floor while they drank beer. Some became close friends of the family.

“Many of them had gone to Vietnam,” Yamashiro said softly. “We were saddened every time we heard about one of their deaths. My father still has framed photos of them on his living room wall.”

Yamashiro was born in 1952, the second son of a farming family living in Uruma, then called Gushikawa.

“As I grew up, I heard many horrible war stories,” Yamashiro said. “It was those days when people struggled to survive in the post-war chaos. Our home was a shack that was made of military surplus parachute material.”

It was out of those stories of the horrors of war that a protest leader was born. Throughout Yamashiro’s childhood and teenage years, the Vietnam War raged, and Okinawa was a hub for U.S. troops.

“On Okinawa, traffic accidents, murders, rapes and various kinds of crimes had been committed by U.S. servicemembers,” he said.

In 1968, a B-52 crashed in his neighborhood, Yamashiro said. He was traumatized by thoughts of it carrying nuclear weapons.

In 1970, a classmate was attacked in an attempted rape, he said. She escaped, but was stabbed multiple times.

“I was enraged,” he said. “With a microphone in my hand, I formed a student protest group and walked to a communication site where the culprit was assigned, and we staged a protest rally outside the fence.”

His efforts continued in 1971 because reversion had not been what Okinawans had hoped for, he said. He blockaded his high school campus and was expelled.

After graduating from college, Yamashiro worked for the Okinawa prefectural government as an accountant. He also served as deputy chair of the Okinawa chapter of the All Japan Prefectural and Municipal Workers’ Union. He joined the Okinawa Peace Activity Center in 2000 and quickly became an indispensable leader. Yamashiro and the protesters are against the relocation of Marine Corps Air Station Futenma to Camp Schwab for a number of reasons. They feel that the beefed-up base, with its state-of-the-art airfield, will become a likely target for adversaries should war break out in the region.

“Building up military presence on Okinawa will only fan the arms race with China,” he said. “With the existing military strength, the U.S. and China should be able to discuss a status quo. I have confidence that the United States and China can do it.”

Ideally, the protesters want to see Okinawa become a military-free island, with no U.S. or Japan Self-Defense Force troops. However, Yamashiro concedes this is unlikely to happen, so they are fighting against anything they view as an expansion.

“I do not disagree with the need for deterrence power, but the deterrence power should never be escalated to the using of force,” he said. “I feel in my bones that war is drawing near, and the thought that this island would become a battlefield again chills my blood.”

The protesters are also concerned about the environment and see the new runway being built into Oura Bay as an ecological disaster. Yamashiro and the protesters have garnered support from an unlikely place, Veterans for Peace, based in St. Louis.

Veterans For Peace is made up of veterans and active-duty U.S. military whose mission is to abolish war and build a culture of peace, according Tarak Kauff, a VFP national board member and veteran of the 101st Airborne from 1959 to 1962. Kauff and other VFP members have participated in several delegation trips to the island in support of the protesters.

“The popular people’s movement in Okinawa for independence, real democracy and an end to the U.S. military occupation of Okinawa resonates with many U.S. military veterans and active-duty military, especially those in VFP because we have seen the futility and horror of U.S. wars and militarism,” Kauff said. “What kind of democracy are we defending when 70 to 80 percent of the people here do not want U.S. bases and almost 90 percent, including the governor, oppose the environmental destruction in Henoko and Oura Bay.”

Kauff said that VFP found a partner in Yamashiro.

Yamashiro said that the central government in Tokyo has applied enormous pressure on Okinawa and its people. He plans to stand and fight as long as he can.

The protests are here to stay, Yamashiro said, but that doesn’t mean there has to be an adversarial relationship between Americans and the Okinawan people.

“I firmly believe that as long as we have close communication between people in the military and the people of Okinawa, we can understand each other,” he said. “After all, we all seek peace and a world without war.”