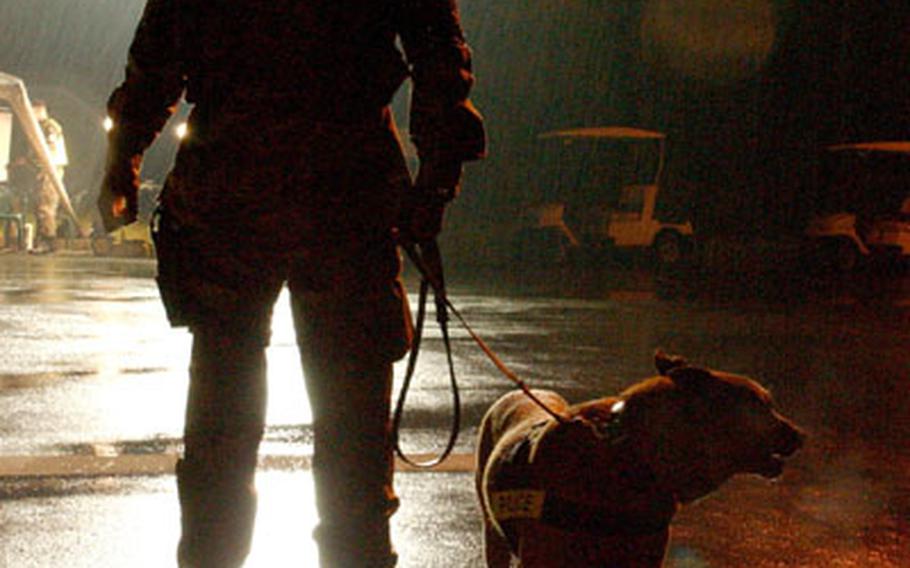 A U.S. Army Japan military police officer and his K-9 partner conduct a patrol in the pouring rain during an anti-terrorism exercise Thursday at Camp Zama, Japan. (Matthis Chiroux / Courtesy of U.S. Army)

A U.S. Army Japan military police officer and his K-9 partner conduct a patrol in the pouring rain during an anti-terrorism exercise Thursday at Camp Zama, Japan. (Matthis Chiroux / Courtesy of U.S. Army) 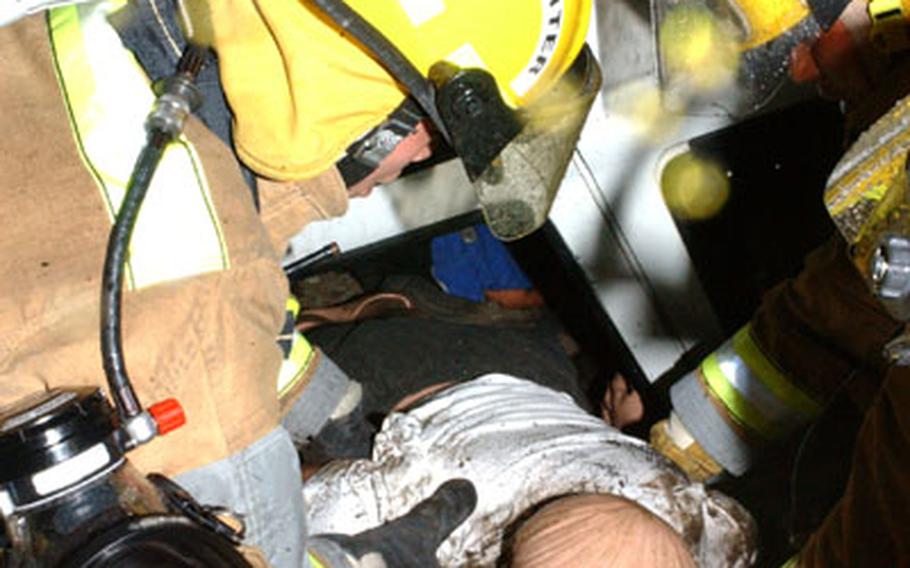 CAMP ZAMA, Japan &#8212; Under a driving rain, units across Camp Zama fought fires, terrorists and deadly explosives as part of one of the largest anti-terror exercises the installation has performed.

The scenario had terrorists attacking residential areas, causing mass casualties and later holing up with hostages. The exercise tested more than a dozen groups including the Japan Ground Self-Defense Force unit based at Zama and the U.S. Navy from Yokosuka Naval Base.

Under Army directives, the base must hold annual anti-terror drills. &#8220;In some way, shape or form, it will affect everybody on this installation,&#8221; said Chris White, senior anti-terrorism analyst who helped plan the exercise.

It had five phases. First, firefighters extinguished a car bomb blaze and evacuated casualties from a building. Medical personnel managed mass &#8220;casualties&#8221; with lifelike injuries. Then a car bomb was found but did not explode, requiring an Explosive Ordnance Disposal team to defuse it. Next, terrorists escaped and took hostages, leading to intervention by the post&#8217;s Special Reaction Team. Hours later, a suspicious anthrax-like substance was discovered at a school.

The exercise also served to raise overall awareness among soldiers, families and civilians, officials said &#8212; even those not directly taking part. &#8220;If anything, we&#8217;ll have gotten people to think about it,&#8221; said Col. Garland Williams, U.S. Army Garrison-Japan commander.

Days before the exercise, mock terrorists surveyed and assessed the post, White said, to test how well people notice reconnaissance activities, a precursor to most attacks.

&#8220;We&#8217;ve never done this before,&#8221; said observer-evaluator Sgt. Shamell Benta, medical training noncommissioned officer-in-charge for U.S. Medical Department Activity Japan. &#8220;You decrease the chance of that person causing bodily harm to themselves or others. In reality, 10 percent of mass [casualties] are psych patients.&#8221;

The exercise was the first with the Army that let the Japan Ground Self-Defense Force&#8217;s 4th Engineer Group rehearse its actual job &#8220;rather than augmenting a security force&#8221; as in the past, Williams said. Group members rescued injured victims from a car and moved rubble to clear traffic. &#8220;We have a specific role as an engineer group and there is a great meaning&#8221; in playing that role in the exercise, said the group&#8217;s commander, Col. Kazuhiro Watanabe.

The two nations are able to train together after a 2004 agreement to mutually defend the post.

Each group taking part in the exercise sent an observer who also served as an evaluator. The observers are to return to their units to discuss improvements; the entire installation also will examine what could be improved, Williams said.