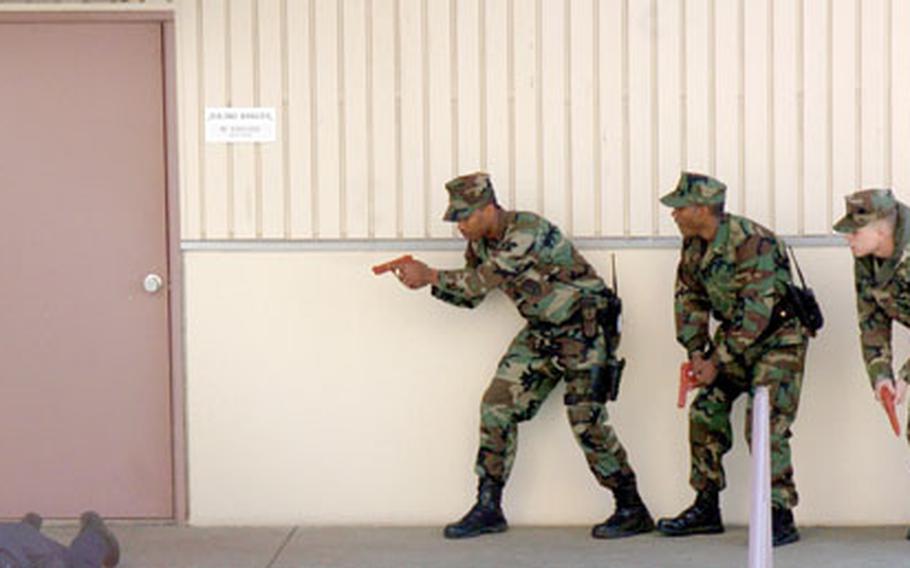 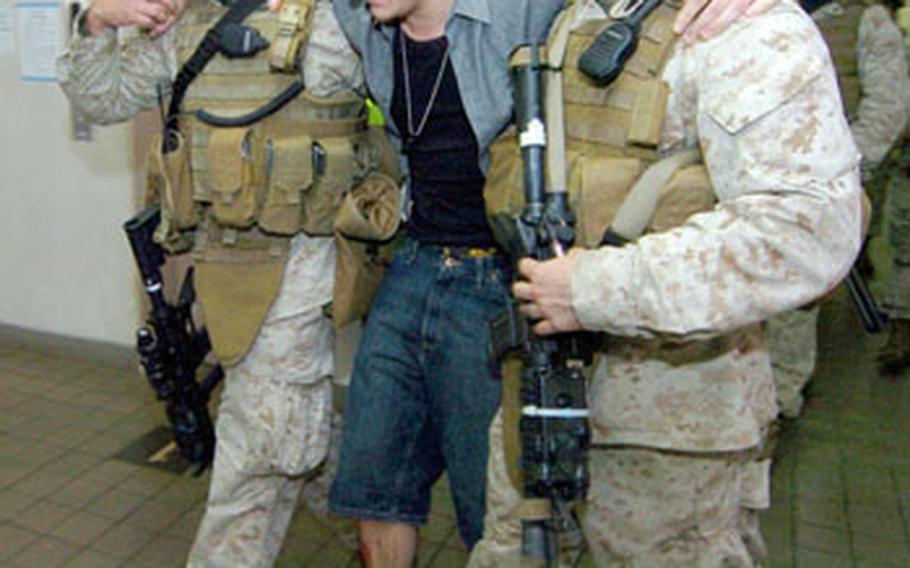 Atsugi base security personnel positioned themselves outside a warehouse after blocking the road between it and a residential building.

A man lay motionless in front of a warehouse door.

Behind the door, a terrorist was calculating his next move.

"We have your building surrounded. State your demands," a Naval Air Facility Atsugi, Japan, security negotiator said through a megaphone.

Japanese residents poked their heads out of windows and watched the scene from their patios behind the fenced border.

Atsugi officials quickly sent people over to assure them it was only a drill.

"Those are some things that happen in the real world. We just roll with it and flex until we get what we need out of it," said Lt. Deanna Christensen, Atsugi&#8217;s operational training and readiness officer, of Thursday&#8217;s anti-terrorism exercise.

The drill brought together members of the Naval Criminal Investigative Service unit from Yokosuka Naval Base, Atsugi-based medical and security personnel, and the Marine Fleet Anti-terrorism Security Team from Yokosuka, to name a few.

The object was to force Navy and Marine elements to work together to stave off a terrorist threat while staying true to their own specific functions, officials said.

Christensen said the base participates in similar exercises at least four times a year.

On Thursday, base security coordinated with the Marine FAST team to evacuate residents of a building that was targeted.

They later used the same coordination when the FAST team stormed the warehouse to remove the terrorist.

Security dispatch was forced to deal with these and other scenarios, including one involving around 20 evacuees, played by Zama American High School drama students, who needed refuge for themselves and their pets.

Any missteps that occurred Thursday were to be viewed positively, Christensen said, since they represent improvements that could be made to the system.

"People will train and train and train, but unless they know what they&#8217;re evaluating, it&#8217;s for nothing," she said. "Lessons learned are always what training is about."

Around 15 Fleet and Family Support Center workers adjusted their schedules so they could set up refuge for the displaced people at Club Trilogy on base.

They checked in the evacuees, assessed their needs and provided counseling services for those dealing with trauma.

The FAST team was led by Capt. Brandon Turner, who said his team frequently practices simulated terrorist crises on its own.

He said Thursday&#8217;s exercise gave them valuable experience coordinating with units from a different base with help from civilian and military role players.

"With this, we have to coordinate with outside units that have to learn our [standard operating procedures]; and the same, we have to work with theirs," Turner said.

He added that in the exercise, just like in real life, the team doesn&#8217;t get a chance to coordinate its actions in advance.

"Truly, for the exercise itself, all the coordination occurs on the inside, just like it would in real life," he said.

"We&#8217;d get the call that we have a mission, and once we show up, we have to start the coordination there and execute the mission.

"That puts in that confusion that we can&#8217;t get anywhere else."