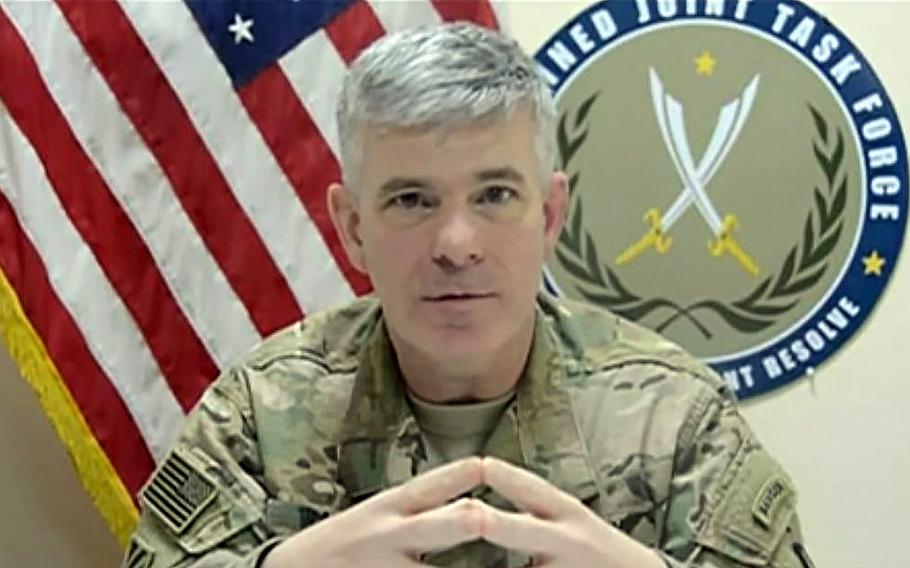 A video screen grab shows Army Col. Steve Warren at a Pentagon briefing on Tuesday, Dec. 29, 2015, as he gave an update from Baghdad on the challenges faced by Iraqi security forces as they fight Islamic State militants. (Defense Department)

WASHINGTON — An Islamic State group leader with alleged ties to the terror attacks in Paris last month was among 10 ranking members of the militant group killed in recent weeks by U.S.-led coalition airstrikes.

The Operation Inherent Resolve coalition killed Charaffe al Mouadan on Dec. 24 in an unspecified location in Syria, said Army Col. Steve Warren, a spokesman for the coalition. Mouadan was directly linked with Abdel Hamid Abaaoud, the suspected ringleader in the Nov. 13 terror attacks in Paris that left 130 people dead, Warren said. Abaaoud was later killed during a police raid in a Paris suburb.

“We will continue to hunt (Islamic State group) leaders who are working to recruit, plan and inspire attacks against the United States of America and our allies,” Warren told reporters Tuesday at the Pentagon during a video briefing from Baghdad.

The colonel would not say whether there was evidence Mouadan or others had designed specific plans to target the United States. However, Warren did say they aspired to eventually attack U.S. and European countries. Removing them from the Islamic State’s chain of command, Warren added, would help degrade the organization’s ability to do that.

“It’s important that people understand that as long as those external attack planners are operating, the United States military will hunt them, and we will kill them,” he said. “All of these terrorists had eventual designs on attacking the United States. Let’s be clear about that, that’s what they want to do.”

Killing Islamic State leaders has also helped the coalition and the indigenous fighters it supports to succeed in recent battles in Iraq and Syria, Warren said. The militants in recent months have been ousted from several key parts of both countries including Sinjar, Beiji, and Ramadi in Iraq and al Hawl in Syria.