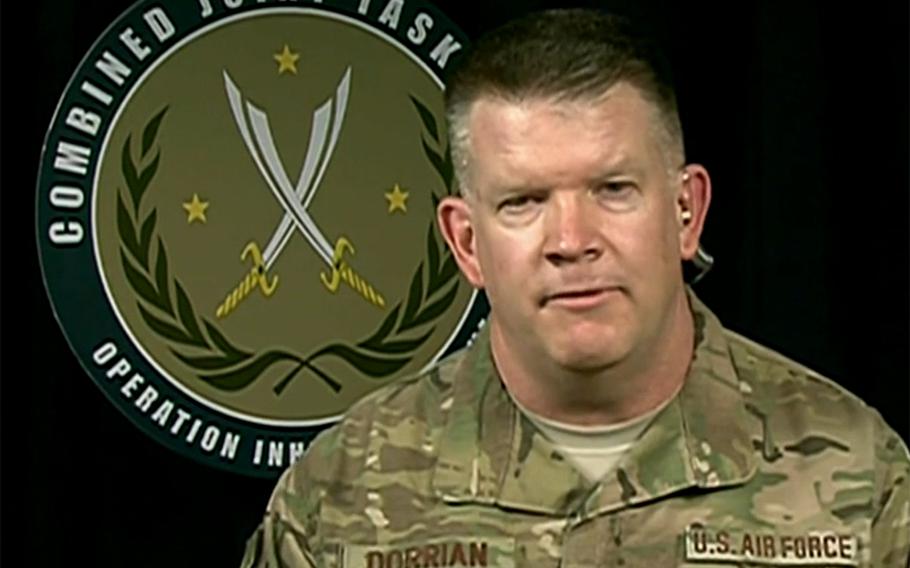 WASHINGTON – The U.S.-led anti-Islamic State group coalition struck the militants near al-Bab in Syria in recent days, backing a Turkish-led offensive from which American officials had initially withheld their support, a top coalition spokesman said Tuesday.

Four coalition airstrikes Monday and Tuesday destroyed Islamic State group tactical units, an armored personnel carrier and an excavator near the key northern Syrian town where Turkish troops and their partnered-Syrian rebel forces have faced stiff resistance, said U.S. Air Force Col. John Dorrian, the Baghdad-based spokesman for the Operation Inherent Resolve coalition. The strikes were the first the coalition has provided in support of its NATO ally Turkey, since the operation was first announced in September.

The coalition had backed a Turkish offensive earlier last year that cleared Islamic State group fighters from land across Syria’s northern border with Turkey, but with tensions mounting between the U.S.-backed Syrian Democratic Forces and Turkey in recent months, the coalition initially declined to back the Turkish offensive, which U.S. officials described as an independent military operation. Turkey views the bulk of the SDF, Kurdish fighters known as YPG, as a terrorist organization, alleging it is closely-tied to the Kurdish PKK, a group the United States has designated terrorists.

Russia, which has mostly backed Syrian President Bashar Assad, has provided some air support to the Turkish campaign in the past month, but the offensive has not been able to wrest al-Bab from the Islamic State group. Several dozen Turkish soldiers and their allied local fighters have been killed in the clashes.

In recent weeks, Turkey and the OIR coalition appear to have ironed out some of their differences. The coalition began flying regular intelligence, surveillance and reconnaissance flights over al-Bab last month. On Tuesday, Dorrian said he expected the coalition to provide more airstrikes in support of the Turkish operation.

“We do expect to continue doing these types of strikes in the days ahead,” he said.

Dorrian said the coalition developed the targets alongside Turkish commanders, who are working together in joint headquarters. He said he expected the Turks to eventually defeat the Islamic State group in al-Bab.

“There’s going to be tough fighting there,” he said. “We do believe that our [Turkish] partners, our allies are more than a match for them. They will be successful against them, but it’s not surprising that it’s a tough fight.”

What remains unclear is what role, if any, the Turkish military and its partners will have on the eventual assault to re-take the Islamic State group’s de facto capital of Raqqa, some 80 miles southeast of al-Bab.

The Syrian Democratic Forces have retaken more than 1,200 square miles of territory from the Islamic State group near Raqqa since early November, moving to within miles of the city’s boundaries during an operation designed to encircle it for an eventual attack.

Turkish President Recep Tayyip Erdogan has said his troops will be involved in that attack, but has decried the involvement of the YPG forces as a threat to his nation’s security.

It is unclear how or if President-elect Donald Trump, who will be sworn into the United States’ highest office on Friday, will alter American policy toward the fight against the Islamic State group in Syria. Trump has repeatedly criticized the Obama administration’s handling of the war, but he has offered few specifics about his own plans.

His pick to head the Pentagon, retired Marine Gen. James Mattis, told lawmakers last week he believes the “strategy needs to be reviewed and perhaps energized on a more aggressive timeline.”