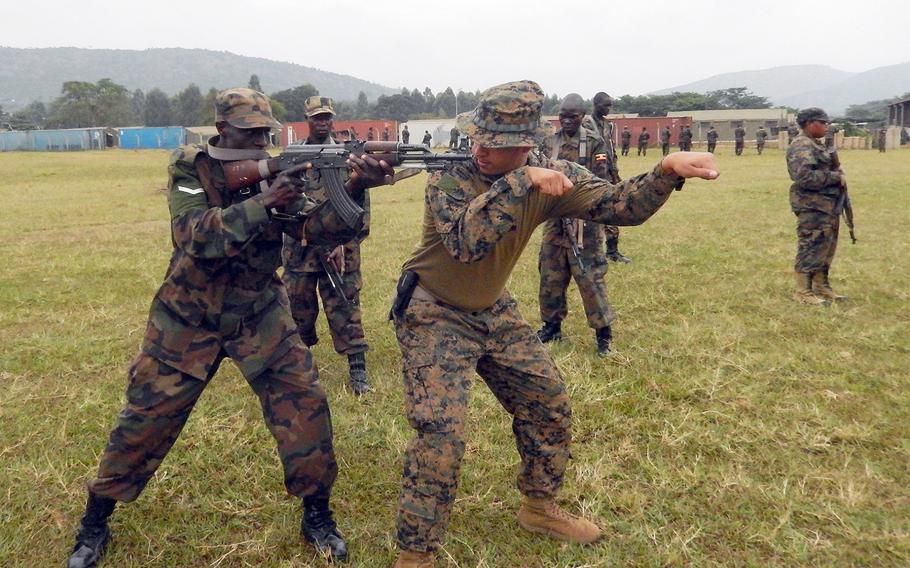 STUTTGART, Germany — As the U.S. reviews its partnership with Uganda after the African nation’s adoption of sweeping anti-gay legislation, policymakers are now in the difficult position of trying to support the Obama administration’s tough talk while maintaining an alliance with a key player in U.S. counterterrorism efforts around the Horn of Africa, experts say.

Secretary of State John Kerry sharply criticized Ugandan officials on Monday because of the new law.

“This is a tragic day for Uganda and for all who care about the cause of human rights,” he said. “Ultimately, the only answer is repeal of this law. As President Obama stated, this legislation is not just morally wrong, it complicates a valued relationship.”

Kerry said the U.S. has begun an internal review “to ensure that all dimensions of our engagement, including assistance programs, uphold our anti-discrimination policies and principles and reflect our values.”

Uganda has been a key U.S. partner in the region. Areas of collaboration include U.S. training for Ugandan troops to conduct missions in Somalia, where the Islamic militant group al-Shabab controlled large swaths of the country at one time. Shabab has since been pushed out of key strongholds in Somalia, largely thanks to Ugandan troops and other African Union forces.

The Ugandan military has also been in the lead for security operations in the Central African Republic, working alongside U.S. special operations forces in the hunt for the Lord’s Resistance Army, a rebel group led by Joseph Kony.

With the relationship now under review, it is unclear how far the U.S. will go to punish Uganda for passing legislation that criminalizes homosexuality and even threaten imprisonment in certain cases.

“Currently, there are no plans to cancel ongoing or planned engagement with Uganda,” said Tom Saunders, an Africa Command spokesman, who referred questions about future policy decisions to the State Department.

Will Stevens, a State Department spokesman, said: ”We are conducting a review of our relationship with Uganda now, but are not in a position to speculate on what specific actions we may or may not take.”

But downgrading cooperation with Uganda’s military would be a way to send a signal to the leadership in the country, said J. Peter Pham, director of the Atlantic Council’s Africa Center. However, he said, the Obama administration should avoid cutting humanitarian aid and development assistance.

“The Obama administration has no choice but to take some concrete action, not only because it would be the right thing to do from the ethical and public-health-policy points of view, but because U.S. credibility is on the line,” Pham said in an email.

For several years, Ugandan President Yoweri Museveni has ignored U.S. concerns on a number of issues, Pham said, including treatment of political opponents after peaceful protests over the economy in 2011 and the presence of Ugandan troops in South Sudan.

“Military assistance is the one area where the U.S. has options,” Pham said. “(T)he Ugandan People’s Defence Force remains one of the few bastions of professionalism in the country, and its leadership is about the only check on Museveni and his ambitions to impose his son as a successor; hence, a shot across the UPDF’s bow might get some attention from those best positioned to get the president’s attention.”

Some experts, however, say that military ties are unlikely to be cut.

Given the role the Ugandan military plays in promoting regional stability, dramatic cuts in aid should be avoided, according to some observers.

“I would expect the State Department — which since 2009 has made LGBT (lesbian, gay, bisexual and transgender) rights a priority in bilateral relations — is trying to find alternate ways to pressure Uganda and express its displeasure,” wrote Mark Leon Goldberg, managing editor of the United Nations Foundation-sponsored UN Dispatch website in a Monday posting called “Why the USA Can’t Just Cut Aid to Uganda.”

There are about 80 countries around the world that have laws criminalizing homosexuality. These are concentrated in Africa, the Mideast and Asia, according to several watchdog groups. The U.S. maintains alliances with many of those countries, including Afghanistan, Saudi Arabia, Algeria and Nigeria.