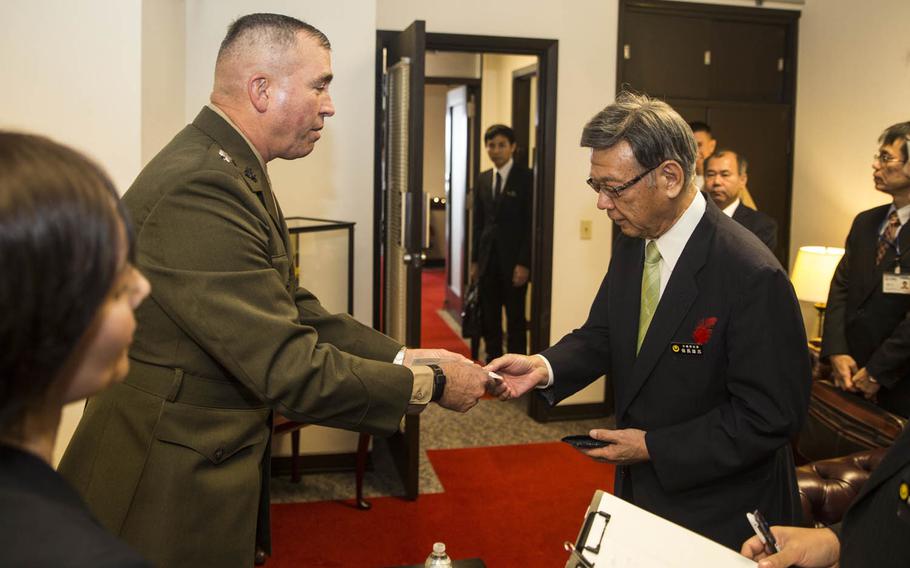 In the first assembly election since Onaga took office in 2014, the ruling coalition that supports him — including the Social Democratic, Communist and Social Mass parties — bolstered its presence, winning 27 of 48 seats, an increase of four, in Sunday’s vote. The opposition, the majority of which is the Liberal Democratic Party, won 14 seats, while neutral parties got six.

Calling it a landslide victory, Onaga expressed confidence in his anti-base stance, stressing his resolve to block the planned construction of a military runway at Camp Schwab in northeast Okinawa.

“The election shows that voters understand and support my effort” to stop the project, Onaga told reporters shortly after returns came in.

The runway served as a focal point for the election. It would allow flight operations to shift from Marine Corps Air Station Futenma in heavily populated Ginowan City to the island’s remote north.

Thirty-one of the election winners opposed the construction, which has been suspended since March when Okinawa and the Tokyo central government agreed to re-enter negotiations after court-led arbitration. Legal battles are expected to resume sometime this month.

The vote followed a spate of high-profile incidents involving personnel connected to the U.S. military.

The assembly unanimously adopted a nonbinding protest resolution in late May, demanding that all Marines leave Okinawa after the arrest of Kenneth Franklin Gadson, a U.S. civilian worker at Kadena Air Base, in the death of 20-year-old Rina Shimabukuro. She had been missing about a month when her body was found in a wooded area.

In addition, a U.S. sailor assigned to Camp Schwab pleaded guilty on May 27 to raping an intoxicated Japanese woman at a Naha hotel, and another sailor was arrested on suspicion of driving drunk after crashing into two cars while driving the wrong way on an Okinawa highway the night before the vote.