Anthrax shots are back at Pacific bases 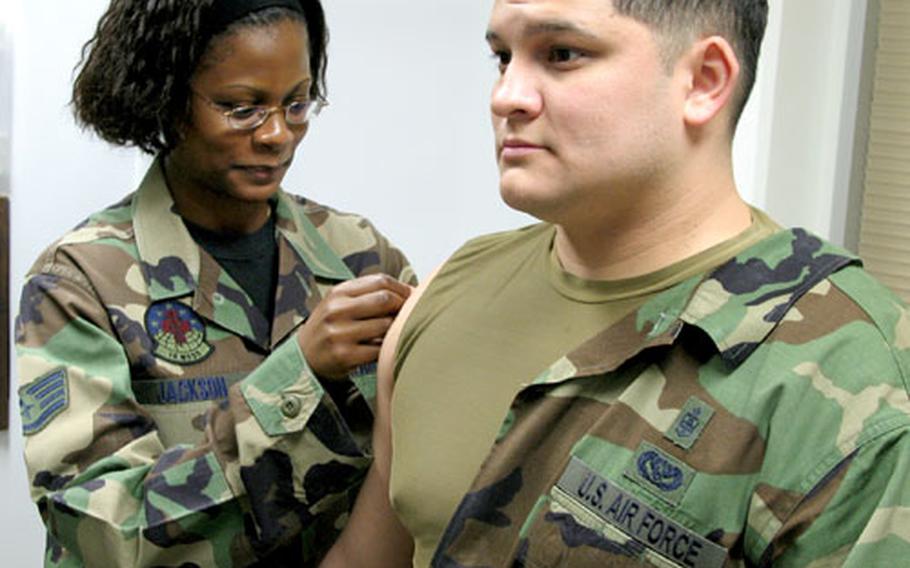 YOKOSUKA NAVAL BASE, Japan &#8212; As of Monday, all four U.S. military branches in the Pacific had resumed mandatory anthrax vaccinations for selected servicemembers deploying to &#8220;high-threat&#8221; areas in the Middle East and the Korean peninsula.

The vaccination mandate affects thousands of servicemembers across the Pacific after two years of the shots being voluntary.

Many sailors at Yokosuka Naval Base hadn&#8217;t heard about the Navy&#8217;s recently announced Anthrax Vaccination Immunization Program, or AVIP, which requires vaccination for 6,640 sailors in the forward-deployed naval forces.

Crews aboard the aircraft carrier and its air wing, as well as servicemembers aboard the amphibious assault ship USS Essex, guided-missile cruiser USS Shiloh and guided-missile destroyer USS Curtis Wilbur, are slated for mandatory anthrax vaccination.

Specifics on how and when the vaccinations will start are still being determined, U.S. 7th Fleet spokesman Lt. Steve Curry said in an e-mail.

Once that&#8217;s done, &#8220;every sailor who is part of the mandatory vaccination program will receive comprehensive information on the vaccine,&#8221; Curry said.

The Marine Corps instruction, released Monday, calls for mandatory shots for an unspecified number of Marines deploying to Central Command and those assigned or designated as early deployers &#8212; troops who would arrive within 20 days of the start of the flow of forces during a conflict &#8212; to the Korean peninsula.

Airmen at Kadena Air Base in Okinawa soon will start receiving the mandatory vaccine, and the medical clinic expects to immunize 1,000 airmen a year, according to 18th Wing Public Affairs.

Misawa Air Base and Air Force bases in South Korea have started giving shots, as the Air Force and Army issued their policies last month. Officials at Yokota Air Base, Camp Zama, and Camp Fuji did not respond to queries about their vaccination plans.

The vaccine is also mandatory for Defense Department civilian employees deemed &#8220;emergency essential&#8221; or &#8220;mission essential&#8221; government contractors, but vaccination has to be spelled out in their contracts.

The vaccine, called Anthrax Vaccine Absorbed, is given as a six-shot series over an 18-month period. Each command will administer and track the shots through an AVIP registry agreement.

The hospital will be responsible for the voluntary part of the directive, which applies to DOD civilians, family and nonspecified active-duty personnel who started the series previously and want to finish it. Christensen said she is not expecting a big rush.

Military anthrax vaccinations began in 1998, but the program was halted in 2004 after a federal judge ruled that the Food and Drug Administration made mistakes in determining the vaccine was safe.

The judge allowed voluntary vaccinations to resume in 2005, but only 50 percent of servicemembers in high-threat areas volunteered for the vaccine, according to the DOD.

That put servicemembers &#8220;at risk, jeopardized unit effectiveness and degraded medical readiness,&#8221; according to a statement from the Office of the Secretary of Defense.

The Department of Defense resumed the mandatory vaccinations last year for U.S. troops and specified civilians serving in CENTCOM and on the Korean peninsula.

Although Seaman Rachel Lux&#8217;s ship, the Yokosuka-based USS Mustin, is not on the mandatory list, she has heard things about the side effects of the vaccine that would cause her to think twice before taking the shots, she said.

Stars and Stripes reporters David Allen and Jeff Schogol contributed to this story.