Anthony Quinn: 'It's like playing baseball in the dark' 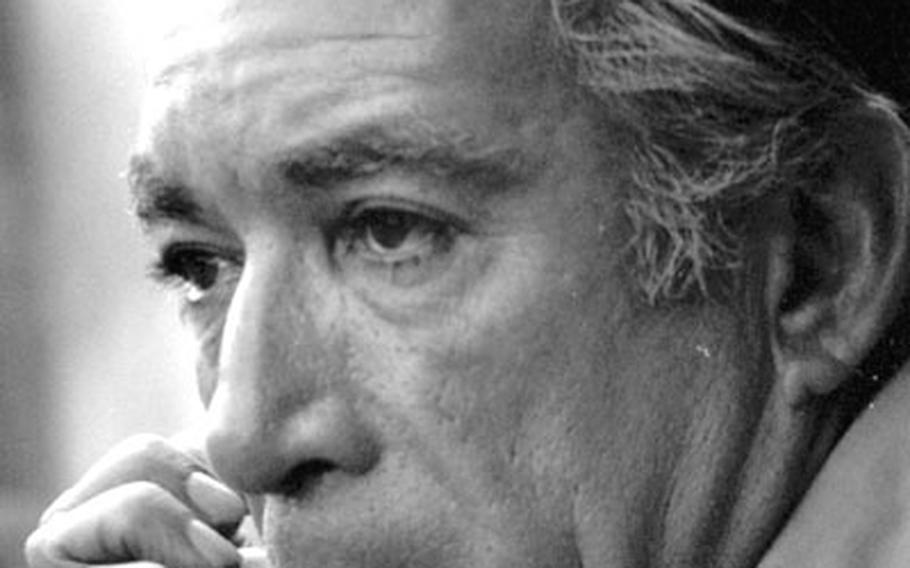 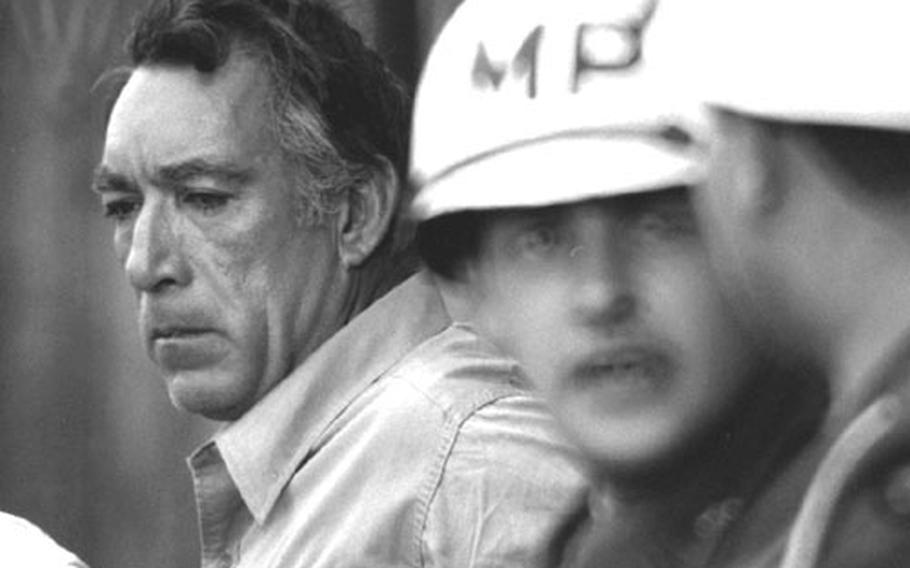 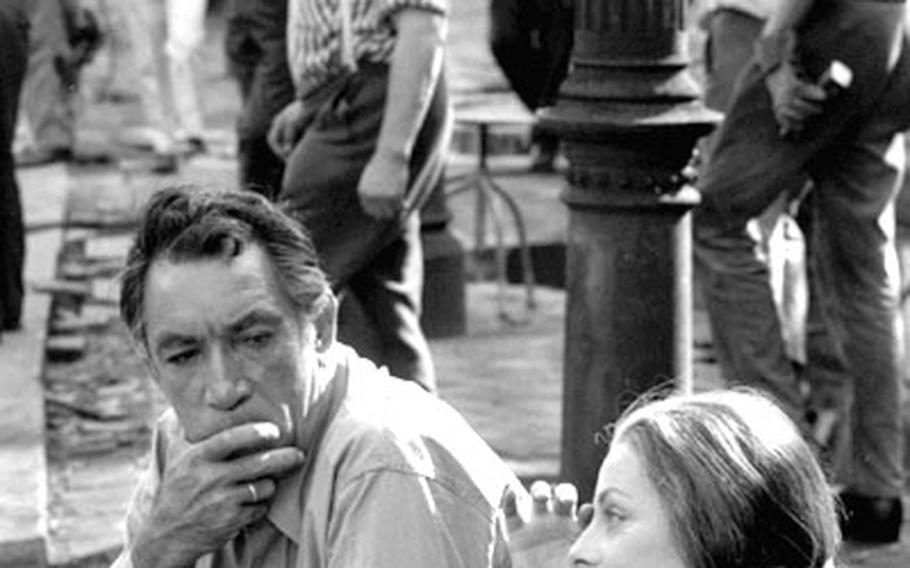 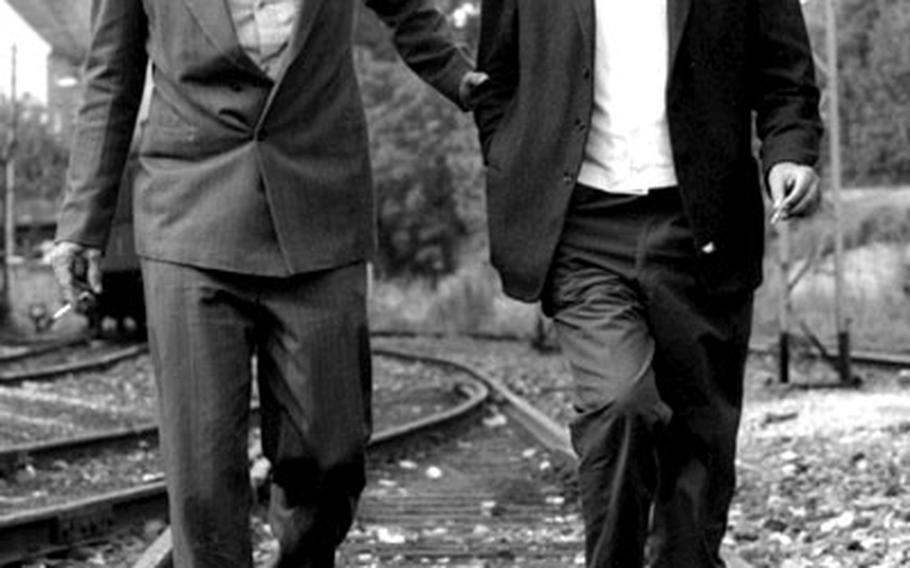 ANTHONY Quinn, in a battered and grimy blue suit and dirty white shirt without tie, sat quietly, withdrawn from the chaos about him on the 'set of "The 25th Hour," an MGM Carlo Ponti film being shot in part in Munich's abandoned Isartal Bahnhof.

Quinn, who portrays a Rumanian peasant buffeted by forces beyond his control in World War II, was building up to the final scene in the movie where he is united with his wife and family after six years of separation.

"Talk to him later," said the American press agent for the French-Italian-U.S. production. "I don't think he wants to talk to anyone right now." A crowd of extras in tattered clothing, carrying brown-paper-wrapped bundles and battered suitcases, milled about, giving the decaying train station an all-too-realistic air of the grim days of the immediate postwar; they were, in contrast to most crowds of extras, solemn and subdued.

WE WALKED across railroad tracks with a lick of fresh silver paint on top ("Makes them look used," said the publicity man) past a quietly puffing steam locomotive and sat down on a grassy patch next to Jack Gaffney, a 45-year-old Scot who for nine years has been Quinn's friend, stand-in, stunt man and confidant.

"I like to think of us as a two-man team," said Gaffney in a burred, rumbling voice. "I sort of just keep an eye on him while he's working, keep pests away and just help out. Not too much else for me to do on a picture like this; not much action like in 'The Guns of Navarone.' We split up and kept two units busy for that one."

Gaffney laid back on the grass and relaxed. "Do a lot of traveling with Tony," he continued. "Let's see, I joined him when he was making 'The Savage Innocents' in Britain. Then we went to Greece, Italy, Jordan, Spain, Yugoslavia, Crete, Jamaica, back to the U.K., Spain again, Miami — Florida, that is — and then to Yugoslavia and Hungary for this one."

The bronzed former full-time stunt man held up a leg. "Broke that while we were making 'The Centurions.' Was out for six weeks, stayed at Tony's place on Rhodes. Longest rest in years."

How was it making a movie in Yugoslavia and Hungary? Any funny things happen?

"Nothing very funny at all happens in those countries these clays," said Gaffney laconically.

THEN, as always happens on a movie set, the confusion suddenly disappeared and French director Henri Verneuil in pleasantly accented English (no matter how bad the actor's English is, Verneuil insists they speak it for the shooting; if it is too accented, it will be dubbed later) called for places. Giant arc lights flared into incandescence, the blackboard cue board clacked and the camera turned.

Movies are the most confusing of the public arts to watch being made; the tiny bits and pieces that later will be spliced into a flowing narrative are almost meaningless in their isolation, and this scene was just one tiny bit of the mosaic. Quinn was to look out of a coach window as the train slowed for the station, then duck back.

THE ancient steam locomotive tooted once and then began grinding toward the station. Extras on the platform craned their necks for glimpses of "loved ones" in the cars, and Quinn peered out. In a cloud of steam the engine stopped. Quinn ducked back and someone shouted "Cut."

But Verneuil, whose "Any Number Can Win" won high critical acclaim in 1963, wasn't satisfied and he ordered retakes. Again and again the train chuffed down the track, extras waved and Quinn looked. Finally, after almost three hours for a 10-second scene, he was satisfied and they prepared for the next shot.

QUINN slumped again in his canvas chair, still looking forward to the climactic scene. He lighted a cigarette, then beckoned to the flack. "Let's talk now; we've got time."

So, how was the picture going?

"It's like playing baseball in the dark," he said in his deep, musical voice. "I hit the ball and I hit it hard, but I won't know if it's a home run till a long time from now — there's no umpire to call it for you. But I feel good; I socked that ball hard."

Quinn, now an established international star (he is one of the few American actors who can work in French, Italian and Spanish as well as English), can take his pick of roles. What governs his selections?

"I'm more interested in what a picture has to say than in what I'd be doing," he said. "If Kirk Douglas or some other actor can do the picture as well or better, then I'm not interested — let him do it. Take 'Zorba the Greek.'

"That script was kicking around for 10 years and nobody wanted to do it. They all said nobody would be interested in an old man making love to some broken-down broad. But it worked for me and got me out from under the shadow of 'La Strada.' Got to keep coining up with surprises in this business."

How does he feel about his role in "The 25th Hour," that of the Rumanian peasant caught up in the maelstrom of war?

"He's a victim of events so much bigger than he is ... I like him better than Zorba. Nobody takes him for what he thinks he is, so he has to decide just what he is. That's what the film's all about: Are we what we think we are or what other people think we are? It adds up to the fact that you must know what you are."

QUINN, whose sensitive performances have won him two Academy Awards and whose "Zorba" almost won him another, has strong feelings about his craft, although he acknowledges no "method" or special style. "I do feel that there's a great danger of oversimplification when talking about acting. They all want a nice, simple generality about it — you do this or talk that way and you're an actor — but I don't think any generality is worth a good damn. I don't deal in generalities."

Then Quinn was needed for another stroke of director Verneuil's cinematic brush. While he was gone the press agent handed out a fact sheet about "The 25th Hour." The script is from a novel by Romanian writer C. Virgil Gheorghiu, who fled to Paris after its 1950 publication in the wake of the regime's displeasure. Ponti is producing it and Virna Lisi is a costar with Marius Goring in support.

Director Verneuil called, "All right, Tony," and Quinn got up. Miss Lisi took her place on the platform with three children and Quinn walked across the tracks to the far platform, his paper-wrapped bundle in hand. He strode up to the knot of extras on the platform, turned around to face the camera. His face was deeply tanned — no makeup was needed, and he nervously plucked at the string on the bundle.

There was a deep silence in the forlorn station as Quinn began the sequence — silence and rapt attention. Rarely in movie making does an individual scene have any impact at the moment of filming. It is too fragmented, too confusing with the lights burning and the camera crew staring at the actors.

But this was the exception. The crew's jokes were stilled; Verneuil was frozen, his hands a frame to wrap about the moment.

QUINN stands on the platform, searching for his family as around him refugees clasp loved ones. His face is hard but despair is just below the surface. Then he looks across the tracks and sees a woman and children — his?

He begins walking across the tracks toward them, his eyes fixed on the group. He recognizes them. His stride breaks, he starts to run, but then, stiff-legged, he slows, his eyes never leaving those of his wife. HIS face is almost — but not quite — a mask. As he nears them his pace slows and his eyes reflect painfully the emotions of a man facing an unbearable moment he has dreamed of for so long. A last slow step and he is with them. Does he accept the third child?

In a moment of consummate skill, or simple art, Quinn shows it all without a word — the joy of being together again, the shedding of the terrors of the past, the hope for a better future tomorrow for all of them — most importantly, for the child of war.

For a long moment Quinn and Lisi are frozen, with the children staring in near awe, in an aching but poignant tableau. Then, almost reluctantly, Verneuil quietly said "Cut."

There was no need for a retake.

Said the chubby moviemaker as his stars Anthony Quinn and Virna Lisi posed against the shattered buildings in the casern, "We looked all ever Europe for something like this. We figured it would cost a fortune to build ruins like these — and here they were all the time."

Although the casern today houses a property disposal area and household goods warehouse, most of the hundreds of acres are just as they were at the end of World War 11 after B17s and B24s had dropped hundreds of 500-pound bombs on the then German Army quartermaster storage area. Great shattered hulks of reinforced concrete buildings droop crazily, roofs are holed and walls lean at weird angles. In one corner of the casern, on Munich's north side, is a U.S. Army elementary school; on the other is a east car park of junked civilian and military vehicles.

And for a few days, it was all as if time had slipped out of joint as Quinn herded refugees into old Nazi army trucks, motorcycles raced about crazily and a helicopter dropped bombs with splendid noise if next to no damage — except to itself when a flying fragment pierced a rotor-blade tip.

As the MGM crew packed up, director Verneuil left one request: "Don't touch it — leave it just as it is. I may need it again soon."