Answering the tug of tradition on Okinawa 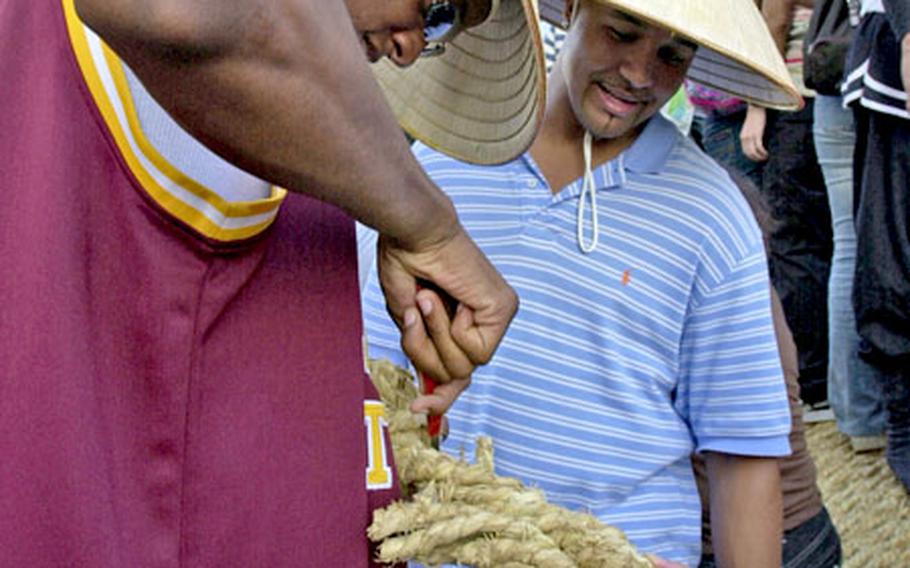 Air Force Staff Sgt. Travis Browner, from the 320th Special Tactics Squadron, cuts a piece off the rope as fellow Staff Sgt. Andre Skeete, from the legal office, looks on. It is said that if you take a piece of rope after the Naha tug-of-war, your family will have good healthy and lots of happiness. (Fred Zimmerman / S&S)

Air Force Staff Sgt. Travis Browner, from the 320th Special Tactics Squadron, cuts a piece off the rope as fellow Staff Sgt. Andre Skeete, from the legal office, looks on. It is said that if you take a piece of rope after the Naha tug-of-war, your family will have good healthy and lots of happiness. (Fred Zimmerman / S&S) 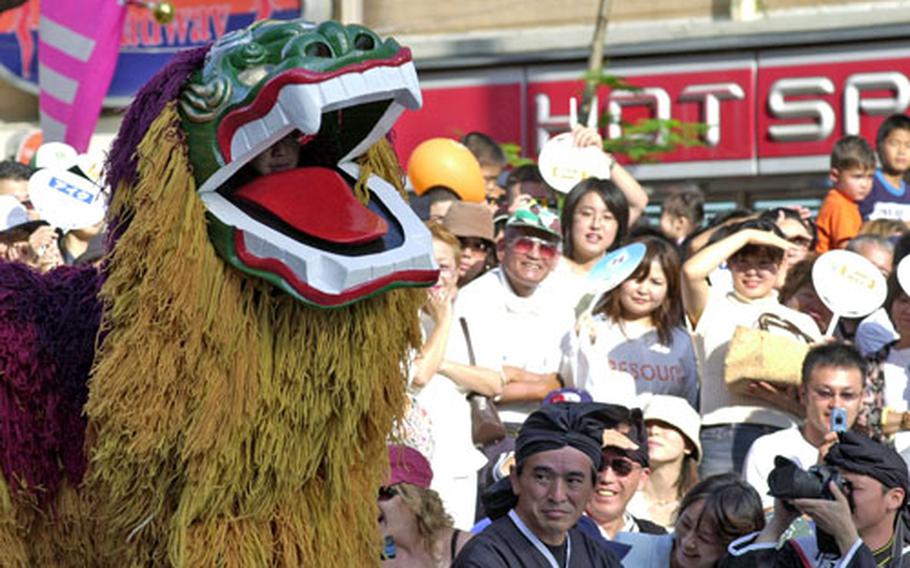 A Shi-Shi dog dance entertains the crowd just before the kick-off of the annual Naha tug-of-war Sunday. (Fred Zimmerman / S&S) 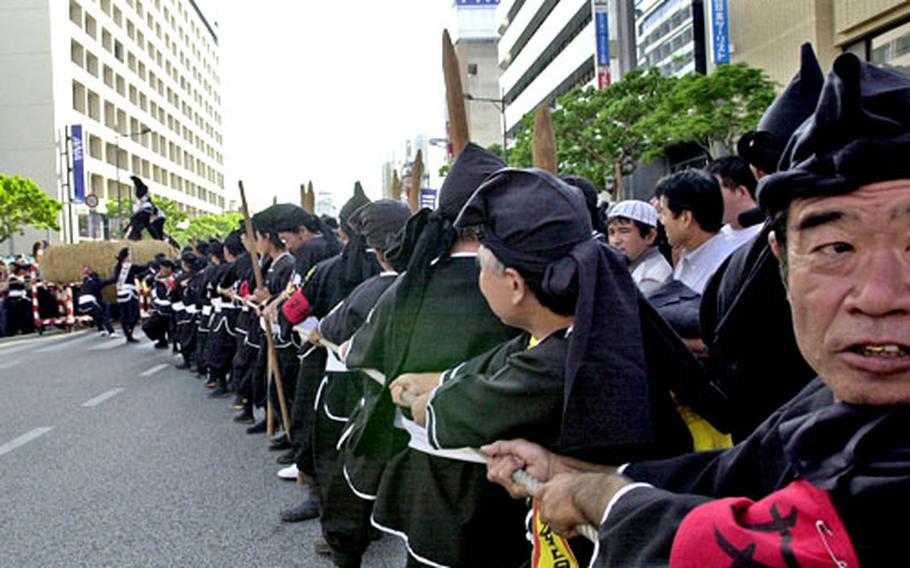 Okinawans dressed in traditional black costumes pull on one half of the giant rope as they prepare to put the two pieces together for the world&#39;s largest tug-of-war. (Fred Zimmerman / S&S) 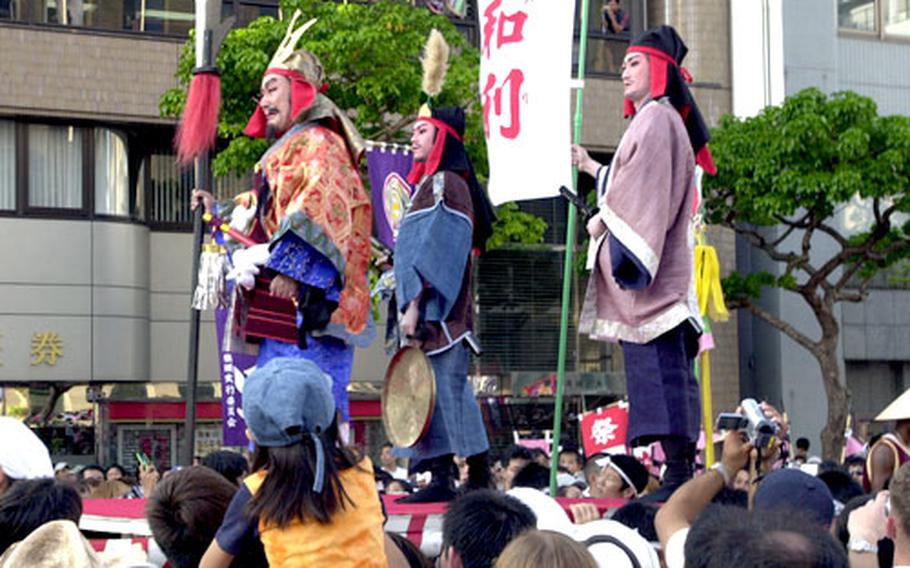 The "king" of Naha&#39;s east side team is carried to the center of the rope to present his challenge to the west side. The west won. (Fred Zimmerman / S&S) 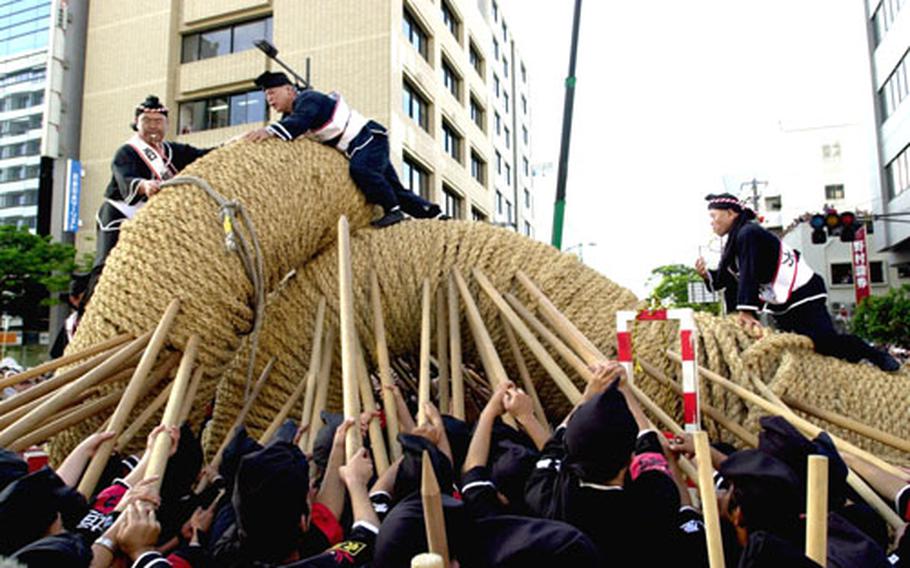 Several men stand atop the two ropes and give orders to those pushing pieces together during the Naha tug-of-war Sunday. Once one end is slipped over the other, a giant wooden peg is inserted to hold the ropes together. (Fred Zimmerman / S&S)

NAHA, Okinawa &#8212; When participants at the Naha Great Tug-of-War say it was an event for the books, they mean it.

The rope is in two pieces. Approximately 90 solid ropes are twisted together to make up its core. The core then is covered with surface ropes. Pulling ropes are attached to the surface. When laid out, the rope looks like a giant centipede.

Before the tug-of-war could begin, the crowd helped pull the two pieces of rope toward each other. When the rope ends were next to each other, men using large sticks picked up the looped the end of one rope and slowly placed it over the looped end of the other.

The process took more than 15 minutes.

Finally, a giant wooden peg was stuck through the two pieces to hold them together.

As every year, the competition pits the east side of Naha against the west.

Once the order was given to begin, men standing on top of the ropes yelled or blew whistles signifying to their teams to tug as hard as they could. A short while later, the shouts of encouragement stopped. The contest was over; the west side had won. Participants then jumped onto the rope and began dancing. Then it seemed almost everyone pulled out a knife.

The custom, Okinawans say, is that the families of those who cut off and take home a piece of the rope will find happiness and be in good health for the year &#8212; a custom that also may explain why the pulling ropes are replaced every year.

Air Force Staff Sgts. Travis Browner and Andre Skeete, both taking part in the festivity for the first time, went home with approximately an eight-foot section of the rope.

Skeete said he was surprised to see how large the rope was.

The annual tug-of-war has been held consecutively since 1971, but Okinawan historians have said the contest dates back to the 17th century.