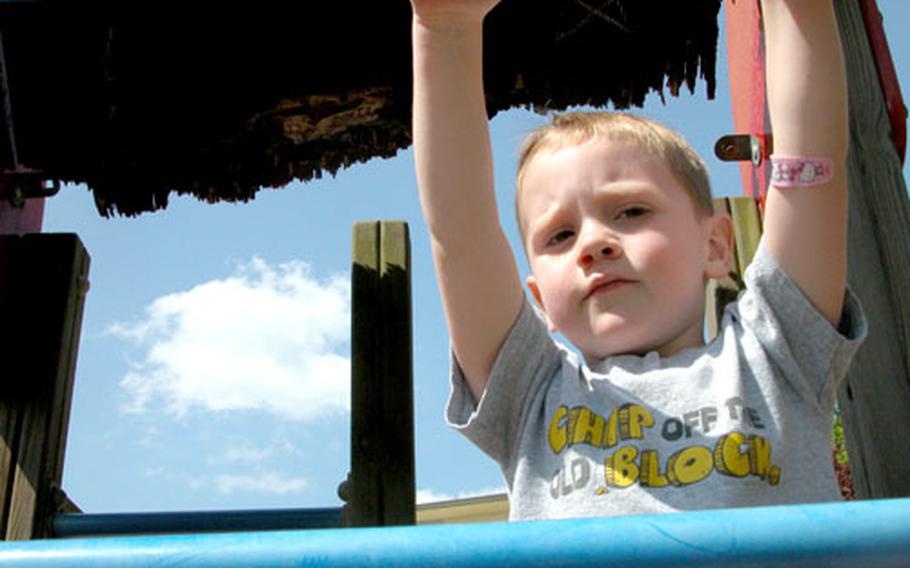 The parents of children like Patrick McGrath, 3, are concerned about the condition of the equipment at Ansbach’s Bleidom Kaserne. (Geoff Ziezulewicz / S&S)

ANSBACH, Germany &#8212; As he does nearly every day, 4-year-old Sean O&#8217;Mara was hanging at the playground on Bleidorn Kaserne. To be precise, he was hanging in the air and moving by hand across some metal rings.

To his mother&#8217;s alarm, one of the rings suddenly fell out of the playground fixture to the sand below.

O&#8217;Mara and some other mothers at this housing area said they&#8217;ve gotten used to dealing with rundown playground equipment. Bolts in a climbing net are detached and hanging out. A wooden roof is crumbling. On another playground nearby, the sand is smelly, filthy and cluttered with debris. Some equipment is old and full of rough, splinter-inducing wood.

While U.S. Army Garrison Ansbach officials stress that new equipment is part of this year&#8217;s plans for the housing area, O&#8217;Mara and other parents said they feel the needs and safety of their children have been neglected.

The deficiencies in the 25-year- old playground should have been addressed sooner and not been allowed to persist to the point where they had to complain, they said.

O&#8217;Mara and other parents said they talked to people in housing and other departments in the garrison, only to get the runaround.

Since she started trying to change the playground situation, the equipment that O&#8217;Mara sees as the primary example of neglect has been roped off and will be removed next month, garrison officials said.

One new set of equipment is already under construction.

Officials from the garrison have been conducting walk- through inspections once a month at playground sites, said Jim Hughes, a garrison spokesman. Normally the garrison hires contractors to inspect and maintain the playgrounds, but the garrison is between contracts right now.

&#8220;Yes, the equipment is old and in need of some repairs, but it is not unsafe,&#8221; Hughes wrote in an e-mail. &#8220;As an additional precautionary measure and because they are scheduled to be replaced, we have decided to rope them off to preclude them from becoming a problem in the coming weeks.&#8221;

While inspections do occur, it is also up to residents to notify the proper people when problems arise, he said.

&#8220;People do need to tell us when they see problems with our playground equipment or anything else within the community,&#8221; Hughes said in an e-mail. &#8220;Were their problems with the playgrounds? Yes, but nothing major.&#8221;

O&#8217;Mara said garrison officials told her that there wasn&#8217;t enough money in the budget to maintain the playground and the grounds in general, a claim that Sharon Martinez, the civilian garrison deputy commander, refutes.

&#8220;Every garrison is facing funding constraints in a number of areas throughout the Army,&#8221; she said, adding that some new equipment is coming from communities in Kitzingen that are closing down. &#8220;We don&#8217;t intend to let that impact the safety of our children.&#8221;