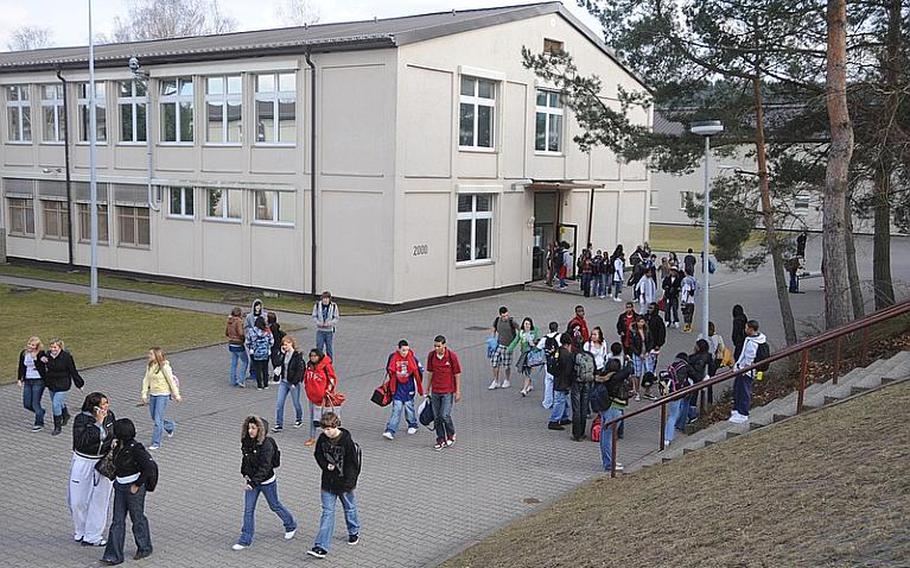 Senior class records at every Defense Department high school in Europe, the one in Kaiserslautern is seen here, are being reviewed for accuracy after an investigation found numerous errors on dozens of student transcripts at a school in Germany over a four-year period. (Michael Abrams/Stars and Stripes)

KAISERSLAUTERN, Germany &mdash; Senior class records at every Defense Department high school in Europe are being reviewed for accuracy after an investigation found numerous errors on dozens of student transcripts at a school in Germany over a four-year period.

The Department of Defense Education Activity had been reviewing graduation regulations as part of a routine review, but the discovery of the irregularities at Ansbach Middle/High School &ldquo;have reinforced the urgency to provide revised guidance for secondary schools,&rdquo; said DODEA spokesman Frank O&rsquo;Gara, in an email.

Separately, DODEA leadership has ordered that all high school transcripts across the Department of Defense Education Activity worldwide be checked for accuracy at least every three years, school officials said.

DODEA is also tightening its graduation waiver policy, more closely scrutinizing exceptions granted by school principals to allow students to graduate without meeting all requirements, and an extensive revision of graduation requirements is under way.

Investigators uncovered widespread, systemic problems with how transcripts were handled at Ansbach, from wrong or double credit given for certain classes, to, in some cases, the altering of course names and grades, according to a heavily redacted report provided by Department of Defense Dependents Schools-Europe officials.

Investigators determined that three people were involved in the mishandling of student records, said Bob Purtiman, spokesman for DODDS-Europe. They were subject to administrative action. Due to privacy laws, Purtiman said he could not disclose their names or positions or what specific action was taken against them. He said no teachers were involved.

The investigation, led by a U.S. Army colonel from an outside organization and two subject matter experts from DODDS-Europe headquarters, determined the errors were not made intentionally to benefit students but were due, in part, to poor record-keeping and lack of understanding of policies, said Harvey Gerry, DODDS-Europe chief of staff.

&ldquo;I think some of it was human error; some of it was trying to ensure the unique needs of individual students were recognized and addressed,&rdquo; he said. &ldquo;I don&rsquo;t think any attempt was being made to circumvent any requirement for someone&rsquo;s personal advantage.&rdquo;

The investigation, conducted in November 2010 and turned over to DODDS-Europe last March, found, among other things, that 56 of 57 seniors at Ansbach last year had transcript deficiencies. More than 20 seniors who were planning to graduate were not on track to meet graduation requirements, though all eventually did graduate, officials said. Investigators wrote in the report that &ldquo;attempts to determine the cause of this situation became a focus point of the investigation,&rdquo; noting &ldquo;there existed a severe lack of student course planning and scheduling.&rdquo; Further explanation was redacted.

Investigators also found that 40 students at Ansbach were allowed to graduate between 2007 and 2010 without meeting graduation requirements and without documentation of a formal waiver, the investigation report states. Credit shortfalls ranged from 0.5 to 4.5 credits.

A waiver may be approved for a student intending to graduate who hasn&rsquo;t met DODEA&rsquo;s graduation requirements, such as not maintaining a high enough grade point average or failure to earn enough credits. The principal, in consultation with the district superintendent, is authorized to approve or disapprove a graduation waiver request, according to DODDS officials. The most common waiver request, Gerry said, is for a student who&rsquo;s transferred to DODDS from a stateside school where the graduation requirements were different from DODEA&rsquo;s.

The concern at Ansbach wasn&rsquo;t that the waivers were granted, Gerry said, but that there was no formal documentation of the decision.

&ldquo;We had to rely on individual memory, incomplete notes,&rdquo; he said. &ldquo;From an administrator&rsquo;s point of view, I should be able to look at a student&rsquo;s record and reconstruct and understand why we are where we are today.&rdquo;

The report also found 69 instances in which students were given double credit for repeating a conditioning course, an elective physical education class that is not identified as a repeatable course by DODEA. Other errors included giving students credit hours for participating in a summer hire jobs program and awarding high school credit for middle school courses that don&rsquo;t qualify for such credit.

To ensure similar mistakes aren&rsquo;t being made in other schools, DODDS-Europe has assigned five small teams of administrators and information technology specialists to examine seniors&rsquo; academic records at all 27 high schools in Europe, Purtiman said.

The review must be completed by the first week of February, which would give students enough time to resolve any problems that could affect graduation eligibility, Purtiman said. The teams will then evaluate all junior class transcripts by the end of the current school year, he said.

&ldquo;We want to have a degree of assurance that this isn&rsquo;t something that&rsquo;s a common issue,&rdquo; Gerry said.

Schools in Europe are also scheduling counselor training, with a focus on transcript analysis, data entry, and interpreting non-DODEA transcripts, as well as academic course scheduling and maintaining a four- or-six-year academic plan for students, according to DODDS-Europe officials.

The transcript irregularities at Ansbach came to light last fall after a student transferred from Ansbach back to the school in which he or she had previously been enrolled. According to the report, someone at Ansbach changed 12 failing grades to passing and awarded six unearned credits due to failure to use the proper grading scale, prompting an inquiry from the other school and launching the investigation.

While school superintendents review a sample of transcripts every year to ensure there are no problems, the issues at Ansbach went undetected for so long because &ldquo;the principal is the person who identifies issues for us,&rdquo; Gerry said. In the case of Ansbach, the principal was aware of the transcript changes but &ldquo;thought it was the appropriate thing to do,&rdquo; Gerry said of then-principal, Jennifer Rowland, who is now retired.

&ldquo;From our perspective, there was never any indication that anything was wrong,&rdquo; he said. &ldquo;The principal had every reason to believe she was acting in her authority.&rdquo;

So far, no other issues have been raised about similar practices or errors at other schools in DODEA, O&rsquo;Gara said. But the Ansbach investigation &ldquo;revealed several areas DODEA must improve upon systemically to protect the integrity of our diplomas,&rdquo; and to ensure consistent and accurate record-keeping.

&ldquo;Improving consistency and accuracy in the administration of student records is a top priority requiring immediate and meticulous attention at all locations,&rdquo; he said.