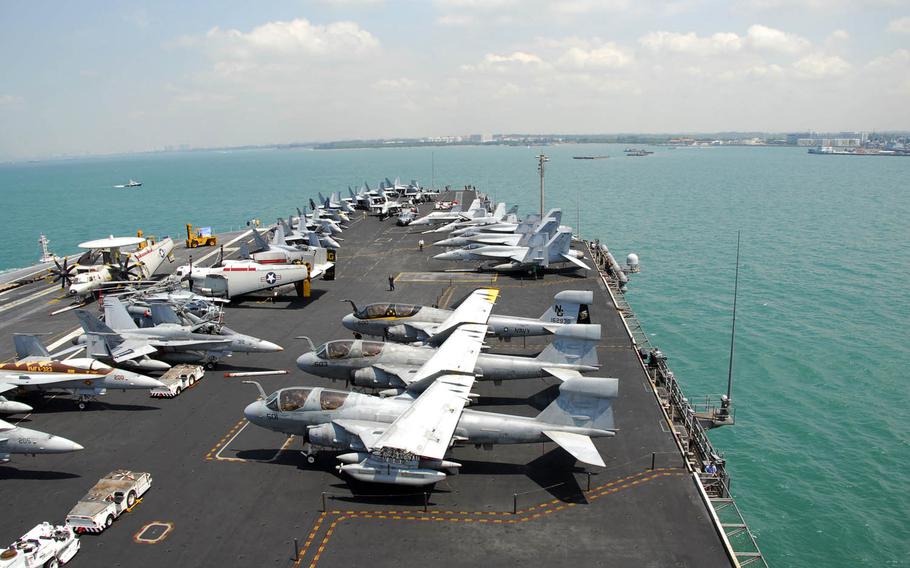 The aircraft carrier USS John C. Stennis transits Singapore harbor before mooring pier side at Changi Naval Base, Singapore, in 2009. A Singaporean woman is the latest former U.S. Navy official to be arrested in connection with a bribery scandal that traded classified ship information to a contractor in exchange for cash, travel and other perks. (Jonathan Husman/U.S. Navy)

YOKOSUKA NAVAL BASE, Japan — A Singaporean woman is the latest former U.S. Navy official to be arrested in connection with a bribery scandal that traded classified ship information to a contractor in exchange for cash, travel and other perks.

Rachael was also charged with two counts of money laundering, according to a statement from Singapore’s Corrupt Practices Investigation Bureau.

Rachael later received about $71,000 in cash from Francis and used the money to buy an insurance policy and a condominium, Singaporean officials said.

Several of those involved — including a Naval Criminal Investigative Service agent who admitted to being on Francis’ payroll — have been arrested and convicted of taking cash, luxury hotel accommodations and, in some cases, prostitutes.

In February, three admirals received letters of censure from the Navy, leading two to quickly retire.

The letters said the admirals received heavily discounted gifts that “would have led a reasonable person with knowledge of the relevant facts to believe that you used your public office for private gain.”

Francis used the information to steer Navy ships toward “pearl ports,” as GDMA employees referred to them, according to court documents. GDMA was able to vastly overcharge ships for fuel, electricity, cleaning and other services as their preferred ports.

Francis pleaded guilty in January to charges of bribery, conspiracy to commit bribery and fraud charges in a plea deal with U.S. federal prosecutors.

Prosecutors say Francis, with help from his naval contacts, bilked the U.S. government out of more than $20 million.