Another daily chore in Vicenza: protest 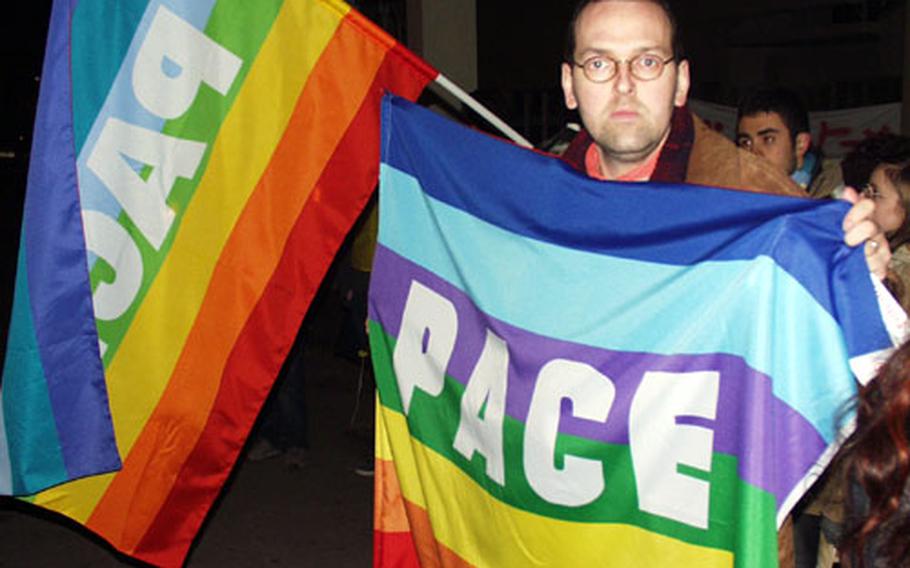 Federico Stella holds up a banner that’s become a common sight lately for many Americans stationed in Italy. Pace is Italian for Peace and the rainbow-hued banners are often hung on walls or porches of those opposed to any conflict in Iraq. (Kent Harris / S&S)

Gradually, in groups of twos and threes, more appear along the darkly lit street that borders part of Caserma Ederle, the main American military base in the Veneto region.

At about 9 p.m., the crowd reaches its peak: about 60 Italians voicing their displeasure with America&#8217;s policy toward Iraq. About an hour later, everyone is gone &#8212; leaving pretty much the way they came.

Welcome to protest night in Vicenza. It&#8217;s about as low-keyed an anti-war demonstration as there is in Europe. And it&#8217;s also as regular as clockwork.

The protests are scheduled from 8 to 10 p.m. each Thursday night, across the street from what used to be known as the main gate of the facility.

&#8220;It&#8217;s just to show the people that we&#8217;re here, and we are against war,&#8221; said Ernesto Pettrachim, gesturing across the street, past the assorted Italian law enforcement personnel at the base&#8217;s entrance. Americans avoid the spectacle, having been warned to stay away.

So gather they do, and protest as well. The demonstrations mainly amount to holding up a few banners. A few people bring megaphones and chant an anti-war message for a minute or two. But most stand there, talking among themselves.

The protesters are just as irritated at their prime minister, Silvio Berlusconi, and his government for supporting the American cause. The government is violating its own constitution by doing so, says Cristina Tofannin, through an interpreter.

Protesters come from a disparate group. Several organizers &#8212; religious, peace and general left-leaning political groups &#8212; are represented. The presence of Pettrachim and three others means that almost half the city&#8217;s Greenpeace contingent is there. But so are others.

They do share several common ideas: a general disdain of Iraqi leader Saddam Hussein and the certainty that the United States is pursuing other interests &#8212; mostly economic ones &#8212; with the possible war.

Some, including Macripo, go a bit further. They say that an international effort at regime change may be a good idea. But not through war.

All suggest the United States has ulterior motives for invading Iraq. Oil is often mentioned. Trying to be fair, they also acknowledge the economic interests of such countries as France and Russia &#8212; two opponents of U.S. action in Iraq.

Thursday&#8217;s turnout was one of the biggest yet. Organizers say they&#8217;re disappointed they don&#8217;t have more people attending. But they believe that many Italians agree with them.

&#8220;It&#8217;s difficult to move people from their homes,&#8221; Macripo said with a shrug of her shoulders. And many Italians don&#8217;t want to engage in activities that might be seen as anti-American, she added.

Protesters decided to adhere to the specific timetable for the protests to give people a place to vent their feelings. They say they&#8217;ll keep showing up as long as it&#8217;s necessary.