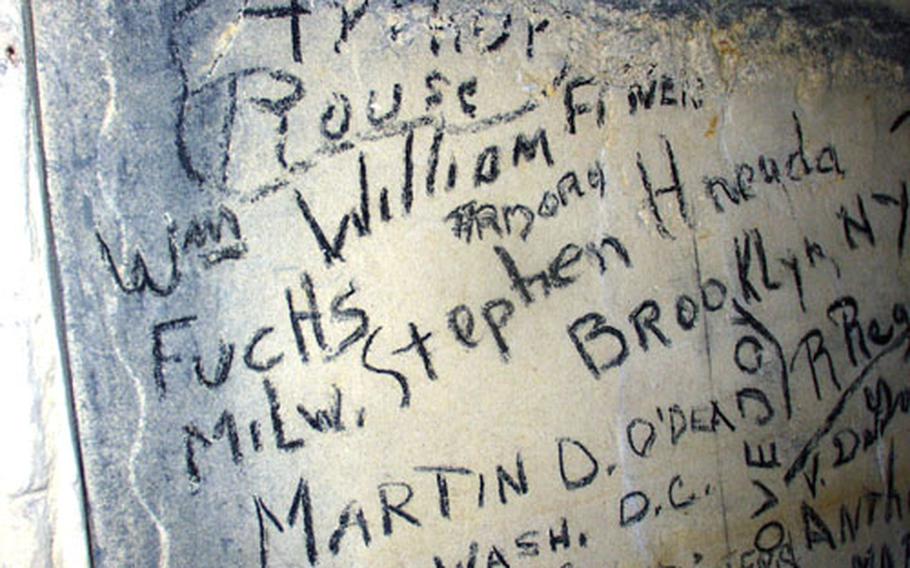 The names of World War II U.S. Army troops headed for the Battle of the Bulge adorn the wall of a cave near Maastricht, Netherlands. The troops had gathered in the cave for a Christmas Eve Mass in 1944. For years, local residents, along with some Americans from the nearby Army post at Schinnen, returned to the cave for a Christmas Eve service in their honor. The cave currently is closed for safety reasons. (Kevin Dougherty / S&S)

MAASTRICHT, Netherlands &#8212; Staged in a cold, dark venue, the Christmas Eve gathering long had been one of the toughest tickets in town.

The fortunate few, maybe a couple of hundred people in all, would enter a cave near Maastricht and make their way down a wide adit via candlelight. Priests and monks would soon come into view, as would scores of names hastily scrawled in charcoal on a cave wall more than a half-century ago.

On Christmas Eve 1944, U.S. soldiers leaving shortly for the Battle of the Bulge stepped into this cave for an evening Mass. Most of the estimated 300 soldiers who attended the service didn&#8217;t live to see the coming spring.

The locals never forgot the soldiers, and for many years hence they &#8212; including some Americans from the nearby Army post at Schinnen &#8212; would return to the cave for a Christmas Eve service in their honor.

Since last year, it also has been off-limits &#8212; and will remain so for at least another Christmas because of safety concerns.

For several years, a local nonprofit foundation chaired by Br&#252;ll had been leading an effort to shore up the cave, particularly a 150-foot section near to where the World War II soldiers gathered. But environmental concerns, permits and issues with a government-controlled fund for such projects has stalled the project.

Organizers had hoped to have the section patched up for this Christmas, but soon realized that wasn&#8217;t going to happen. Fer Rouwet, the project engineer, said if he had all the money and necessary approvals, the job could be done in six months.

The soldiers who gathered in the cave on that bitterly cold December night knew they would soon leave to confront Adolf Hitler&#8217;s massive counteroffensive in the Ardennes. At the time, Maastricht was a rest-and-recuperation stop, as well as a logistics center where a soldier could see a gunsmith or have his boots repaired.

Local monks &#8220;were discussing having a Christmas celebration in the cave&#8221; before the German offensive, said Father Mario Boonman, who belongs to the monastery that conducted the service. That development, he added, convinced his order to proceed with its plan.

A contingent of 42 monks participated in the 1944 Mass. A monk by the name of van Grinsven recounted the service in an interview shortly before his death.

&#8220;We drove up that silent road upon the hill that led to the cave,&#8221; recalled van Grinsven, who sang in the choir. &#8220;The soldiers were already present. They looked a little bit strange to me. Not the way I imagined them to be. I was surprised that these rough men could be so pious.

For five out of six soldiers standing in the cave that night, it was. Death even befell the Catholic priest from New York who led the Mass. Of the estimated 300 soldiers who attended the service, only 50 made it home.

The nonprofit group Br&#252;ll chairs estimates the project will cost 1 million euros. About a quarter of it already has been raised, but Br&#252;ll said without more private donations his group has no option other than to turn to the government. And that, he has found, comes with strings attached.

Br&#252;ll said he fears this avenue could extend the effort by three to five years, but Rouwet, the project engineer, has his sights set on 2008.