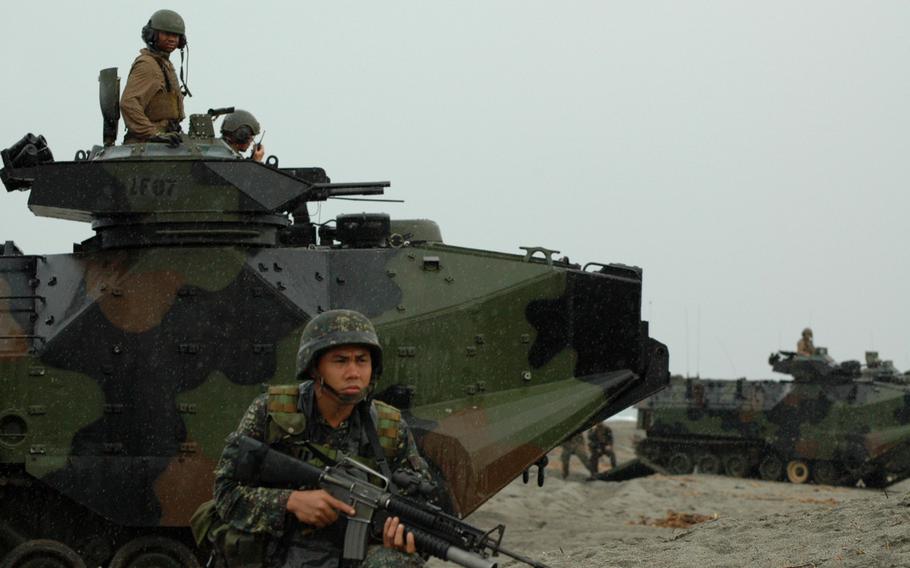 TOKYO — The United States begins its 21st annual Cooperation Afloat Readiness and Training on Monday in the Philippines, kicking off a five-month series of exercises that will include several Southeast Asian countries.

The opening ceremony in Puerto Princesa, on Palawan island, takes place as the Philippines aims to strengthen its relationships with the U.S. and Japan while maintaining claims to islands held by China that lie within the Philippines’ exclusive economic zone.

CARAT is a blend of shore-based exchanges and operational exercises that feature a wide range of naval operations, including surface, undersea, aviation and amphibious warfare. About 300 U.S. servicemembers will join the five-day Philippine exercise, which includes joint tactical maneuvers and a search-and-rescue component.

The littoral combat ship USS Fort Worth, which is in the middle of its 16-month deployment to Singapore, will participate in operations with Philippine armed forces. Diving and salvage ship USNS Safeguard and a Navy P-3 Orion surveillance aircraft will also join CARAT’s Philippines leg, Navy spokesman Lt. Arlo Abrahamson said Friday.

CARAT’s Philippine operations will take place over the Sulu Sea, off eastern Palawan, Navy officials said. One of the region’s most pressing security concerns lies off the island’s west coast in the South China Sea.

The Spratly Islands — a collection of rocks, reefs and shoals — are claimed entirely by China, despite overlapping claims to some of them by the Philippines, Taiwan, Vietnam, Malaysia and Brunei. Although few of the territories can naturally sustain human life, they lie in fertile fishing grounds and near sea lanes where about $5 trillion in global trade transits annually.

During a speech June 3 in Tokyo, Philippine President Benigno Aquino compared China’s assertive claims on the Spratlys and the South China Sea to Germany “testing the waters” with small invasions in the 1930s.

“If there was a vacuum, if the United States, which is the superpower, says ‘We are not interested,’ perhaps there is no brake to ambitions of other countries,” Aquino said.

China has imposed fishing regulations on Philippine boats and engaged in non-combat showdowns with Philippine ships repeatedly in recent years. Chinese ships have attempted to block the resupply of Philippine marines garrisoned at the Second Thomas Shoal, a territory 120 miles from Palawan that China also claims.

Waters within 200 nautical miles are generally considered part of a nation’s exclusive economic zone, but China claims about 90 percent of the South China Sea based on what it deems as historical discovery.

The Philippines’ territorial claims against China are pending before an international tribunal, but China has declined to participate.

The U.S. takes no position on the islands’ sovereignty but opposes what officials have deemed coercion by China. Last month, Defense Secretary Ashton Carter noted that China had constructed more than 2,000 acres of artificial islands on top of some of its claimed reefs and added defensive fortifications.

In light of China’s actions, Congress added $425 million to a pending defense authorization bill that would help the Philippines and other nations in the region conduct military exercises and acquire equipment, Sen. John McCain told reporters at a security summit in Singapore last month.

Last year, Aquino and President Barack Obama shook hands on an Enhanced Defense Cooperation Agreement that would grant U.S. servicemembers access to several Philippine bases. The agreement represents the biggest shift in U.S.-Philippine security ties since lawmakers in Manila closed U.S. Naval Base Subic Bay in 1992. However, the agreement has been held up by petitions to the Philippine supreme court.

Earlier this month, a group of 13 Philippine senators sent a resolution to the supreme court calling on judges to uphold the senate’s authority to review treaties, which could further delay the agreement. In the meantime, the Philippines has sought security help from other close U.S. allies.

“Both countries share serious concern on unilateral actions to change the status quo in the South China Sea, including large-scale land reclamation and building of outposts,” said a joint statement on the partnership.