Annual Bulge hike to include dedication of monument 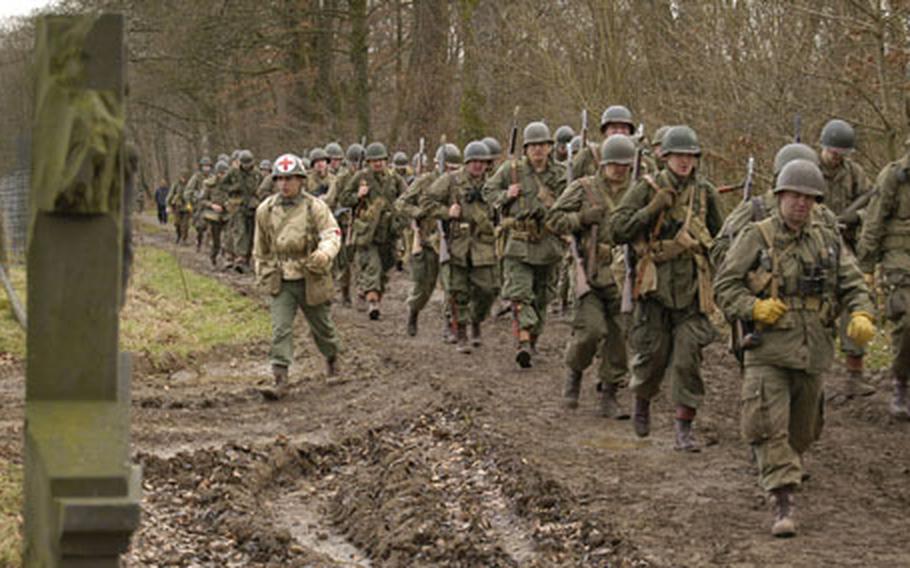 An annual hike commemorating the World War II exploits and sacrifices of the 82nd Airborne Division is planned for late February, with this year&#8217;s focus on an area of the Ardennes Forest near the Belgian city of Stavelot.

Like the Bastogne Walk held every December, the event takes participants down roads and trails used by U.S. soldiers during the Battle of the Bulge. The 2008 hike, about 14 miles long, will include the dedication of a new monument.

Since it was inaugurated in the early 1980s, the annual walk has grown from just a handful of participants to several hundred. Goode, one of the organizers, said at least 800 people are expected to attend the Feb. 23 march.

While the Bastogne walk commemorates the 101st Airborne Division, its February counterpart pays homage to the men of the 82nd Airborne Division. The latter event tends to be smaller and more intimate, with folks less spread out.

This year&#8217;s trek begins and ends at Noirefontaine Farm, which is southwest of Stavelot and Trois-Ponts, not far off the highway linking Bastogne with Liege.

During the Battle of the Bulge, the largest land battle in Army history, the area around Malm&#233;dy, Stavelot and Trois-Ponts initially fell to the 1st Panzer Division and its SS commander, Col. Joachim Piper. His men were later implicated in the massacre of at least 300 U.S. prisoners of war and more than 100 Belgian civilians.

Next month&#8217;s march will focus on the areas where the 505th Parachute Infantry Regiment and 551st Parachute Infantry Battalion fought, which includes Trois-Ponts and Basse-Bodeux, up the road from Noirefontaine Farm. Organizers plan to dedicate a monument to Company A, 551st PIB, near the village of Dairomont. The company conducted a bayonet charge against German troops, one of the few such assaults in the European theater, according to organizers.

Anyone interested in more information, including registration, can go to the following blog site: http://82airbornemarch08.blogspot.com.

The registration fee is 6 euros. That covers logistical support, a hot soup lunch, a post-walk drink (hot red wine) and a souvenir certificate.